There’s a relationship between gold and oil that’s worth understanding because each,

being valued in U.S. dollars, putatively serves as a measure of inflation and, since both commodities have a common denominator, it’s easy to price one against the other. Ergo, the gold/oil ratio i.e. the price of gold expressed in barrels of crude, and the current gold/oil ratio begs the question: “Is gold getting pricey or is oil too cheap?

The above introductory comments are edited excerpts from the original article by Brad Zigler who goes on to say:
In the modern era the gold/oil ratio has averaged 15-to-1, meaning one ounce of gold buys 15 barrels. That’s an average, mind you. There have been serious excursions in either direction. 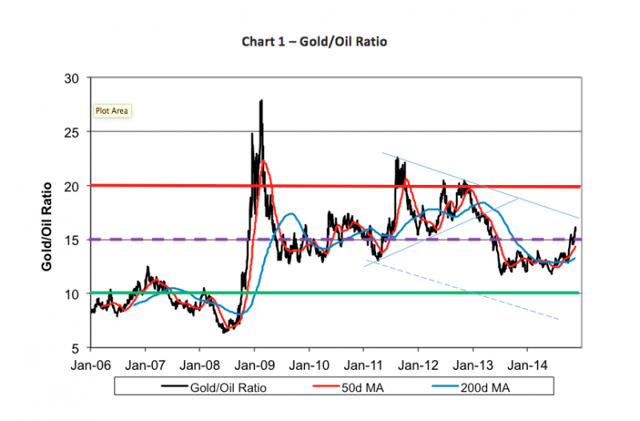 That roller coaster ride provided savvy-and nervy-traders several profit opportunities. There is, for example, a spread recognized between Comex gold and cash-settled Nymex oil futures contracts. In one trade, one could have bought gold and sold oil to ride the ratio skyward, then flipped the trade over to surf the ensuing plunge. Less adventurous bettors could have used exchange-traded funds and notes in their securities accounts.

Why bring this up now? Hindsight is always 20/20 and forecasts…tend to be murky, but a look at the current gold/oil ratio in Chart 1 above…shows our first foray above the 15-to-1 average in over a year.

That leads us to two questions:

Since 1970 there has been a 92.3% correlation between the price of gold and oil. The current gold to oil ratio is 11.8. If the ratio were to resume its historical average of 15.5, the gold price would be…

The value of gold relative to oil (Brent Crude) is an embarrassing 11.2 to 1 ratio – way below its historical average – thanks to the manipulation by the Fed and member banks. When the price revalues higher it will do so SHARPLY and it will be PAINFUL for those on the wrong side of the trade or in worthless paper assets. Let me explain why that is the case.

Since gold is physical liquid money and oil is an essential commodity for the economy, it is normal that they correlate negatively in real prices. When the economy goes well, demand for oil increases, whereas demand for gold diminishes. However, if inflation hits, the nominal prices of both assets increases at the same time with inflation…

What Is Basel III? What Will Its Impact Be On the Gold Price?