$1,000 and perhaps even testing the $850 level to break the back of gold bugs and get the CNBC cheerleaders to claim the gold bull dead.

The above introductory comments are edited excerpts from an article* by Doug Eberhardt (buygoldandsilversafely.com) entitled Is Deflation Still A Threat To Gold?.

Eberhardt goes on to say in further edited excerpts:

When you talk to investors as to why they buy gold many: 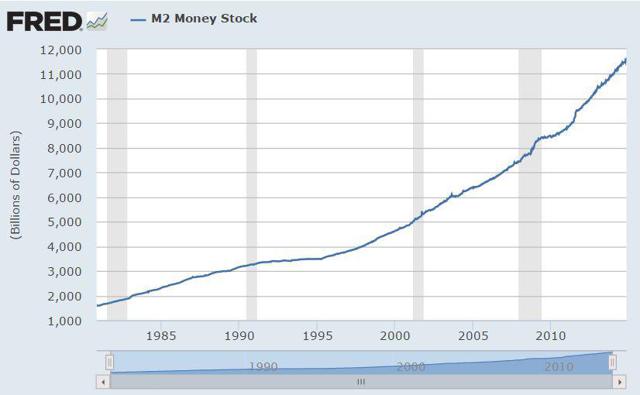 The Fed doesn’t like this [lack of circulation] but even putting interest rates to zero won’t force consumers and businesses to spend. We have not seen this much of a decline in velocity in the 54 years that the Federal Reserve Bank of St. Louis has provided the chart presented below…This is a modern day unprecedented issue the Fed is fighting and is a possible precursor to more QE down the road if necessary to get money moving (inflation target of 2%). 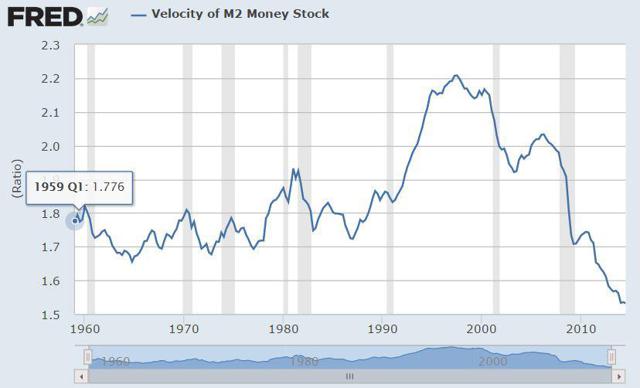 When Bernanke was Fed Chairman he was very clear in his 2002 speech Deflation: Making Sure “It” Doesn’t Happen Here what the Fed would do during deflation…and there is no doubt in my mind that the Yellen-led Fed would implement more QE if interest rates started to shoot up past 3.06%. 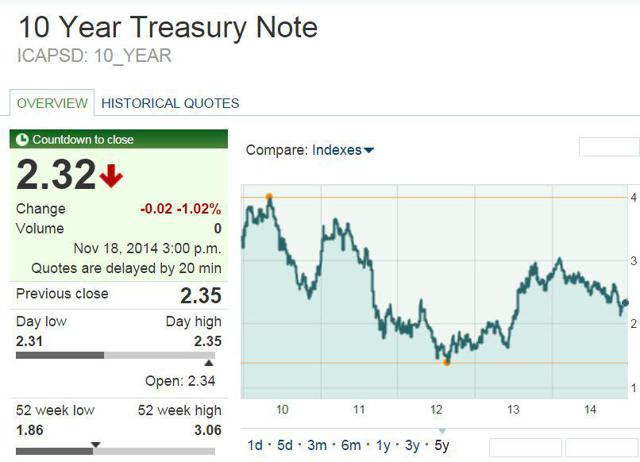 A decline of .02 on the 10 Year Treasury Note was the reaction for interest rates today despite the better than expected PPI report.

While we will get bounces in various commodities from time to time, like natural gas of late with the onslaught of winter snow hitting 50% of America earlier than expected, they are still mired in deflation and the Fed just can’t see it.

Have you seen commodity charts since 2011? Below is a chart of the Continuous Commodity Index (CCI)…[which] is the CRB index in its original equal weight form from 1957. 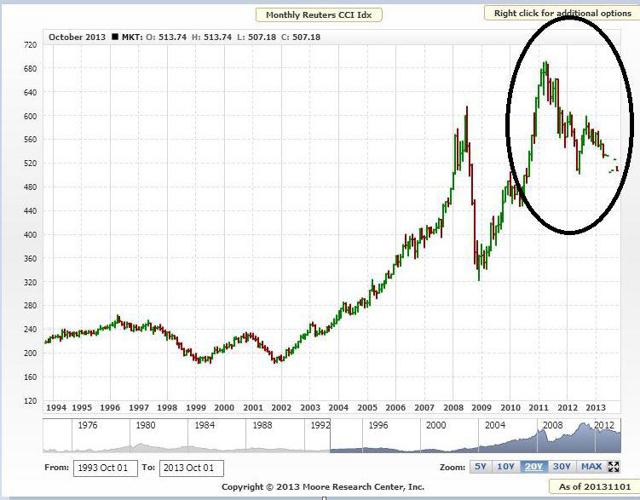 As you can see from the above chart, the 17 commodities that make up the index, including grains, oil and metals, [have] all…[been] falling in price since 2011. Sure, when you go to the grocery store you’ll see many products that have higher prices but some of that is related to the California drought driving up food prices…

As you can see from the chart below the dollar has been bullish since 2011. This just so happens to be the year for the top in gold and silver. Deflation has a tendency to be dollar bullish, the opposite of inflation… 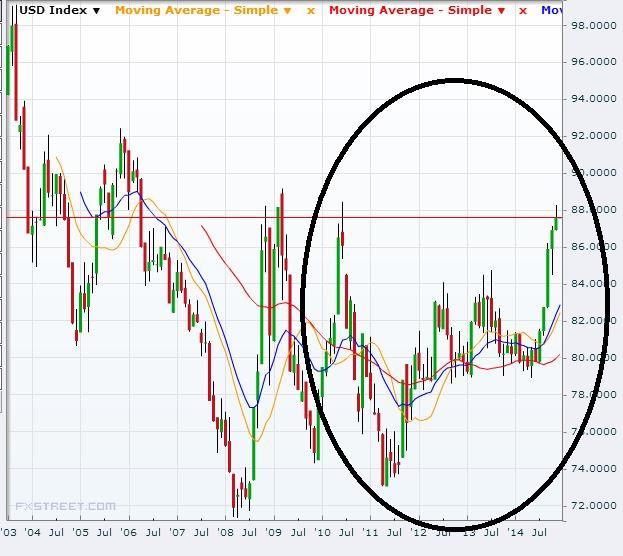 …In order to become more competitive and see your economy grow, you have to make your currency weaker. Currencies that are too strong or too weak not only affect individual economies, but tend to distort international trade and economic and political decisions world-wide…This is compounded by the fact that individual consumers can benefit from changes in the value of a currency, while producers in the same country are hurt…

Japan and Europe had worse than expected data come out this week.

Does the Fed not see that this could have an effect on the U.S.? Are some of the M&A deals offsetting the fact that American industrial production declined? Is the stock market possibly overvalued or does price action trump everything and follow the trend higher with stops? The trend is your friend and it sure hasn’t hurt those with 401k’s.

…Perhaps the Fed believes the consumer knows all, but clearly they don’t despite October’s good consumer confidence numbers. Maybe the Fed should listen to the Measure of CEO Confidence where “slightly more than 44% of business leaders anticipate economic conditions will improve over the next six months, down from 53% last quarter”…

The Fed is Reactive

The Fed reacts AFTER the fact…[They] lowered interest rates pre-2008 to…stimulate the economy… [and we had] the financial crisis of 2008 and, when this current lower interest rate experiment fails, we will see more intervention. Anyone see a pattern here?…Eventually the U.S. will be swallowed up even more into this deflationary spiral and the Fed will fight it all the way…

How All this Deflation Relates to Gold Today

Gold prices are still feeling the effects of many of the issues I brought up above. This includes:

One can not ignore the above.

My advice is to still dollar cost average into a position in the metals. While many utilize ETFs… to play the metals I think an investor should hold the real thing. Some may say that is because I sell the physical for living, but when you analyze the prospectus and see that these ETFs are not insured and the other problems associated with them, I view them only as trading vehicles.

Since 1999 the gold price has moved in concert with the growth in the US Federal Reserve Balance Sheet including the recent correction in both during the past three years. Accordingly, the following objective analysis forecasts the gold price out to 2016 based solely on historical Central Bank data. END_OF_DOCUMENT_TOKEN_TO_BE_REPLACED

The internet is awash with analysts who believe that gold is going UP to $10,000 or DOWN to $1,000 and that silver is going DOWN to $15 or UP to $300. They grab a lot of attention in the media which must soothe their egos but are their prognostications worth paying attention to or are they just a lot of hot air? This site has decided to call their number. END_OF_DOCUMENT_TOKEN_TO_BE_REPLACED

Share
Previous Gold & Silver: “It is difficult not to get overwhelmed in the excitement of what is to come” (+2K Views)
Next Only These 42 Analysts Dare Predict When – and At What Price – Gold Will Peak (+3K Views)