Global Liquidity To Cause (or has already caused) Housing Bubbles In U.S. & Internationally

Lorimer Wilson May 29, 2016 Comments Off on Global Liquidity To Cause (or has already caused) Housing Bubbles In U.S. & Internationally 2,367 Views

…It is clear global real estate prices are heating up again and, due to interest rates

being lower now than in the previous cycle, real estate prices in the U.S. and globally may actually surprise us with several more years of growth before they peak…as global liquidity searches for the few relatively safe assets (in the least dirty shirt fashion) as a way to protect against reflation and devaluation in non-U.S. countries…

A guest post by Martin Vicek, originally entitled This Is What Will Cause The Next Financial Crisis, which has been slightly edited ([ ]) and abridged (…) to provide a faster and easier read.

In the U.S., relative to historical averages, the median price/income ratio (NYSEARCA:XHB) is now 1.5 sigma higher than the average figure for the past 40 years. In terms of the standard deviation from the median, we are already more than half way to the previous peak that ended very infamously in 2008/2009. Arguably, this echo-bubble should reach a lower peak as some investors will remain more careful than last time due to the relatively recent vivid memories of the previous bubble. If we believe this scenario, the U.S. housing prices will probably peak in a year or so. 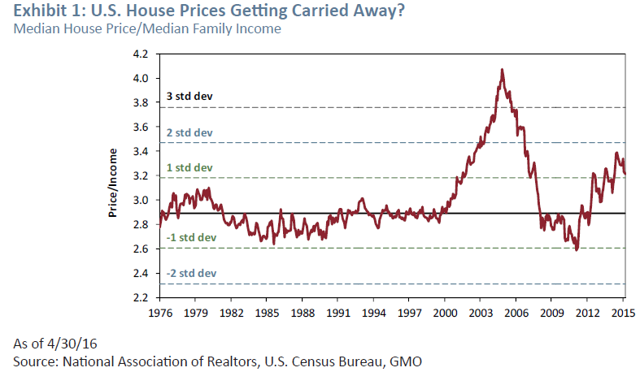 …My educated guess, [however,] is that the peak will reach above 2 sigma but below the last peak’s ~3 sigma above the mean, and this could take about 18 months to two years… Of course, there is no average house and some housing markets will peak sooner than others, within the U.S. and internationally.

The U.S. seems to be in a relatively solid spot relative to many other countries as the post-2009 price correction was very deep. However, even the U.S. already shows elevated levels of median income/price ratios above the historical average…


In fact, many real estate markets around the world have been on fire much more than the U.S. market, partly due to the local currency devaluation effects caused by the sharp dollar rise relative to the local currencies. While housing prices in real terms are much lower today in the U.S. than during the previous peak, they are already significantly above 2008/2009 in Canada, Australia, and the UK, among other countries (see chart below). Hong Kong is the champion where the bubble already seems to be bursting or at least correcting and being volatile both ways. 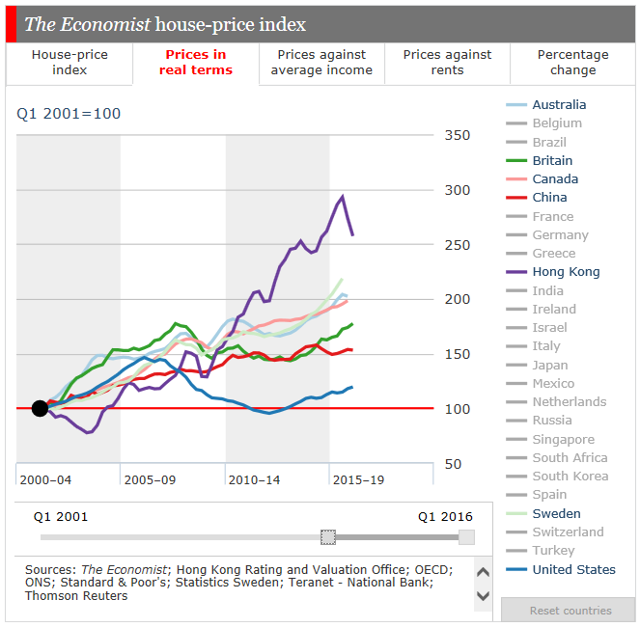 In terms of how expensive houses are for an average person, housing in many countries is already well above the previous peak. In most of these countries, even the price-to-income ratios for real estate have already surpassed the previous peak levels. This is certainly the case for Hong Kong, Australia, Sweden, Canada and soon will be for the UK. 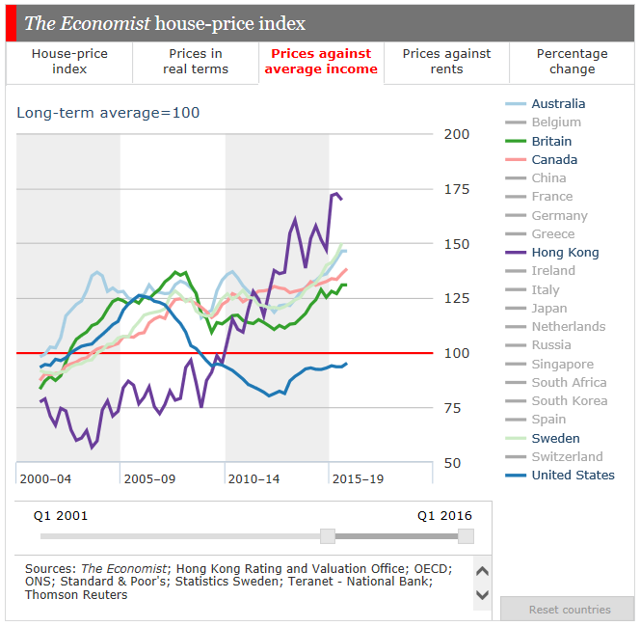 The most recent YoY growth in many markets has been brisk, to say the least, with prices in Qatar rising ~15% while New Zealand, Hong Kong, and Sweden all jumped more than 10%. 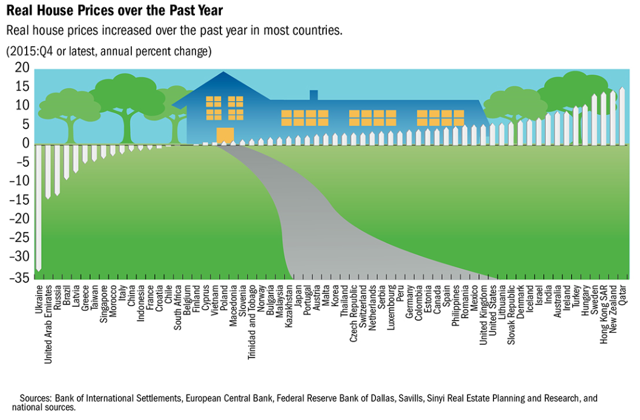 The ultra-cheap money continues to chase various assets around the world, and real estate prices in many countries today are higher than they were in 2008 both in real price terms as well as in relation to average household income. Hong Kong, Australia, Sweden, Canada and the UK are some of the markets where investors should make sure they are buying good value before making the move. I am not calling an immediate bubble pop even in these markets. It is too soon in my opinion.

Due to interest rates being lower now than in the previous cycle, real estate prices in the U.S. and globally may actually surprise us with several more years of growth before they peak this time. The bubble may grow bigger and more dangerous (fall even further) this time. U.S. real estate prices may even accelerate to the upside in the near term as global liquidity searches for the few relatively safe assets in the least dirty shirt fashion as a way to protect against reflation and devaluation in non-U.S. countries…

Share
Previous A Disaster Of Epic Proportions Is Brewing Behind the Scenes
Next Noonan: Take A Look – Gold & Silver Turnarounds Evident In the Charts