Get Your Head Out Of the Sand – the Red Flags Are Starting to Flap!!

will happen in the future but the fact that so many red flags are appearing all at once has got to give any rational person reason for concern. What red flags, you ask? Read on!

By Michael Snyder (theeconomiccollapseblog.com). The following is an abbreviated version of the article* as originally posted under the title Two More Harbingers Of Financial Doom That Mirror The Crisis Of 2008.

It may not seem like it to most people, but we are right on track for a major financial catastrophe.  It is playing out right in front of our eyes in textbook fashion.  It is going to take a little while to unfold but when it finally bursts, the consequences could be quite horrifying.

[Below are some of the red flags that are now fluttering in a breeze that is about to become a howling gale:]

When economic activity starts to slow down, inventory tends to get backed up and that is precisely what is happening right now…The wholesale inventories to sales ratio has now hit a level that we have not seen since the last recession.

As Wolf Richter recently said: “In December, the wholesale inventory/sales ratio reached 1.22, after rising consistently since July last year, when it was 1.17. It is now at the highest – and worst – level since September 2009, as the financial crisis was winding down:

Rising sales gives merchants the optimism to stock more but because sales are rising in that rosy scenario, the inventory/sales ratio, depicting rising inventories and rising sales, would not suddenly jump. In the current scenario, however, sales are not keeping up with inventory growth.”

We usually see a spike in the 10 year Treasury yield about the time the market is peaking before a crash and, as Jeff Clark recently explained,

…The 10-year Treasury note yield has ALWAYS spiked higher prior to an important top in the stock market. For example,

Let’s be clear… not every spike in Treasury rates leads to an important top in the stock market but there has always been a sharp spike in rates a few months before the top.

Finding this article informative? Then “Follow the munKNEE” on Twitter and Facebook for a link to every new article as posted – and don’t forget to “follow” or “like” the articles while you’re there so your friends can become informed as well. They’ll appreciate it.

Not into Facebook or Twitter? No problem. Subscribe (sample here) to our FREE “Market Intelligence Report” newsletter for access to every new article posted in the last day or two. It has an easy “unsubscribe” feature should you wish to do so at any time for any reason.

Economic activity is rapidly slowing down on the other side of the planet as well exemplified by the dramatic decline in January in: 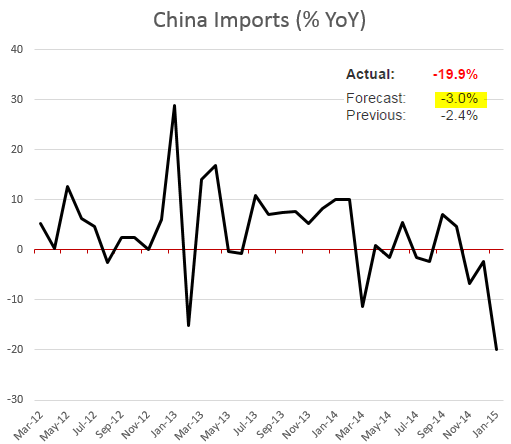 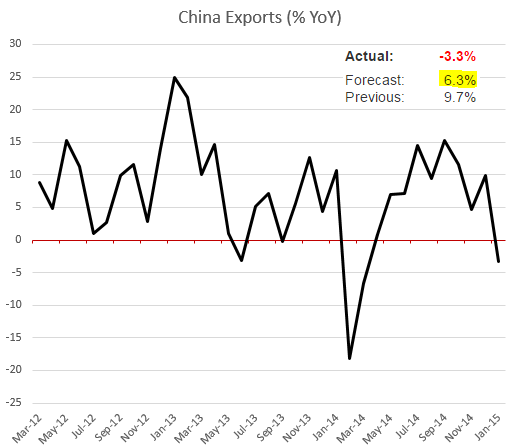 (The above 2 charts were sourced from SoberLook.com**.)

In light of so much bad economic data, it boggles my mind that stocks have been doing so well, but this is typical bubble behavior.

Unfortunately, most people these days do not have the patience to watch long-term trends develop.  Instead, we have been trained by the mainstream media to have the attention spans of toddlers, bouncing from one 48-hour news cycle to the next eagerly looking forward to the next “scandal” that is going to break, and when the next financial crash does strike, the mainstream media is going to talk about what a “surprise” it is.

For those of us who are watching the long-term trends, however, it is not going to be a surprise at all.  We will have seen it coming a mile away.

1. An Economic Crash Seems Likely This Year – Here’s Why

Dozens (dare I say hundreds?) of “analysts” (should I say alarmists?) are convinced that the U.S. economy (and that of the world for that matter) is going to hell in a hand basket – and soon. How sound are their analyses of the current economic situation? Will they be proven to be very insightful or nothing less than fear mongers looking for attention? Their views are all here. You be the judge. END_OF_DOCUMENT_TOKEN_TO_BE_REPLACED

2. “Checkmate” Is Right Around the Corner For Stock Market & Economy – Here’s Why

Economically we are experiencing the birth pangs of the coming Great Depression and, as we get closer to the crisis that is looming on the horizon, they will become even more powerful. The warning signs are all there – we just have to be open to what they are telling us. This article identifies the many parallels between past economic downturns and what is happening right now. END_OF_DOCUMENT_TOKEN_TO_BE_REPLACED

Fasten your seat belts! Below is my forecast of what will unfold in the U.S. in 2015. Forecasts related to geopolitical particulars (covering Russia, China, Japan, USA, Europe & the Islamic State) and financial matters (covering banking & oil) are covered in subsequent posts. END_OF_DOCUMENT_TOKEN_TO_BE_REPLACED

The Japanese government simply cannot allow interest rates to rise, or it would face an economic catastrophe of the first order. Therefore, my simplistic conclusion is that it won’t but, since the only way you can control interest rates and a rapidly growing bond market is to ensure adequate purchases and demand, and since the only real demand in the country is from the Bank of Japan, the BoJ will continue its radical experiment in quantitative easing. We are talking about a level that is two to three times (in relative terms) the magnitude of recent quantitative easing of the United States – and that is today. END_OF_DOCUMENT_TOKEN_TO_BE_REPLACED

The euro is not a currency; it is an experiment. It will not be a currency until France has a true crisis in which the European Union has to decide whether to keep the euro and create a fiscal union or to dissolve into competing currency environments that will allow for adjustments among different countries. Either path will be horrifically expensive. END_OF_DOCUMENT_TOKEN_TO_BE_REPLACED

I think there is a 70% probability that China will suffer either a hard landing OR a long period of Japanese-style stagnation in the next 5 years and, in the event that the Chinese government is forced to absorb nonperforming loans to prevent a debt crisis), the probability is over 95%. END_OF_DOCUMENT_TOKEN_TO_BE_REPLACED

7 major trends are going to sweep over the globe in the next 5 years causing a tsunami of change for the global economy. This article looks at the major impact trends 4 through 7 will each have in their own right. END_OF_DOCUMENT_TOKEN_TO_BE_REPLACED

8. Skyrocketing U.S. Dollar Is a VERY Bad Sign For Global Economy – Here’s Why

9. Are These Views Of the Economy Fear Mongering OR Insightful? You Be the Judge

Will 2015 be a year of financial crashes, economic chaos and the start of the next worldwide depression? Personally, I am entirely convinced that the financial markets are more primed for a financial collapse now than they have been at any other time since the last crisis happened nearly seven years ago and I am certainly not alone. END_OF_DOCUMENT_TOKEN_TO_BE_REPLACED

10. Financial Entertainment On the Breakdown of the USA: “The Mayans R Us”!

The Mayans R us. One year, they were cavorting bloodthirstily atop their garish painted pyramids and a generation later the jungle was stealing back over the temple steps and the population was a tenth of its former size. The same thing is going to happen to us, except there will be a hell of a lot more worthless, toxic debris left on the landscape. We enter 2015 with greater tensions than ever before and therefore the likelihood is that the inevitable breakdown will release more destructive energy and be that much harder to recover from. END_OF_DOCUMENT_TOKEN_TO_BE_REPLACED