economic growth by lowering borrowing costs for businesses and consumers but the evidence shows that QE bond purchases have actually coincided with increases in long-term interest rates.

The above are edited excerpts by Scott Grannis, the Calafia Beach Pundit, (scottgrannis.blogspot.ca) from his original article* entitled Quantitative Easing Myths.

The following is presented by Lorimer Wilson, editor of www.FinancialArticleSummariesToday.com and www.munKNEE.com and the FREE Market Intelligence Report newsletter (sample here – register here). The excerpts may have been edited ([ ]), abridged (…) and/or reformatted (some sub-titles and bold/italics emphases) for the sake of clarity and brevity to ensure a fast and easy read. This paragraph must be included in any article re-posting to avoid copyright infringement.

The Fed is guilty of misleading the public; it should be arguing that its QE efforts have been successful because they have boosted long-term interest rates [as can be seen in the chart below]. Interest rates are up because the outlook for the economy has improved, and QE has likely contributed to that improvement by satisfying the world’s huge demand for safe assets.

The chart below shows the yield on 10-yr Treasuries (blue), overlaid by shaded areas representing periods of Quantitative Easing (darker green) and the one period of Operation Twist (light green). 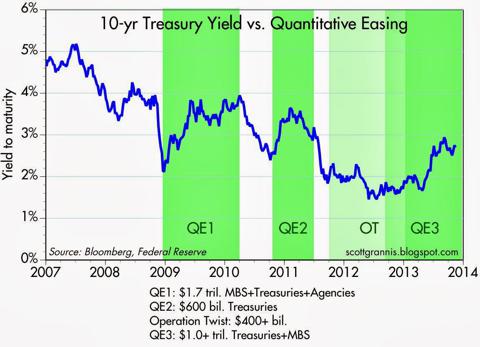 The chart below compares the yield on 10-yr Treasuries (red line) with the percent of marketable Treasuries held by the Fed as a result of its QE purchases (blue line). 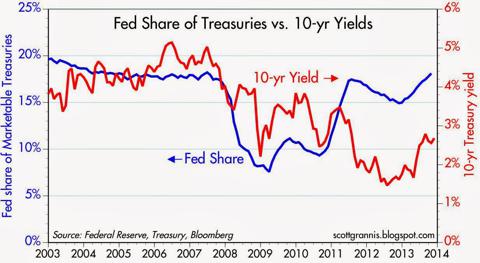 There is no evidence in either of the two charts above to support the notion that QE bond purchases have inflated bond prices or depressed bond yields.

The same arguments apply to the Fed’s purchases of mortgage-backed securities as the chart below shows. The Fed has dramatically increased its ownership of MBS over the past several years, yet there is no indication that increased purchases have had a depressing effect on mortgage yields. Over the past year, during which the Fed has purchased $40 billion of MBS per month, mortgage yields have actually increased by about 100 bps. 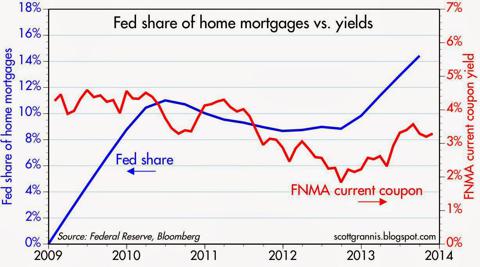 One explanation for why the Fed’s QE efforts have not produced their promised results is relatively simple.

It’s also a myth that the Fed has been “printing money” with abandon as a result of its QE bond purchases. This myth persists, despite strong evidence to the contrary (i.e., the fact that inflation remains very low despite four years of massive QE purchases), because the majority of observers fail to understand the mechanics of Quantitative Easing.

1. Noonan: The Fed Will Never Ever Taper & What That Means For Gold

The Ponzi bubble is bigger than most can imagine. Western central planners… [continue to try to] suppress gold and silver in order to keep their sorry lives alive. In the process, the destruction of people’s financial well- being is unabated… Read More »

2. What Will Happen If (and probably when) the U.S. Debt Bubble Bursts?

The madmen who are responsible for the coming economic disaster continue to behave as if they can manage to avoid it. Violating Einstein’s definition of insanity, they continue to apply the same poison that caused the problem. These fools believe they can manage complexities they do not understand. The end is certain, only its timing is unknown, and, once interest rates begin to rise, and they will, it’s game over so it begs the questions “How much longer this can possibly go on?” and “What will happen to the U.S. and the world when it does?” Read More »

Share
Previous Retiring Soon? Consider Relocating to One of These Cities or Countries (+2K Views)
Next Did You Miss Out On These 10-Bagger Stocks? (+2K Views)