GDX vs. HUI: Which is the Most Ideal Gold Stock Sector Benchmark? (+3K Views)

performance. Nearing its eighth birthday, GDX has even usurped the venerable HUI gold stock index as this sector’s metric of choice in many circles. Let me explain why that is the case.

The above are edited excerpts from an article* by Adam Hamilton (zealllc.com) entitled GDX Gold-Stock Benchmark.

The following article is presented by Lorimer Wilson, editor of www.munKNEE.com and the FREE Market Intelligence Report newsletter (sample here) and has been edited, abridged and/or reformatted (some sub-titles and bold/italics emphases) for the sake of clarity and brevity to ensure a fast and easy read. This paragraph must be included in any article re-posting to avoid copyright infringement.

Hamilton goes on to say in further edited excerpts:

“…While ETFs are common and ubiquitous today, GDX was revolutionary at its birth [back in 2006]. It gave individual and institutional investors and speculators an easy and efficient way to get instant diversified exposure to the world’s best gold mining stocks. The fund’s custodians did all the hard ongoing research work, aided by market capitalizations, which always separate the winners and losers. GDX proved a success [and] now, on those rare days when gold stocks are discussed on CNBC, the HUI is never mentioned. In this new ETF-dominated world, the dominant ETFs have replaced minor sector indexes as the leading benchmarks of choice so to mainstreamers not steeped in gold stock trading experience, GDX is the gold stock sector…

GDX tracks its own modified market-capitalization-weighted index, the NYSE Arca Gold Miners Index. Market cap weighting is without a doubt the best way to construct an index. Over time in free markets, companies are stratified by their market caps, which reflect their past successes, current execution, and future potential. The winners are bid up to higher market caps, while the losers are sold down to lower ones.

GDX currently has 39 component companies, the largest 7/8ths of which are listed in this table. Their market capitalizations and relative market-cap weights within this population are shown, along with each company’s weighting in GDX and the gold standard HUI. GDX is quite interesting, both similar to and different from the HUI. Its custodians have done a great job in creating a fine gold stock benchmark. 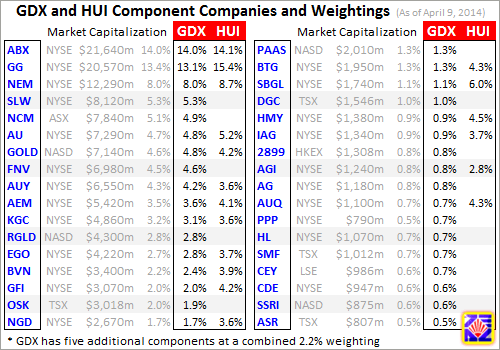 GDX’s best attribute after ease of trading and instant diversified gold stock exposure is the smart way that its components are weighted. GDX’s weightings are virtually identical to their relative market caps among each other. This avoids the common ETF pitfall of custodians subverting the results of free market bidding to impose their own biases on their portfolios. The best companies win the largest market caps.

This weighting methodology is better than the HUI’s. With only 18 component stocks compared to GDX’s 39, market cap weighting is a lot harder. So the HUI’s custodians essentially assign the top two companies a weighting near 15% each, the third around 10%, and then split the remaining 60% among the remaining components roughly equally. This gives the smaller companies an outsized index impact.

That would be fine if they were the best of the smaller gold miners, but unfortunately, they aren’t. Some of the highly-weighted smaller market cap components of the HUI have had big problems ranging from production issues to poor management to geopolitical challenges, and their performances have suffered. If a better subset of the smaller gold miners shown above was picked, the HUI’s performance would improve.

Another neat attribute of GDX is that it doesn’t just hold American-traded stocks like the HUI. GDX offers exposure to gold and silver miners that trade in Australia, Canada, Hong Kong, and the UK. This overseas contingent isn’t huge, at 11 of the 39 component stocks, but less than 1/8th of all GDX stocks’ total market capitalization. But it’s still a nice bonus to get international exposure unavailable in US markets.

As all experienced gold stock traders know, the American stock markets are no longer the venue of choice for emerging and growing explorers and miners. Unfortunately, crushing regulations here in the U.S. have made the cost of doing business far too high for smaller companies, so many choose to list elsewhere instead. Canada is now the dominant world leader, so it’s important to be able to trade on its exchanges.

GDX certainly has drawbacks too:

An ideal portfolio is a single company, the one that is going to have the best performance over your holding period but since we mere mortals can’t see the future, we can’t know which one stock is going to fly far beyond the rest so we diversify, spreading our bets to have a greater chance of catching that one with the best gains. This also reduces company-specific risk, which is very serious in gold mining.

Unfortunately gold deposits and mines are inexorably locked in specific places, so miners are at the mercy of their host governments. Unlike most producers that can move factories to other countries if one country burdens them too much or hikes tax rates too high, gold miners don’t have that option. Owning 10 to 20 elite gold and silver miners reduces the overall impact if one falls sharply on some geopolitical problem…

The GDX and HUI both share another serious problem endemic to the small gold mining sector – an overemphasis on the major miners. This week, GDX’s 39 component companies had a total market cap of just $154b. This is vanishingly small in the context of the broader stock markets. At the end of March 21, companies in the S&P 500 had individual market caps greater than the total of all of GDX’s components.

One of the reasons gold stocks can soar so fast when they start to regain favor is the tiny size of this sector. They are less than 0.9% the size of the S&P 500 but, within these GDX components, the top 5 alone account for a whopping 46% of all components’ total market cap so, just like the HUI, GDX’s price action is dominated by a handful of major gold and silver miners with stock prices that have stagnated so a bet on both GDX and the HUI is largely a bet on the major gold miners...

How does the GDX  hold up compared to the gold standard HUI as a benchmark? This next chart compares the two over the last 7+ years. Despite their considerable differences, their performance is functionally identical. These two lines are totally interchangeable; no one could tell the difference. Why? Because both the ETF and the index are utterly dominated by the performances of the same major miners. 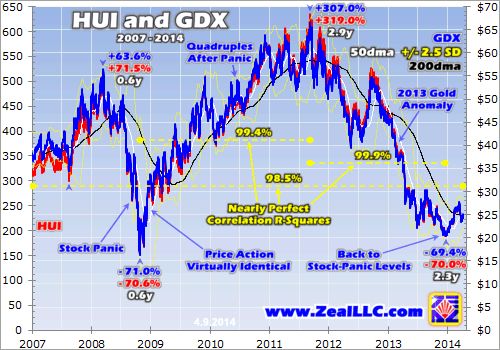 GDX’s international exposure, its over-diversified portfolio size, and its management fee would seem to be enough to differentiate its performance from the venerable HUI’s but there is virtually no difference. During gold’s major uplegs and corrections of the past 7 years or so, GDX’s price action and performance has been virtually indistinguishable from the HUI’s. So for all intents and purposes, GDX is the HUI.

This is not only true visually, but mathematically. Over the entire span of this chart since the dawn of 2007, the GDX and HUI have had a stellar correlation r-square of 98.5%. This is astoundingly high for an r-square, just off the charts. It means 98.5% of the daily price action in GDX is statistically explainable by the HUI’s, or vice versa and, within the last great upleg and correction, this relationship was even stronger.

When gold stocks more than quadrupled out of late 2008’s exceedingly irrational and fundamentally absurd stock-panic low, the GDX and HUI r-square climbed to 99.4% and, in the subsequent correction that cascaded into a brutal cyclical bear in last year’s extreme gold selling anomaly, this number shot up to an unheard of 99.9%. This almost bothers me, as GDX’s major differences should lead to different performance but they haven’t, because the major gold and silver miners dominate both the ETF and the index…

GDX’s excellent tracking of gold stock performance will also make it the destination of choice for mainstream capital looking for gold stock exposure. This is a double-edged sword. On the good front, traders putting differential buying pressure on GDX threaten to sever its tracking of its underlying gold stock index so those capital flows must be directly equalized into the underlying gold stocks themselves. Thus GDX’s custodians absorb excess demand by issuing new shares. The resulting cash they raise is then shunted back into the gold stocks, lifting the entire sector. The bad part of this, though, is that GDX will deploy new capital based on its weightings, determined by its components’ market caps so all these gold stocks will get a boost from GDX buying instead of the half-or-so subset that are most deserving of capital inflows.

If all gold-stock investment happened through GDX alone, the performance of the gold stocks would be totally homogenized. Thankfully that is not the case, with the vast majority of gold stock buying done outside of GDX. How can we know that? GDX’s market cap is only around $8.1b, just 5% of the total market cap of its component gold stocks, so experienced stock pickers will still shine in the gold stock realm.

The bottom line is the GDX gold stock ETF has grown into a fine sector benchmark. It has far more, and many better, companies than the flagship HUI gold stock index. Despite its reasonable annual management fee, its performance has nearly exactly mirrored the HUI’s. Investors and speculators who just want basic, diversified gold stock exposure are well-served by GDX, because it tracks gold stocks perfectly…”

Remember: If you like what you read above please sign up to receive our 2-3 times a week “Market Intelligence Report” containing introductions to every new article/video that has just been posted on the site. If you are not inclined to subscribe to newsletters then please “Follow the munKNEE” via Facebook or twitter for direct access to every new article and/or video posted.

1. Don’t Be Misled – There are Major Differences Between the HUI, XAU & GDX

The number, market cap and currencies of the constituents of the HUI, XAU, GDX, XGD and CDNX indices differ considerably from each other and, as such, each index presents a different picture of what is really happening in the precious metals marketplace. This article analyzes the make-up of each index to reveal the biases of each to arrive at the answer to the question in the title. Words: 1026 END_OF_DOCUMENT_TOKEN_TO_BE_REPLACED

Extent of Management ‘Skin in the Game’ & ‘Smart Money’ Involvement In Junior Miners Is CRUCIAL! Here’s Why (+3K Views)