Lorimer Wilson May 26, 2013 Comments Off on France is Eurozone’s Biggest Risk to Economic Recovery – Here’s Why 2,894 Views

recovery. Why France some may ask? [Here’s why.]

The original article* from http://soberlook.com entitled The gap between France’s “hard” and “soft” economic indicators poses risks goes on to say in further edited excerpts:

It was Italy and Spain who presented the biggest challenge to the union’s stability in 2011 and 2012 [yet, while] the situation in those two nations is dire indeed,…the so-called “hard” economic measures in…[those countries] have generally “caught up” with the “soft” indicators (surveys).

The Italian GDP growth is now roughly in sync with the service PMI measure (below).

Spain’s hard indicators may have even “overshot” the “soft” ones to the downside. Spain’s and Italy’s recession is effectively “priced in” – i.e. reflected in the hard measures such as the GDP or the industrial production. Furthermore, there are signs of the periphery nations’ contraction bottoming out (see discussion).

France, however,…still shows a relatively small GDP contraction, while survey indicators look horrible (chart below)…[The limited gap suggests that there is]…a risk that France is yet to undergo its deep “official” recession, which would hold back the Eurozone as a whole. [In addition,]…France’s “soft” measures of output continue to lag the rest of the Eurozone (see discussion). 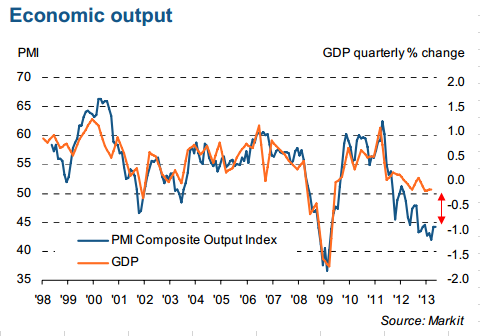 What’s particularly troubling is that France’s “soft” economic indicators show a broad deterioration – in both business as well as consumer sentiment. 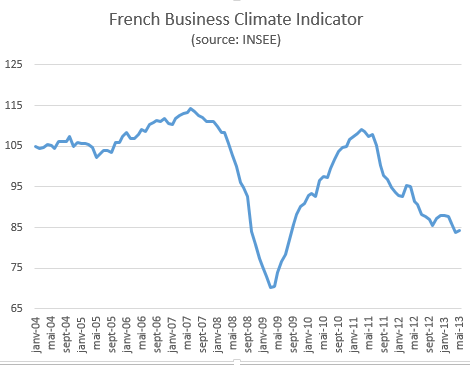 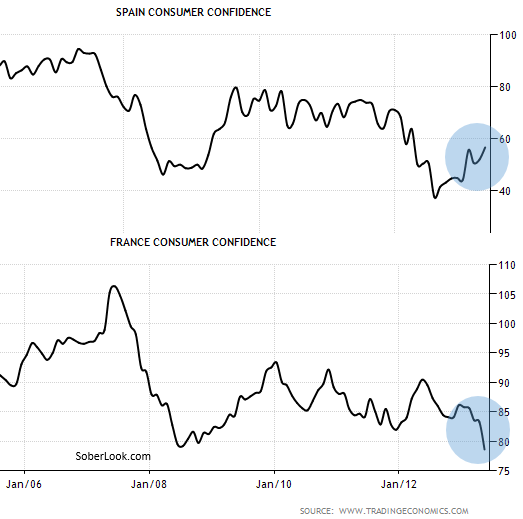 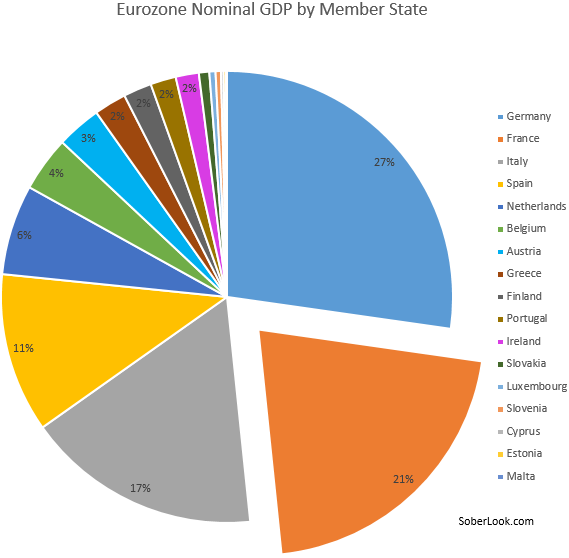 Given that France is over a fifth of the area’s GDP output (see chart above), there is a clear risk that if the nation’s “hard” indicators catch up with the “soft” ones, the Eurozone’s recovery may take considerably longer.