Although one often hear assertions about how federal spending or federal taxes have been climbing out of control for years or decades, the actual spending and taxing totals for the federal government have been remarkably stable for a half-century according to the latest Congressional Budget Office of the “The Budget and Economic Outlook: 2022 to 2032” (May 2022).

This version of the original article by Timothy Taylor (conversableeconomist.com) has been edited [ ] and abridged (…) to provide you with a faster and easier read. Also note that this complete paragraph must be included in any re-posting to avoid copyright infringement. 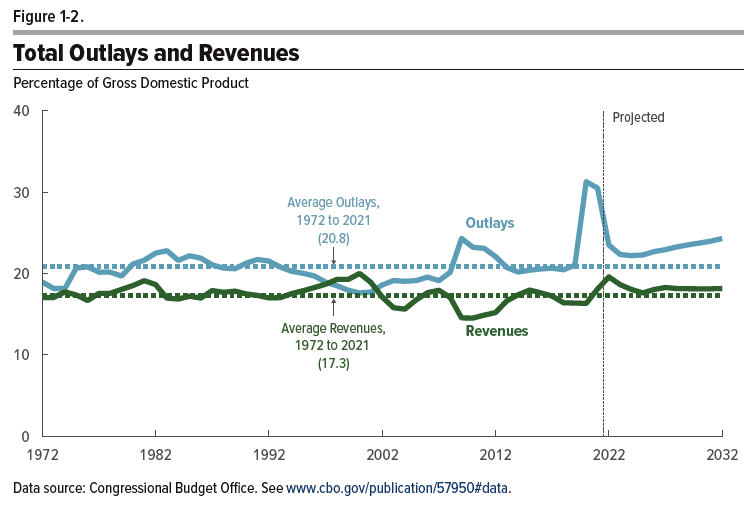 Yes, spending spiked during the pandemic and to a lesser extend during the Great Recession of 2008-2010, and there have been other times, like the dot-com boom of the 1990s when spending was well below its average and taxes were well above but it is remarkable to me that the projections for the next year or so have total federal spending and taxes very much in line with what they have been for a half-century.

Although the totals for federal spending haven’t changed much, however, the main areas of spending have shifted substantially–and are projected to keep shifting.

As I have noted before, the nature of the federal government is shifting in front of our eyes. It’s more and more about cutting checks for older people and health care providers, and less and less about defense or about building social infrastructure of various kinds.

After five decades of more-or-less stability, however, the pressures are building on U.S. government deficits and debt. The figure below shows the standard measure of federal debt held by the public. (The reason for “held by the public” is so that it doesn’t count situations like the trust fund for Social Security, where the federal government holds its own debt–and thus where one part of the government has borrowed from the rest.) 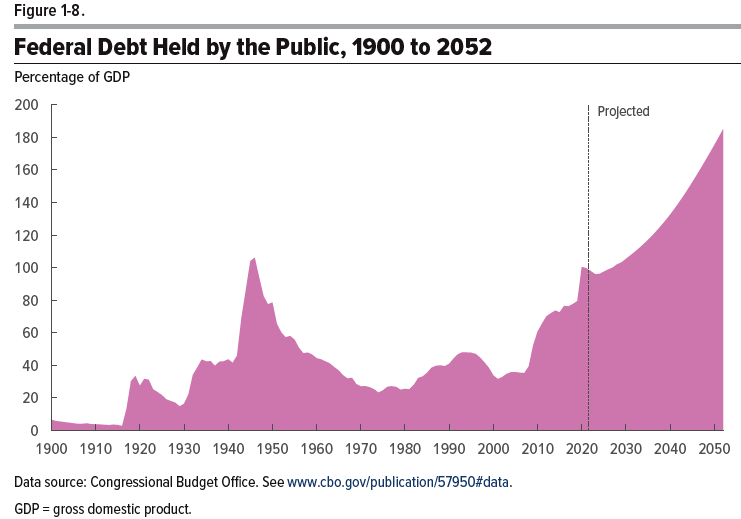 As you can see, the rise in the debt/GDP ratio from 2009 up to the present is similar to the rise that happened when the costs of World War II were paid for with borrowed money, however, federal debt/GDP dropped sharply after World War II, and kept falling for decades.

At present, the already high debt/GDP ratio is projected to stay roughly the same for a decade or so, and then to climb higher, due largely to the projections for higher health care and Social Security spending, combined with the way in which this higher spending would drive up federal interest payments.

There are options here.

Share
Previous The REAL Reasons Behind the Current U.S. Inflation Problem
Next Continued M2 Contraction Could Devastate the Markets