Greed is a powerful motivator, but in the extreme it is cause for fear. Below we provide 10 reasons to be fearful…

1. The Stock Market Is In A Bubble

No one knows for sure when we are in a bubble until it bursts, but there have been reliable indicators that forecast bursting bubbles. The issue is what price is too high. The Buffett Bubble Barometer shown below has been a reliable predictor. 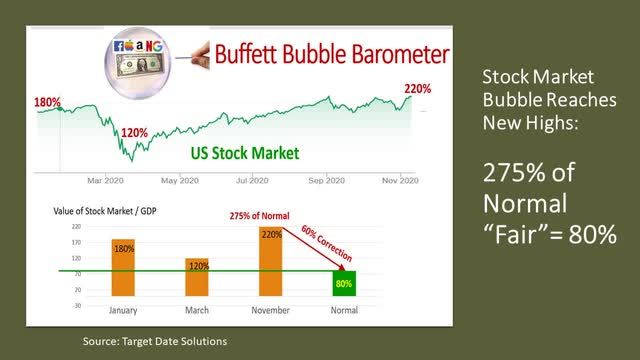 The Buffett Indicator is the ratio of the value of the stock market to Gross Domestic Product (GDP). This ratio is about 80% in non-bubble times and has never been as high as it is currently, at 275% of “normal.” In other words, an overpricing of almost 3X. It will take a 60% correction to restore the indicator to normalcy…

Detractors argue that “It’s different this time” because interest rates have never been so low. More on this in the ZIRP (Zero Interest Rate Policy) discussion below.

2. COVID-19 Is Getting Worse, Not Better

…We’ve had a flare-up that is setting the economy back on its ear, especially industries like theaters and restaurants…

The vaccines…will save a lot of lives and bring the economy back toward normalcy, but economists see recovery taking years, not months.

The world is…bankrupt but countries can print money, and they are. The problem is, [however,] that paper money is just paper; that’s why it’s called “fiat currency.” The worth of fiat currency relies on our willingness to provide goods and services in exchange for pieces of paper. The U.S. dollar enjoys a special status because it is the world’s trade currency, but that does not exempt it from devaluation. 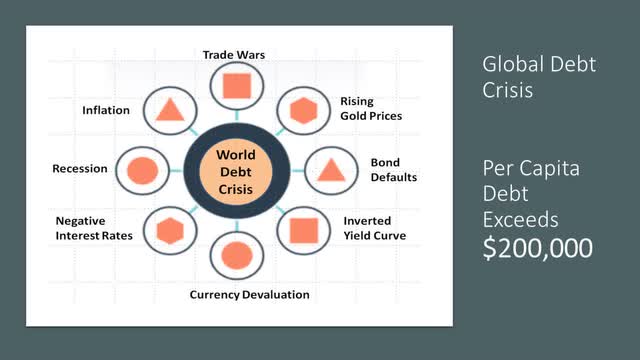 Per capita world debt has surged above $200,000 and is the source of the problems shown in the graph above. The outcome is likely to be painful, although it could take a long time to reach its ultimate conclusion. Politicians hope it will just go away. Addressing the problem can be political suicide. American theologian James Freeman Clarke said “A politician thinks of the next election. A statesman, of the next generation.” That’s why there’s little push-back against continued large deficits around the world.

Anyone who borrows money would love to borrow interest-free, but that’s a special gift reserved for central banks who can, and , [do] manipulate bond markets to ridiculously low levels of interest. Some are even getting lenders to pay them by bringing interest rates below zero… 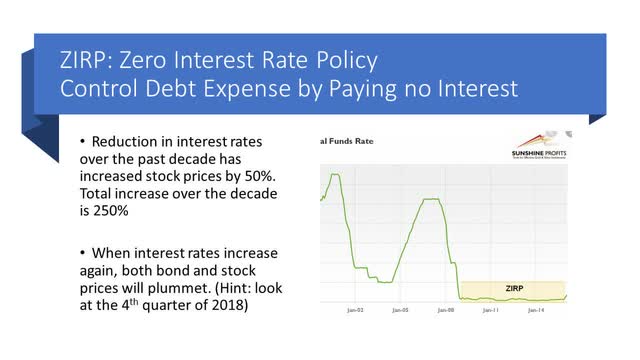 Some say that low demand for loans has driven down interest rates, but that misses the needs of lenders. Lenders should demand interest payments that exceed inflation to compensate them for letting someone use their money, but that is not happening because central banks are not allowing it to happen…

5. The Economy Is In A Shambles

Economies around the world are suffering from the effects of COVID-19. Recoveries are occurring but are incomplete. Unemployment in the U.S., at 7%, is well above the 4% average, plus many have withdrawn from the workforce, bringing down workforce participation. 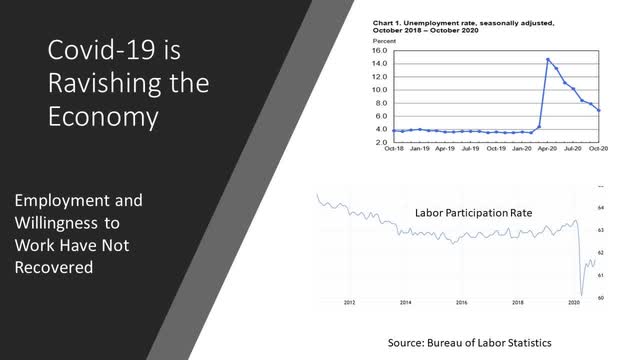 Most economists believe it will take years to fully recover from the pandemic.

Quantitative Easing (QE) has made the rich richer by paying them handsomely for their bonds, which they in turn invested in the stock market. This caused security price inflation, a form of inflation that is not captured by the Consumer Price Index (CPI). Much of the wealth of the wealthy is held in stocks and bonds. 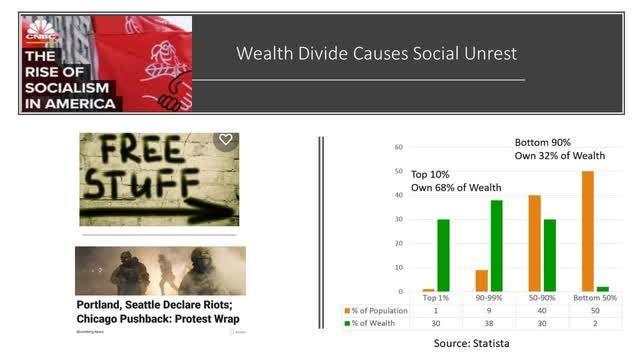 Even though the U.S. remains one of the richest countries on earth, the not-so-rich understandably want more of the wealth of this country. They are not getting what they think is a fair share. The top 10% own 68% of the wealth…

…The results of a dirty bomb would be catastrophic to the world and the capital markets. This is a threat that we think is small, but the consequences are huge. 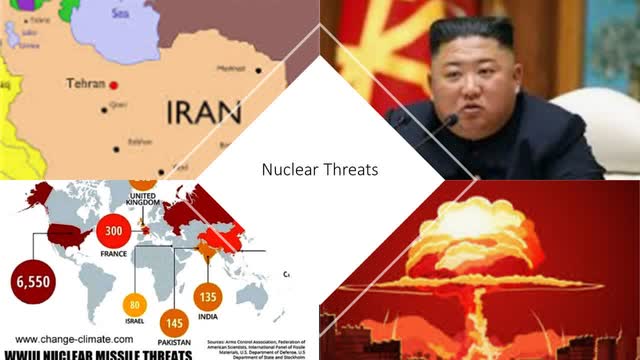 8. Social Security and Medicare Will be Bankrupt Soon

70% of baby boomers – about 55 million people – rely heavily on Social Security, but tax receipts have been insufficient to pay benefits since 2018. The projected liability for Social Security is $29 trillion, which is $2 trillion greater than the official $27 trillion figure.

Even worse, 60 million people are insured by Medicare and that figure is expected to increase to 90 million by 2030. The estimated present value of future Medicare costs is $47 trillion. 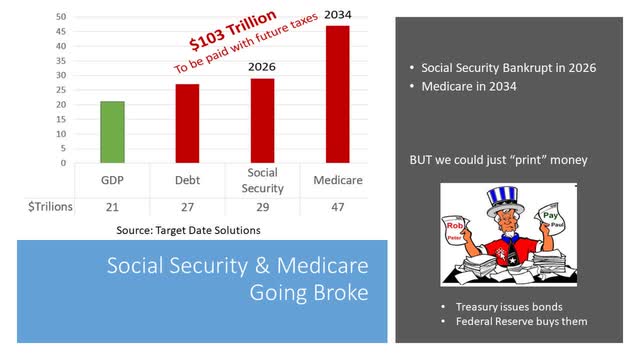 Some say Social Security and Medicare can’t go broke because we own the “printing press.” It’s helpful to understand how money is “printed.” The US Treasury issues bonds so it can spend…In good times, U.S. and foreign citizens have been happy to buy these bonds, but they are not paying interest now. Today most of the newly issued Treasury bonds are being purchased by the Federal Reserve. Money is “printed” by the Treasury issuing bonds that the Federal Reserve buys, which brings us to the next threat.

9. Serious Inflation Has Occurred and More Is On the Way

…Recent COVID relief of $3 trillion should increase consumer prices because that money is being used to buy groceries and pay rents/mortgages – and another $3 trillion, or more, is likely. This humanitarian relief is greatly needed, but it will not be free. There will be consequences. 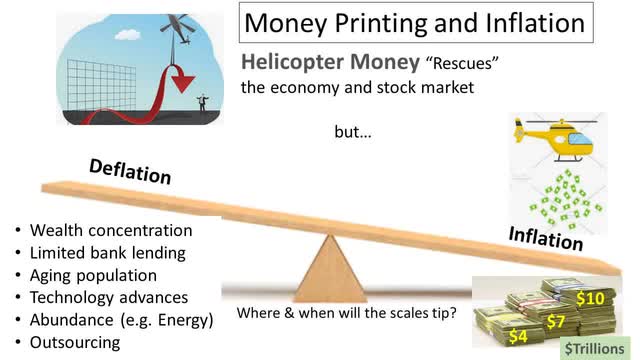 This influx of new money will eventually tip the inflation-deflation scale to inflation. A confluence of factors has brought us disinflation/deflation for a decade, as shown in the picture above, but they can’t permanently ward off the effects of too many dollars chasing too few goods.

10. Target Date Funds do not Protect Those Near Retirement

With $2.5 trillion in target date funds (TDFs), many beneficiaries trust that their lifetime savings are protected, but they’re mistaken. As shown below, the typical target date fund is 78% in risky assets at the target date, where we define “risky” as equities and long-term bonds. There are a few “SMART” TDFs that are safe, but they do not have much invested in them… 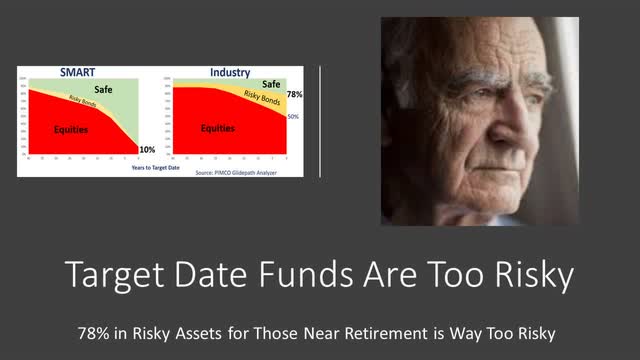 In 2008, TDFs for those retiring near 2010 lost 35% and beneficiaries were shocked. This catastrophe prompted the first and only joint hearings of the SEC and DOL in June 2009. Regrettably, these hearings changed nothing of consequence. There was $200 billion invested in TDFs in 2008. Today there are more than 10 times that $200 billion in TDFs, and many more people. The next market crash will devastate those near retirement who are invested in TDFs…

…We were taught that the stock market is always “right” because it captures the collective wisdom of all investors yet it’s undeniable that there have been bubbles that, after the fact, show that prices were too high. I am not a perma-bear as some readers have suggested. I’m concerned and perplexed by the disconnects between the economy and the stock market, and truly wish it were as simple as “the market is always right.”

Editor’s Note: The above excerpts from the original article* have been edited ([ ]) and abridged (…) for the sake of clarity and brevity. Also note that this complete paragraph must be included in any re-posting to avoid copyright infringement.