economies (Australia is 2nd best, Germany 3rd and the U.S 4th) while the U.K. and Japan are 9th and 10th but when such debt is broken down by sectors the findings are quite different. Let’s take a look. Words: 800

So says Edward Harrison (www.creditwritedowns.com) in paraphrased excerpts from his original article*.

The chart below via the Wall Street Journal. It shows the total debt to GDP ratios for the largest developed economies in the world broken down into four sectors: households, non-financial corporations, financial institutions and government. 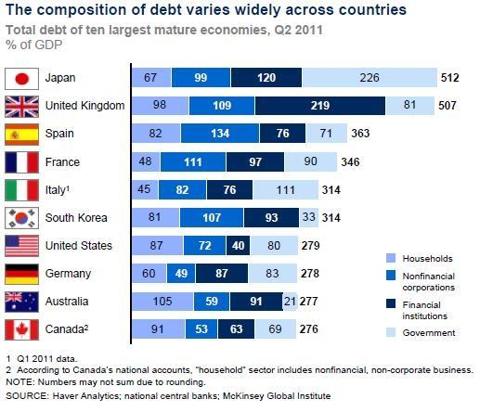 Remember that a government deficit that creates debt is always mirrored by a nongovernment surplus so these aggregate numbers don’t tell the full story since you would need serious private sector credit growth to offset government deficits. Another point to remember is that the UK banks in particular have a lot of foreign currency assets that create concomitant liabilities….

Why spend time surfing the internet looking for informative and well-written articles on the health of the economies of the U.S., Canada and Europe; the development and implications of the world’s financial crisis and the various investment opportunities that present themselves related to commodities (gold and silver in particular) and the stock market when we do it for you. We assess hundreds of articles every day, identify the best and then post edited excerpts of them.

1. Batten Down the Hatches: A Hurricane of Debt, Deficit and Demographics is Coming!

A hurricane of debt, deficit, and demographics is heading to the shores of all developed economies. With it will come high inflation rates, high costs for credit, low growth rates, and weakening developed country currency value. Ben Bernanke in a helicopter will not stop the hurricane’s devastating path. More stimulus packages will not stop it. Blaming the Chinese for lending us too much money will not stop it. Pretending that the storm isn’t coming will most assuredly not stop it. It threatens to derail the lukewarm economic recovery and to alter forever the heretofore path of robust growth for the developed world. In a sense, debt, deficit, and demographics will reset the world to a “New Normal”. Words: 3341

2. U.S Predicament is “Too Much Debt”: Solution is “More Debt”! Here’s Why

The economy can’t be fixed…the old regime of general economic stability and rising standards of living fueled by excessive credit are a thing of the past… The sooner we can accept that idea and make other plans the better… [Let me explain.] Words: 1898

3. Invest in Canada and Generate Emerging Market Returns – Without the Risks

In this hostile financial climate, long-term investors must now give more thought than ever to capital preservation and sustainable growth… and Canada’s fortunes will surprise many. Its uniquely bifurcated economy can serve as a bridge from the developed to the developing world – at least for investors wise enough to cross it. Words: 776

4. Why Unsustainable Debt-to-GDP Ratios Will Result in (Hyper)inflation

Central banking makes it possible for the government to expand the money supply by any amount, at any time deemed necessary and once (hyper)inflation is publicly seen as being the lesser evil of all options available for the government meeting its debt service, it cannot be dismissed out of hand that (hyper)inflation would be the consequence of an unsustainable debt-to-GDP ratio. Words: 982

Share
Previous When Should You Sell Your Gold?
Next Buy Gold NOW Ahead of Further QE – Here's Why