This article answers the question as to how far the employment situation in the U.S.

is from “normalizing” by analyzing 6 metrics to help answer the question. The conclusion is surprising. Read on.

The above introductory comments are edited excerpts from an article* from SoberLook.com entitled How close are the US labor markets to normalization?.

The article goes on to say in further edited excerpts:
How far the employment situation is from “normalizing” all depends on the metrics used. To that end we analyze below a number of metrics to help us answer the question, namely:

1. The chart below, for example, shows that the headline unemployment rate is now well within the normal range (based on long-term historical data) but, as we know, that’s only part of the story.

2. A broader gauge of unemployment, the so-called U-6 rate, which includes marginally attached workers and those employed part time for economic reasons, suggests the labor markets have some room for improvement. 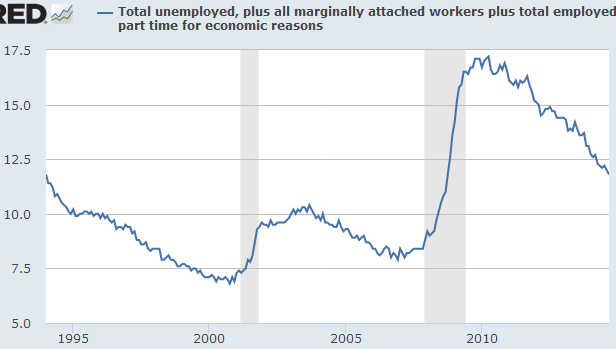 3. Within the U-6 metric it is particularly important to track the percentage of those employed part time for economic reasons. The current number of these workers (at just over 4.5% of the labor force) is not unusual by historical standards but is still quite elevated. It’s not at all clear however if we are ever returning to the lows of the decade that preceded the Great Recession. 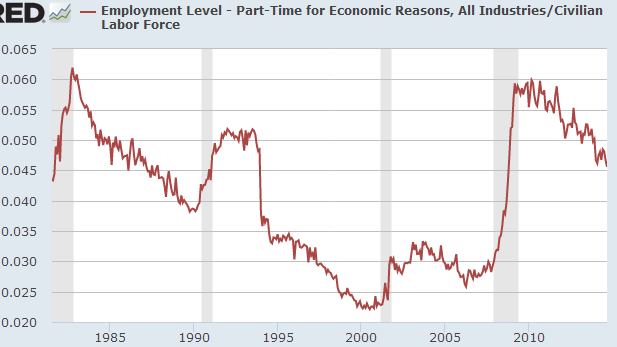 4. Another measure of labor markets’ health is an estimate of the “job finding rate” from Credit Suisse. At least based on the data since 1990 (which may not be a sufficiently long range), that metric is currently far below average. We do see signs of significant improvements recently but the red line in the chart below may no longer be our target for what is “normal”.

5. We’ve also seen a great deal of focus on falling U.S. labor force participation rate. The non-demographic component of the post-08 declines in participation rate is of particular importance. How much is due to aging U.S. population vs. the discouraged workers exiting the labor force?

There are hints that the non-demographic decline in participation has been halted, albeit at a relatively low level. The fact that the non-demographic participation level has fallen doesn’t say much about what it will take to return to “normal”. That’s because the pre-recession housing bubble had generated unsustainable demand for labor (particularly unskilled labor). That demand isn’t coming back any time soon as we look to establish the “new normal” in participation rate. We also see other factors impacting participation such as more disability claims and higher college enrollment rates.

6. Finally we want to take a look at wage growth as an indicator of demand for labor. Wage growth in the U.S. remains remarkably steady, anchored at 2% per year. While this growth is certainly weak relative to recent history, it is quite respectable relative to other developed economies.

How far is wage growth away from “normal”? Most economists believe that if payrolls continue to increase at the current pace, wage growth will improve. Perhaps, but we are unlikely to see sustained wage growth at levels the U.S. experienced prior to the recession. Given weaker wage inflation globally (and wage deflation in a number of EU states), the 2% or slightly higher may be the new “normal”. 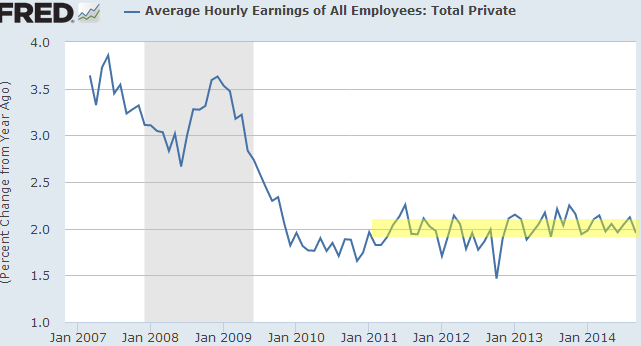 Conclusion
While many continue to insist that we are years away from normal labor markets in the U.S., it may be time to adjust our expectations. We could be much closer to the “new normal” than we had hoped.

1. The Miserable State(s) of America & the World
The Misery Index is a lens through which to look at quality of life and, from an American perspective, such misery has risen steadily since 1994. How miserable is your state (and your state of being)? Take a look.. END_OF_DOCUMENT_TOKEN_TO_BE_REPLACED
END_OF_DOCUMENT_TOKEN_TO_BE_REPLACED Black Male Unemployment Situation In U.S. Is Dire! Here’s Why
In early October, the Center for Law and Social Policy (CLASP) released a report entitled “Feel the Heat!” that details the economic status of black men in the United States. Author Linda Harris discusses this group’s high unemployment rates, which she attributes to high incarceration rates, low graduation rates, and a lack of support systems to help black men out of this low-income trap. END_OF_DOCUMENT_TOKEN_TO_BE_REPLACED