Consequences Of Argentina’s Debt Default Will Be Grim (+2K Views)

possibilities if Argentina does not reach a settlement with the holdouts in the near future. Below are more insights into Argentina’s latest debt default.
The above introduction is to an article* from SoberOutlook.com entitled Argentina default Q&A.

The following article is presented courtesy of Lorimer Wilson, editor of www.munKNEE.com (Your Key to Making Money!),  and has been edited, abridged and/or reformatted (some sub-titles and bold/italics emphases) for the sake of clarity and brevity to ensure a fast and easy read. This paragraph must be included in any article re-posting to avoid copyright infringement.

The article is as follows:
We’ve had a number of questions on Argentina’s latest default. Here is an overview of the situation in a Q&A format.
Q:  Is Argentina officially in default?
A:  While Argentina’s government deposited the dollars for distribution to Discount bond holders, the interest was not distributed as scheduled last week. Missed coupon payment represents default, at least as far as S&P is concerned (classified as “selective default”).
Q:  Does Argentina recognize that it is in default?
A:  No. The Economy Minister Kicillof made it clear that as far as Argentina’s government is concerned there is no default because it has, and will continue to make, deposits with BNY Mellon (the trustee) to pay the coupon. The government blames the missed coupon payment on Judge Thomas Griesa’s ruling. That ruling held back payments to the bondholders who had accepted the renegotiation of Argentina’s debt in 2005 and 2010.
Q:  Why haven’t the funds been distributed?
A:  Funds would have been released if Argentina settled with the “holdouts” (those who didn’t agree to the 2005/2010 settlement). The holdouts sued for $1.6bn and the negotiations with the government failed to produce a settlement before the deadline last week, preventing the cash from reaching the bondholdrs.
Q:  Has the sovereign CDS (credit default swap) been “triggered” (have we had an “event of default”)?
A:  It is likely that we do indeed have an event of default under the ISDA guidelines. The event would fall under the category of “Failure to Pay”. Having deposited funds with the trustee does not prevent default under ISDA because Argentina has an obligation to make sure coupon payments reach the bondholders. And by choosing not to settle with the holdouts on time, the nation failed to deliver such payments. Ultimately it will be the ISDA Determination Committee that will make that call.
Q:  Can a settlement still be reached?
A:  Yes. The government is highly incentivised to reach an agreement in order to be able to access international debt markets. However prospects of a near-term solution are uncertain and the legal ramifications of a settlement are unclear. A number of analysts are suggesting that a settlement will not take place until at least early 2015.
Q:  Would an eventual settlement have an impact on the CDS?
A:  No. The coupon payment has been missed and that should be enough for the event of default trigger. However depending on the timing of the settlement, it could impact the recovery value on the CDS (by impacting the bond prices prior to the CDS settlement).Q:  Why hasn’t Argentina’s government settled with the holdouts?
A:  There are a number of reasons, the most important of which is the government’s unwillingness to look politically weak by paying $1.6bn to some US hedge funds – far more than it paid other bondholders. Furthermore, it is Argentina’s current law that it can’t pay more to the holdouts than to the rest of the holders. Of course the law can be changed, but the government is unwilling to do so at this point.

Q:  What is the RUFO clause and what are its implications?
A:  RUFO stands for Rights Upon Future Offer, a clause written into the renegotiated bonds during the restructuring some years ago. It says that if Argentina’s government voluntarily offers better terms to the holdouts it would need to match those terms for all the bondholders. This sounds like another reason for Argentina not to settle, but it’s just an excuse. That’s because the “voluntary” term in the clause would keep RUFO from being triggered – since the settlement with the holdouts is not voluntary but mandated by the US court.

Q:  What are the economic consequences of Argentina not settling this by year-end or beyond?
A:   The consequences could be quite grim. As it is, the Argentina’s GDP is contracting again. 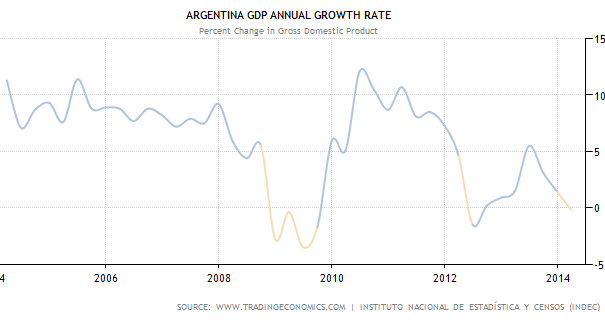 …and the nation’s current account is deep in the negative territory. 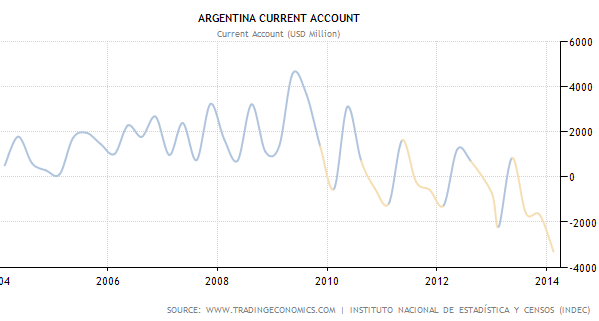 This is why Argentina should have every incentive to settle with the holdouts as soon as possible. Sadly, the risk that it won’t remains quite high.

The U.S. Dollar Is Dying and We Have Nobody To Blame But Ourselves!