It’s rare to come across a year of 40% losses in any major asset class but,

with the U.S. dollar likely at or near its peak and a number of other reasons to view commodities as a great bargain.

A. Introduction: The Perfect Storm

Since last July, here is a look at the relative performance of the three major U.S. asset classes (stocks, bonds, and commodities): 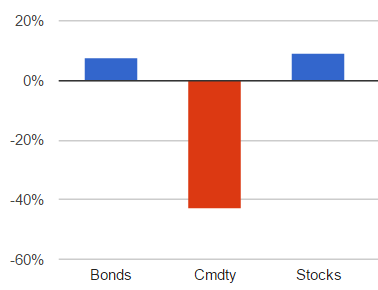 We’ve had a combination of a relatively strong economy, low inflation, and plummeting global prices for raw materials. Put simply, this situation is not particularly normal. In fact, it has only occurred a handful of times over the past 30 years, almost all of which involved a major geopolitical event, such as the beginning and subsequent end of an oil embargo. Today, we are witnessing a similar economic situation despite the absence of any such event, and there are many reasons to believe it cannot last.

Most importantly, the U.S. dollar has been surging in an unsustainable fashion, taking the price of all commodities down with it. This has been tied very closely to expectations of the Fed rising interest rates while the rest of the world continues monetary stimulus. However, since a stronger dollar has a negative effect on the rest of the economy, you quickly run into a catch-22.

The Fed can only raise rates if our economy remains strong, yet the economy will struggle to remain strong with the U.S. dollar at current levels. This basically creates a cap for how much stronger the dollar can get before the economy shows cracks or the Fed backs off. In both cases, the dollar will be forced to reverse its course – buoying commodities along the way.

“Follow the munKNEE” via Twitter and/or Facebook and have your say. Shock us, surprise us, inform us, entertain us. Here’s your opportunity to start a dialogue. Also one of the most comprehensive resources of the very best-of-the-best financial, economic, investment and gold/silver related Twitter & Facebook pages out there. Mark them as your favorites and get access to every article as posted.

B. Perspective on the Current Environment

While most of the headlines have been dominated by the plunge in the price of oil, recent trends are not limited to the energy market.

These trends can be more easily understood by examining the relative price of the U.S. Dollar over this same time frame. Keep in mind that since commodities are dollar-based, a stronger dollar will result in cheaper commodity prices.

The U.S. Dollar Index has increased from 76 to 95 since July 2014, or a whopping 28% rise. This factor alone explains almost half of the movement of the energy market (which is down 60% total), and basically all of it in the other major commodity markets (which are down between 15% and 30%). While supply and demand and global economic weakness have certainly played some role here, the movement of the dollar has been at least equally important.

Also note that the dollar is now far stronger than it was even in the depths of the 2009 recession, when the world was flocking into U.S. Treasuries for safety. Even stranger is the lack of any recent major geopolitical event, which has historically been an absolute requirement for this kind of dramatic currency movement.

In fact, if we look at commodity prices since 1980, there have only been three other periods that witnessed a simultaneous decline in the price of oil, gold, and copper on the heels of a massive dollar rally.

The aftermath of the Asian financial crisis probably provides the closest proxy for today – and examining it more closely reveals why our current situation is vastly different.

Relating the Dollar Strength of the Late 1990s to Today

In brief, the Asian financial crisis was the result of a ‘bubble’ popping in Southeast Asia, leading to the devaluation of many of those countries’ currencies and resulting in significant economic repercussions around the world. This global economic weakness deeply impacted the price of raw materials like oil and copper, while raising the value of more stable, developed currencies like the dollar.

Despite the global crisis, the U.S. escaped relatively unscathed. While there was a ‘mini-crash’ in the stock market in October 1997, markets wound up positive for the year. In short, the U.S. was independently strong enough and isolated enough to weather the storm.

Today, there are a few similarities in that commodity prices are crashing due to weakness in the global economy, and that thus far, the U.S. seems to be relatively unaffected by the struggles in the EU and Asia. Yet far more differences abound.

First, the Asian economies impacted in the 1997 crisis were not even remotely close to representing a large part of the global economy. For example, Thailand’s GDP was not even ranked in the top 100 at the time. Let’s compare this to GDP size in countries experiencing economic weakness today. 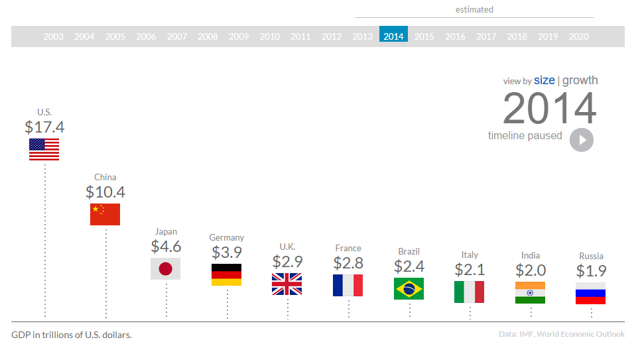 Which of these countries is currently contributing to global weakness? China? Check. Japan? Check. Germany? Check. The list goes on.

Second, the U.S. was in a period of robust growth driven by the beginning of the dot-com revolution at the time. For the year ending 1997, U.S. GDP growth was over 6%. As of last quarter, U.S. GDP growth is currently around 3%.

If the rest of the developed world is in trouble in our fully global and still fragile economy, you can bet the U.S. is going to be in trouble, too. It just isn’t realistic to expect that the U.S. can again be an independent and unaffected engine of growth.

C. Looking Forward, All Signs Point to a Weaker Dollar

With these facts in mind, there’s really only two realistic scenarios.

Both cases lead to a weaker dollar.

In the first scenario, the current stimulus efforts across the EU and Asia prove effective in keeping the global economy on a reasonable path. As those economies strengthen, so too will their currencies. The Fed will be relatively justified in its current path of raising interest rates, but it won’t be as if the U.S. is the only country on the planet in good shape.

In the second scenario, continued global weakness will inevitably take its toll on U.S. GDP. With the strong dollar already hurting our growth prospects, the Fed will be hard pressed to take anything but a dovish stance. With the strength of our economy in greater doubt, and interest rate expectations held further in check, the dollar will cool off as well.

So far as commodities are related, you could see a rally in either scenario simply as a function of the U.S. dollar. If the global economy appears on a better path, then that will even further push up prices as higher demand expectations return. If not, any additional weakness in demand will likely be offset by changes in the dollar, creating a situation with little further downside.

D. Wait, But What If the Dollar Rally Continues?

A continued dollar rally would be contingent upon further weakness in other global economies while U.S. GDP strengthens and interest rates rise. Absent some major shift in consumer spending or a new U.S.-led technological revolution, it is extremely difficult to envision this reality. Our economy would have to endure higher interest rates, a strong dollar, and weaker global demand all at once.

It is more likely that investors have piled into U.S. assets with the Fed guiding upward after so many years, but the combination of a stronger dollar and global weakness should quickly ease aggressive expectations for U.S. growth and higher interest rates.

E. Okay, So What’s the Play in My Portfolio?

Commodities as an asset class look like a great bet for 2016, especially with so many dangers lurking in both the stock and bond markets, and an allocation of 20-35% as part of a broader portfolio may be sensible.

Stay diversified in order to avoid issues with individual supply and demand curves,

[The original post by Hedgewise.com via SeekingAlpha.com is presented here by the editorial team of munKNEE.com (Your Key to Making Money!) and the FREE Market Intelligence Report newsletter (see sample here – sign up in the top right corner) in a slightly edited ([ ]) and/or abridged (…) format to provide a fast and easy read.]

For more than a year now, commodity prices have been under pressure from the strong U.S. dollar and slowing global demand. This has made a huge dent in the balance sheet of many net exporters of resources, in turn weakening their currencies. What most people don’t realize, however, is just how closely some currencies track certain commodities. Below are five world currencies that have been impacted by lower commodity prices.