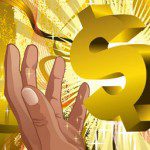 performance of gold and gold stocks but that was the identical situation in each of the past manias – both the metal and the equities didn’t excel until the frenzy kicked in. The following documentation (exact returns from specific companies during this era are identified) is actually a fresh reminder of why we think you should hold on to your positions – or start accumulating them, if you haven’t already. (Words: 1987; Tables: 7)

So writes Jeff Clark (www.caseyresearch.com) in edited excerpts from an article* entitled What ‘To The Moon’ Will Look Like.

Lorimer Wilson, editor of www.munKNEE.com (Your Key to Making Money!), may have further edited ([ ]), abridged (…) and/or reformatted (some sub-titles and bold/italics emphases) the article below for the sake of clarity and brevity to ensure a fast and easy read. The author’s views and conclusions are unaltered and no personal comments have been included to maintain the integrity of the original article. Please note that this paragraph must be included in any article re-posting to avoid copyright infringement.

Clark goes on to write, in part:

This may sound sensationalistic, but I think the odds are very high that, on average, gold producers will sell in the $200 range before this bull market is over. With most of them trading between $20 and $40, the returns could be tremendous and while the typical junior won’t reach the same price level, their percentage returns will be much greater and potentially life-changing, as you’re about to see.

Are my projections based on some fantastical gold price, or a complex formula for gold stock valuations? Nope. I base my projections simply on what gold stocks have done in the past, and to the surprise of many investors, it’s a performance they’ve logged several times, making the following prices very believable if you’re bullish on gold. It comes with a warning, though: Caution: the following tables may cause excitement, drooling, or the temptation to go all in. Read and invest at your own risk.

You’ve undoubtedly read about gold’s spectacular climb in 1979-’80 and you’ve likely heard how well gold stocks performed in general. Most researchers, however, haven’t identified exact returns from specific companies during this era. Why? Because digging up hard data prior to the mid 1980s, especially for the junior explorers, is difficult because it hasn’t been computerized. [To overcome that problem] we sent a couple of researchers, Scott Hunter of Haywood Securities and Larry Page, president of the Manex Resource Group, to the library to view the Wall Street Journal on microfiche and to review the dusty archives at the Northern Miner. (This means our tables, while accurate, are not necessarily comprehensive.)

Here’s a sampling of gold producers from this era. What you’ll notice in addition to the mouth-watering returns is that gold stocks did not peak until nine months after gold.

Notice that there was great variability among the returns of these companies. That’s why, even if you believe we’re destined for an “all-boats-rise” scenario, you still want to own the better companies.

With all due respect to Barrick management, there are gold stocks we’re convinced will far outperform the largest gold company in the world in the coming mania. below is a sampling of how junior gold stocks performed in the same period, along with the month each peaked.

If you bought a reasonably diversified portfolio of top-performing gold juniors prior to 1979, your initial investment would’ve grown 23 times in just two years. If you managed to grab 80% of that move, your account balance still would’ve grown 1,850%.

What the Above Could Mean to YOU

This all assumes, of course, that you sell to realize the profit. If you don’t take the money and run at some point, you may end up with little more than tears to fill an empty beer mug. Consider this: many junior gold stocks, including some in the above list, dried up and blew away after October 1980. Investors who held to the bitter end not only saw all their gains evaporate but lost their entire investments as well. Keep that in mind, because all bull markets eventually come to an end – even golden ones.

Returns from that era have been written about before. So I can hear some investors saying, “Yeah, but that only happened once.” Au contraire. Read on.

There have been several mini-manias in gold and especially gold stocks outside of the 1979-’80 period. Gold was flat during the two years of the “Hemlo rally” but something else ignited a bull market – spectacular discoveries…In mid-1982 Golden Sceptre and Goliath Gold discovered the Golden Giant deposit in the Hemlo area of eastern Canada. Gold prices rallied that summer, setting off a mini bull market that lasted until the following May. The public got involved, and as you can see, the results were impressive for such a short period of time.

Gold producers, on average, returned over 70% on your money during this period. While this isn’t the same spectacular gains from just a few years earlier, keep in mind this occurred in about 12 months’ time. This would be akin to a $30 gold stock soaring to $51.75 by this time next year because it’s located in a significant discovery area.

Once again, it was the juniors that brought the dazzling returns.

The average return for these junior gold stocks that had a direct interest in the Hemlo area exceeded a whopping 4,000%. A $0.50 junior stock today would exceed $20. By May 1983 – roughly a year after it started – gold prices started back down again, spelling the end of the bull market. Another reminder that one must sell to realize a profit.

What is especially impressive about the “Hemlo rally” is that it occurred without the gold stock industry as a whole participating. This tells us that a big discovery can lead to enormous gains, even if the greater industry is flat. In other words, we have historical precedents that humongous returns are possible without a mania, by owning stocks with direct exposure to a discovery area.

Junior exploration companies were now starting to collect on the “intellectual capital” they’d inherited from the majors. Another series of gold discoveries in the mid-1990s set off one of the most stunning bull markets in the current generation.

Companies with big discoveries included Diamet, Diamond Fields, and Arequipa. This was also the time of the famous Bre-X scandal, a company whose management was later found to have been “salting” drill intercepts….

By the summer of ’96, investor interest had sparked a minor mania, and companies with little more than a few drill holes were selling for $20 a share. The table below, which includes some of the better-known names of the day, is worth the proverbial thousand words and, if you’re the kind of investor with the courage to buy low and willingness to sell during a frenzy, it can be worth a million dollars.

The average producer more than tripled your money during this period. Once again, these gains occurred in a relatively short period of time, in this instance inside of two years.

Here’s how winning juniors performed. Hold on to your hat.

Many analysts refer to the 1970s bull market as the granddaddy of them all – and to a certain extent it was – but you’ll notice that the average return here exceeds what the juniors did in the 1979-’80 market.

Gold Stocks and the Greater Depression

Those of you in the deflation camp may dismiss all this because you’re convinced The Great Deflation is ahead. Fair enough. But you’d be wrong to assume gold stocks can’t do well in that environment.

Take a look at the returns of the two largest producers in the U.S. and Canada, respectively, during the Great Depression.

During a period of soup lines, crashing stock markets, and a fixed gold price, large gold producers handed investors five and six times their money in four years. If deflation “wins,” we still think gold equity investors can, too.

Before you sell your kids to buy gold stocks, be aware of the fine print: history may not repeat. There’s no law that says we have to get a mania; it’s a good bet, we’ve no doubt, but it could be different from what we saw before – maybe the mania occurs just in gold and not the stocks or maybe it’s only in certain geographical areas or it takes longer than what some investors have the patience for. The point here is simple: don’t invest so much that you get wiped out if it doesn’t come to pass.

In the end, though, we think the efforts by governments around the world to reflate the economy will work. Throughout history, a fiat currency system has never lasted – not even once. Eventually, they all fade away, and whether or not gold (or silver) are somehow figured into the monetary replacement, the odds are high that we’ll see a mania of epic proportions in our industry, as the world’s current fiat currencies implode.

Truly life-changing gains will be reaped by those with the foresight, courage, and cash to act before it arrives so, yes, someday we think your favorite gold stock will sell for $200. Or perhaps a lot more

1. Is Gold Miners’ Current Performance Stench About to Turn Into That of Perfume?

GDX has underperformed the S&P 500 by almost 50% in the past 15 months and is down almost 14% in the past 90 days. That being said, could be that it is about to make a move that will turn the present stench into that of perfume.

2. Get Positioned Now – Gold Stocks Are About to Bottom

Forecasts are only a guide or a potential road-map as no one can predict the future but we can assess risk, reward and probabilities. [Given that,] we think that the current probabilities favor a secondary bottom in gold stocks and that, very soon, the risk/reward dynamic will be heavily in favor of longs. [I explain and illustrate my conclusions below.] Words: 484; Charts: 2; Tables: 1