crude oil apart comes the question of which type of crude makes for a better investment. Recent historical data puts that question to rest, as one clear winner emerges. [Read on!] Words: 1300

So says Jared Cummans (www.CommodityHQ.com)  in edited excerpts from his original article which Lorimer Wilson, editor of www.munKNEE.com (Your Key to Making Money!), has further edited below for length and clarity – see Editor’s Note at the bottom of the page. (This paragraph must be included in any article re-posting to avoid copyright infringement.)

Cummans goes on to say, in part:

One of the most important issues is the varying types of oil and the differing benchmarks for crude oil prices around the world… Below are the major descriptive factors:

With these two key factors, investors can then begin to price these different types of oil on the world market. Currently, there are two major benchmarks for world oil prices:

Both are light sweet crude oils although WTI is generally sweeter and lighter than its European counterpart.

Perhaps the easiest way to track the historical performance of the commodities involves two ETFs, the United States Oil Fund (USO) which tracks WTI futures, and the United States Brent Oil Fund (BNO) which offers exposure to Brent crude. Since its inception in mid 2010, BNO…[has] been slaughtering WTI, with a return of approximately 75% for the fund, [compared to] USO [which] has gained just 25%… Narrowing the time frame to just 2011, BNO jumped 19.5% compared to a return of -2.1% for USO. As for this year, BNO is up 15% YTD while USO is up just 7.4% by comparison. 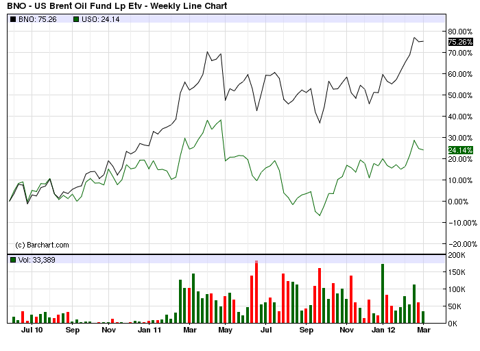 Brent has been able to outdo its competitor by a large margin, despite both commodities being relatively similar in the grand scheme of things, [because] the past two years have seen a fair amount of volatility from the Middle East, a region that produces a fair amount of the world’s Brent supply.

[Should the region continue to remain unstable] it may be a while before we see [the price of] Brent fall. If…[you tend to believe that will be the case then] Brent is the best crude option for you as it has the potential to continually outperform WTI.

When it comes to the future of oil, there is much speculation, but little hard analysis. You have the official line from the IEA that has oil prices stopping their abrupt rise and creeping up at a comfortable pace for the next 25 years. You have peak oilers shouting that we’ve run out of oil and the end is near. [Let’s take an indepth] look at the various models and forecasts [and determine] what is logical, what is wild speculation, and what you should expect for oil prices in the coming years. Words: 1410

It wasn’t supposed to be this way. By now, Peak Oil was supposed to be a fact of daily life. People were supposed to be lined up at gas stations, struggling to buy US$10-a-gallon gas. Solar and wind companies were supposed to occupy prominent places on the Big Board instead of going out of business right and left. People were supposed to have diminished expectations – resigned to shivering in the dark. Free markets, a flawed system of commerce, were to be exposed as a misleading theoretical construct, incapable of providing for people’s needs…The world was running out of resources…Now, suddenly, there is a different tale to tell and the New York Times is up to the task. Up and down the Americas, we learn, there is an Oil Boom. Suddenly, we have gone from enforced austerity to an unheralded plenty. Middle East, watch out! [But all is not as it seems. Let me explain.] Words: 1440

In a recent article called There Will Be Oil in the WSJ, Daniel Yergin once again attempts to debunk the concept of peak oil and sees global production capacity growing to 110 mmbpd by 2030, followed by slow decline. In this short report I take a quick look at his key arguments in an effort to bring further convergence between the peak oil and business-as-usual camps. [Unfortunately, I failed to do so concluding that Peak Oil is still very much with us. Let me explain.] Words: 2032

The price of oil is headed “unimaginably higher” in the next few years – to somewhere north of $300 a barrel – because of two very simple forces. Words: 708

The US military’s Joint Operating Environment report from the US Joint Forces Command has warned that surplus oil production capacity could disappear by 2012 and that there could be serious shortages by 2015 with a significant economic and political impact. Words: 455

Once economic growth recovers, it is likely we will return to the market conditions of 2008. The price of $140 per barrel oil was not an aberration; it was a warning. An oil crisis is coming that could prove devastating to future economic growth. Given the long lead times of 5-to-10 years from oil discovery to production, we need to act now to avert this outcome. Words: 862

Share
Previous U.S. Financial Problems Have Horrendous Implications for Markets and Systemic Stability – Here’s Why (+2K Views)
Next You, Me and Online Media Piracy: How Much Does It Cost the U.S. Economy?