Bottom Line: Make Up Of Workforce Is Suppressing Wages

a record number of job openings, we can be assured that there is precious little slack in the labor market so why do wage growth measures fail to provide accurate conclusions. The answer is that the overall labor composition has shifted toward lower paid entry level Millennials replacing peak earning Boomers heading into retirement. Let me explain with the help of some enlightening charts.

This version of the original article by Kurt Kallaus has been edited for length (…) and clarity ([ ]) by munKNEE.com to provide a fast & easy read 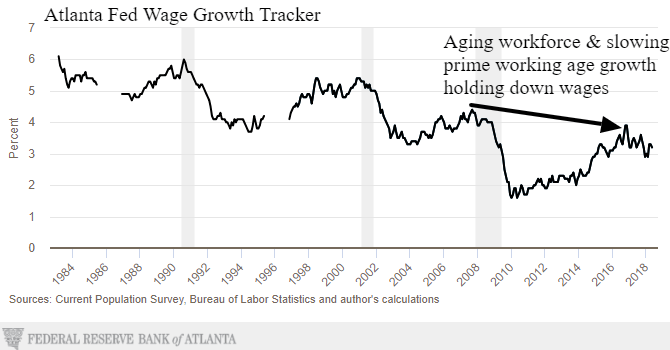 When the massive Baby Boomer wave collectively occupied the peak earning echelon of their careers, there was no room for further wage inflation. As this senior segment shifted into an accelerated life of leisure phase, the labor pool began losing our most highly compensated this decade while the lowest paid segment in their 20’s began filling the ranks. Over the next decade, lower paid Millennials will start to populate the ranks of the highly compensated, replacing their parents and ameliorating the artificial appearance of downward wage pressure. 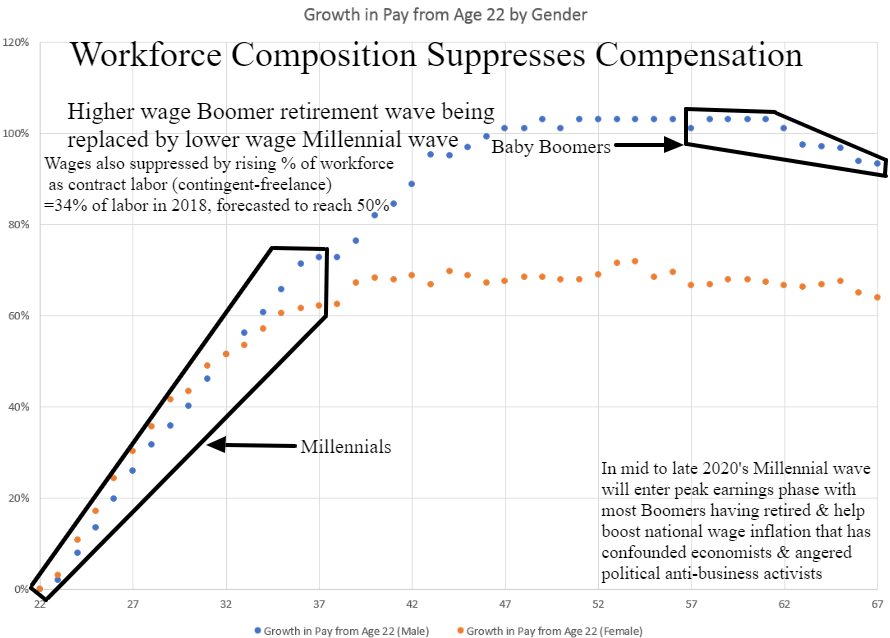 Historically, we would have expected the above normal job openings in 2014 and 2015 to trigger above normal wage inflation and signal an overheating economy as in 2000 and 2007. This time is very unique with the secular demographic of an aging population quelling inflation and cooling the ability of 1st world economies to add sufficient labor to stoke the normal overheating phase of this expansion. As long as inflation and credit risk remains low in a labor constrained world, there is little reason to expect a credit contraction or recession anytime soon. For the foreseeable future, baring a temporary trade war, we should expect to see the unfilled jobs and unemployment near record extremes.

Although income growth is slower than normal, it should be noted that overall income growth is still accelerating. Given the extreme worker shortage, it would not be surprising to see above-average wage growth in many industries when isolating for age. 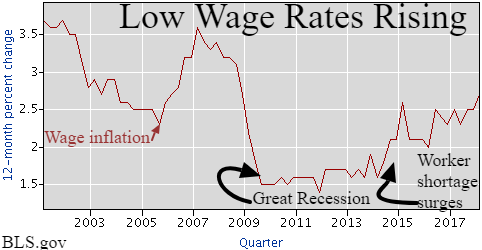 Finally, we can look at the true demand for workers and their respective wage potential with a quick read of the Quit rate. As the labor inflation heats up with elevated confidence in job security, employees are trading up to better-paying jobs and employers are offering ever higher compensation to steal labor from other firms. Currently, millennials are sanguine about their strong position to demand higher benefits and more willing to quit their current job for a better vocation. 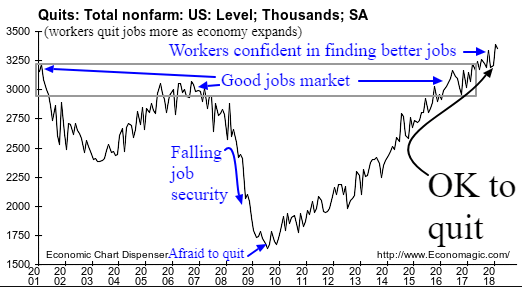 While economic peaks are marked by low unemployment and a high level of job openings, these are poor economic cycle timing metrics. The long-term labor shortage and excess credit conditions today imply there is more time before a recession becomes imminent.