Be Bullish on Both Stocks & Gold – Here’s Why

Many investors seem to think that precious metals and equities have a negative correlation and while this may be true at times, they generally move up together. Given the current environment and the forces coming into play, I remain bullish on both the market and precious metals.

People have been saying the market is overvalued for some time now, but stocks just keep heading higher…[and I think that] both the S&P 500 Index and the Nasdaq Composite Index should be heading higher in the following months…

Due to the monetary stimulus, Money Market Funds (MMFs) are at an all-time high but are starting to decline and this equates to money moving from deposits and less risky assets into riskier higher-yielding assets, namely stocks… What moves prices, ultimately, is supply and demand and what we see here is a lot of future demand coming our way.

Behind all of this liquidity, of course, lies the Federal Reserve and other major central banks around the world. This increase in MMFs is a direct result of the monetary injections the Fed has been doing to varying degrees. since the 2007 financial crisis.

What we saw during the “covid crash” was, once again, unprecedented, but perhaps unsurprising, actions by the Fed. Not only did the Fed ramp up QE, but it also added new assets to its balance sheet like ETFs and corporate debt and there is no doubt in my mind that the Fed will continue to do whatever it needs to in order to prop up the markets, including yield control.

More importantly though, at this point, the Fed can’t raise rates or taper its stimulus because the Treasury can’t afford it. (Source: Wikipedia)

The U.S. debt to GDP ratio has now surpassed 100%, and there doesn’t seem to be a plan for reducing it any time soon. However, the Treasury has been aided by the Fed in order to keep a lid on its interest. Percentage-wise, net interest actually declined until 2018.

…If the Fed lets rates rise beyond 2% or even 3%, though, the already delicate debt situation of the U.S would be put into question, and international buyers of Treasuries, which are already becoming hard to find, would quickly disappear, putting even more pressure on rates.

Inflation and the Price of Gold

The only way out of this situation is inflation, which is exactly what the Federal Reserve and Treasury want since it will reduce the weight of the debt. Low rates, plus higher inflation, means negative real rates, and that is a very good thing for gold. 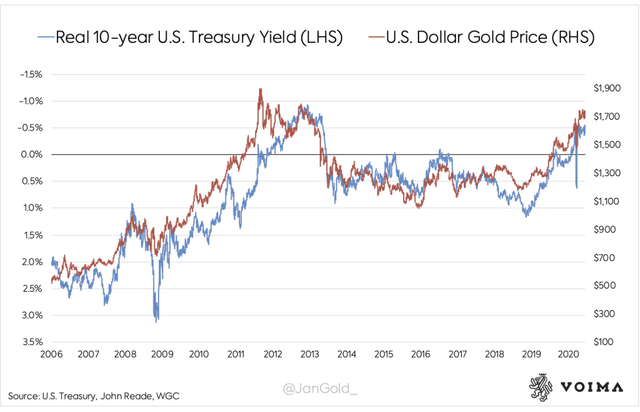 As we can see above, gold is closely correlated with Treasury yields and has rallied the most as real yields became negative, like in 2011 and 2020. The ultimate hedge against inflation is precious metals, and I expect gold, silver and platinum to head much higher in the next months and years. Once again, we could see a similar run-up similar to what we saw in the three years leading up to and following the financial crisis. Gold rallied even harder after the financial crash, which makes it all that more important to hold to diversify.

Some economists have indeed been talking about inflation for years, which hasn’t materialized. Central Banks around the world have printed money at a faster rate than ever before, but prices just don’t seem to go up. First off, I would argue this is not 100% true.

While many fundamental problems are plaguing the Western economies, I do think that:

In any case, I recommend keeping a diversified portfolio that includes both these assets.

Editor’s Note:  The original article by The Value Trend has been edited ([ ]) and abridged (…) above for the sake of clarity and brevity to ensure a fast and easy read.  The author’s views and conclusions are unaltered and no personal comments have been included to maintain the integrity of the original article.  Furthermore, the views, conclusions and any recommendations offered in this article are not to be construed as an endorsement of such by the editor. Also note that this complete paragraph must be included in any re-posting to avoid copyright infringement.

munKNEE.com has joined eResearch.com to provide you with individual company research articles and specific stock recommendations in addition to munKNEE’s more general informative articles on the economy, the markets, and gold, silver and cannabis and psychedelic stock investing.
Check out eResearch. If you like what you see then…

Share
Previous The Bull Market Has Finally Matured Into a Full-fledged Epic Bubble!
Next COVID-19 Is Largest Shock To Global Economy In +100 Years