Are You In the American Middle Class? – Find Out With Our Income Calculator

Lorimer Wilson September 26, 2018 Comments Off on Are You In the American Middle Class? – Find Out With Our Income Calculator 1,663 Views

The share of adults who are middle class varies widely across U.S. metropolitan areas. Our newly updated calculator lets you find out which group you fit in, first compared with other adults in your metro area and among American adults overall, and then compared with other adults in the U.S. similar to you in education, age, race or ethnicity, and marital status. Are you in the American middle class? Find out with our income calculator. 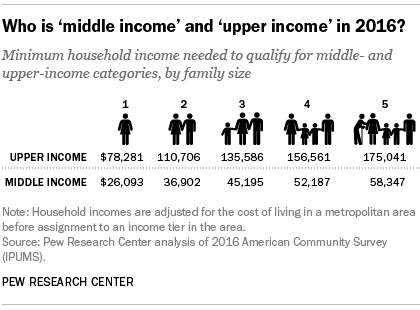 The 10 areas with the highest concentrations of middle class adults are located in the Midwest or the Northeast, with the exception of Ogden-Clearfield, UT. These areas are also more reliant on manufacturing than the nation overall. 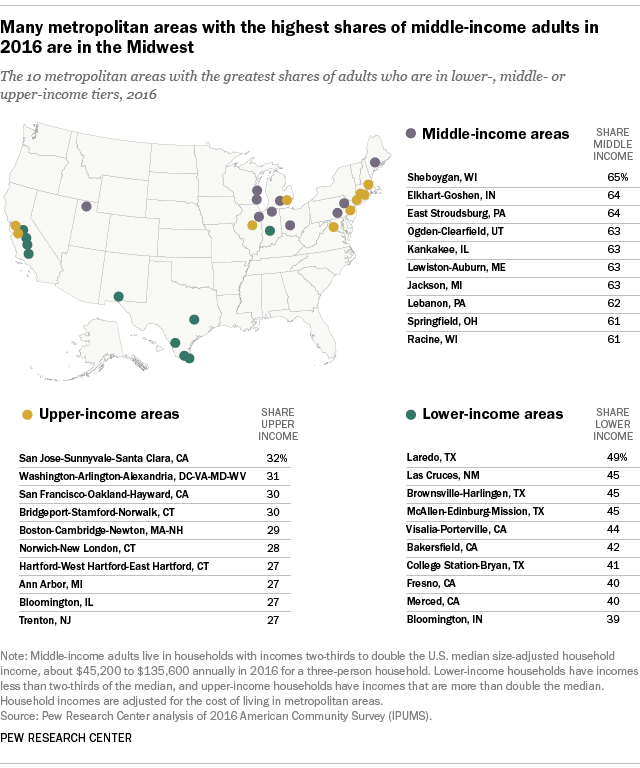 This analysis encompasses 260 of some 380 metropolitan areas in the United States, as defined by the Office of Management and Budget. The 260 metropolitan areas included are the maximum number of areas that could be identified in the Census Bureau data used for the analysis (the Integrated Public Use Microdata Series, or IPUMS). Together, these areas accounted for 79% of the nation’s population in 2016.

A metropolitan area consists of at least one urbanized area with a population of 50,000 or more people, plus neighboring areas that are socially and economically integrated with the core. Metropolitan areas may cross state boundaries, such as the Washington-Arlington-Alexandria, DC-VA-MD-WV, area.

“Middle-income” Americans are adults whose annual household income is two-thirds to double the national median, after incomes have been adjusted for household size. In 2016, the national middle-income range was about $45,200 to $135,600 annually for a household of three (incomes in 2016 dollars). The same standard is used to determine the status of households in all metropolitan areas after their incomes have been adjusted for the cost of living in the area.

The cost-of-living adjustment for an area was calculated as follows: Jackson, Tennessee, is a relatively inexpensive area, with a price level that is 17.9% less than the national average. The Hawaii metropolitan area known as Urban Honolulu is one of the most expensive areas, with a price level that is 24.4% higher than the national average. Thus, to step over the national middle-class threshold of $45,200, a household in Jackson needs an income of only about $37,150, or 17.9% less than the national standard. But a household in Urban Honolulu needs a reported income of about $56,250, or 24.4% more than the U.S. norm, to join the middle class.

The national estimates presented in the analysis encompass the U.S. adult population, including people outside of the sample of 260 metropolitan areas.

The Census Bureau’s 2016 American Community Survey was conducted from January 2016 to December 2016. Respondents were asked to report their income received in the 12 months before the survey date. In principle, the 2016 ACS includes income data from a total of 24 months, from January 2015 to December 2016. Estimates for earlier years are from the Current Population Survey, Annual Social and Economic Supplements. The income data in these surveys pertain to the preceding calendar year. Thus, the assignment of adults to an income tier in, say, 2011 is based on their household income in 2010.

Differences between numbers or percentages are computed before the underlying estimates are rounded. Estimates may not sum to 100% due to rounding. Additional details on the methodology are available in our earlier analyses.

Share
Previous These 5 Low Beta Stocks Should Do Well
Next Americans Aren’t Getting Their Medical Money’s Worth – Does Your Country Rank In the Top 20?