Are We Headed Down the Path to Another Great Depression? (+2K Views)

Nowadays, with the global recession on the tip of everybody’s tongue, we point 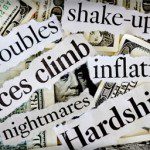 So says the introduction to an infographic from www.paydayloans.co.uk which is brought to you courtesy of Lorimer Wilson, editor of www.munKNEE.com (Your Key to Making Money!). This paragraph must be included in any article re-posting to avoid copyright infringement. The International Monetary Fund (IMF) painted a stark picture of the global economy this week slashing the outlook for world growth while forecasting a damaging recession in Europe that will leave no country, including Canada and the U.S., unscathed. The report stated that financial conditions have deteriorated, growth prospects have dimmed, and downside risks have escalated and, as such, policymakers must immediately move forward together to save the world economy from falling into a 1930s-style death spiral because the longer corrective action is put off the worse it will actually get. Words: 640

3. The 5 Stages of Collapse: Where Are We Currently?

In light of the unfolding global sovereign debt fiasco that has turned out to be less of a waterfall and more of an avalanche [than anticipated I present below a description of the 5 stages of collapse and discuss our preparedness. If you haven’t read it yet, perhaps you should.] It has been read by 70,000+ people so far – and is still being read by an average of 1,500 people each month – on my site alone. Words: 2525

4. Campbell Comments On: “Is This 1931 All Over Again? Krugman, Roubini and Ferguson Think So!”

Why read: It is foolish not to consider the possibility of depression, particularly in the face of the preponderance of commentary over the past many months that rampant inflation is on the horizon. [Here I review, analyze and comment on one such article on that possibility.] Words: 697

5. Events Accelerating Towards an Ultimate Dollar Catastrophe! Here’s Why

There is an all out assault on the part of global central banks to destroy their currencies in an effort to allow their respective governments to continue the practice of running humongous deficits. In fact, the developed world’s central bankers are faced with the choice of either massively monetizing Sovereign debt or to sit back and watch a deflationary depression crush global growth. Since they have so blatantly chosen to ignite inflation, it would be wise to own the correct hedges against your burning paper currencies.

8. Investors Should Prepare Now for Coming Inflationary Depression – Got Gold?

It is an old saying that the “road to hell is paved with good intentions”. Well, in recent years, that road has been changed to a super-highway! America was put on that super-highway a few years ago and right now we are traveling at break-neck speed toward the financial abyss. Words: 1132

9. What’s Coming: A Hyperinflationary or A Deflationary Depression?

10. The Scene is Set: The Euro – and Other Currencies – Will Collapse Resulting In a Hyperinflationary Depression

It’s incredible that the Mayans forecast 2012 would be the end of a major era. It looks, today, like we are standing on the eve of massive changes in the world that will have consequences for a long, long time to come. The scene is already set….the euro will collapse, and…other major currencies will collapse. The consequences of these (eventual) collapses will be horrible because we will have a hyperinflationary depression.