A Stock Market Bust Is In the Making – Here’s Why

monetary inflation growth has now been either flat or declining for the last three years, depending on what time frame one looks at. Conclusion: Earnings, and ultimately valuations, must fall as an ever-expanding rate of monetary inflation is unsustainable and as interest rates cannot forever be kept artificially low.

The comments above and below are excerpts from an article by Atle Willems (liabridge.com) which may have been enhanced – edited ([ ]) and abridged (…) – by

Such behavioral forces tend to dominate at market extremes as evidenced by exceedingly high or low valuations at market peaks and troughs. 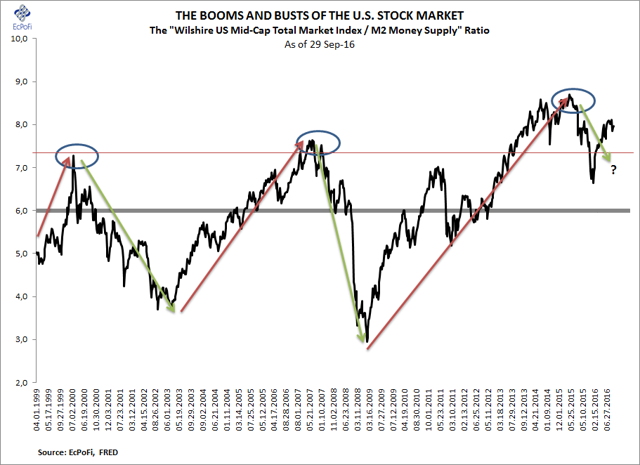 During the bull market, earnings and the valuations of those earnings (e.g. the P/E ratio) increase. Stock prices hence benefit from both higher earnings and higher valuation multiples.

…The expansions of both must one day come to an end, however, as they’re partly based on unsustainable foundations;

Any attempt by governments and the banking system to do so over the longer term would ultimately trigger the breakdown of the monetary system as hyperinflation would set in rendering the currency worthless and hence useless as the medium of exchange (money).

…Swings in the money supply growth rate (the money cycle) have a very similar effect on the stock market as it has on the various economic aggregates measured in monetary terms – an increase (decrease) pushes them up (down)…The stock market can react more violently, [however,]…than the economy at large can.

The upward swing of the money cycle, whether it’s driven by bank credit growth or the central bank monetizing debt, or both, will result in:

than they otherwise would be…[but] are not solely created from within the market. Instead, inflated earnings and artificially low interest rates are created outside of the market by governments, central banks, and banks interfering with the market through deficit spending, bank credit growth and, in recent years, debt monetization by central banks…

The rate of monetary growth, [however,] must one day…[cease] to expand, or even contract. The shorter term U.S. money supply growth rate (y/y basis) has now been in the former camp (stagnation) for the last three years or so [as the chart below shows]. 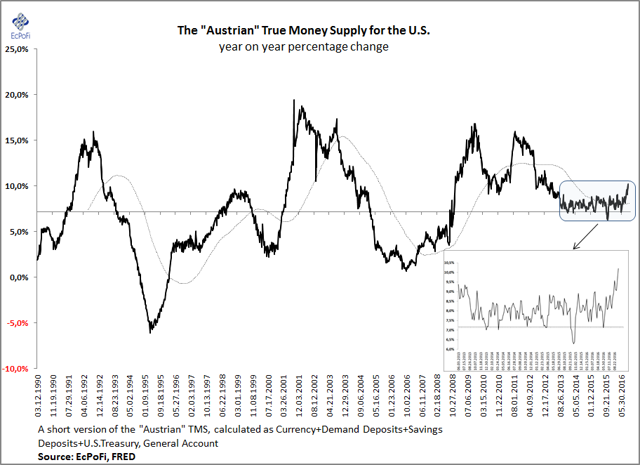 while the longer term growth rate (5 year basis) [as shown in the chart below] has been in the latter camp (contraction) during the same period. 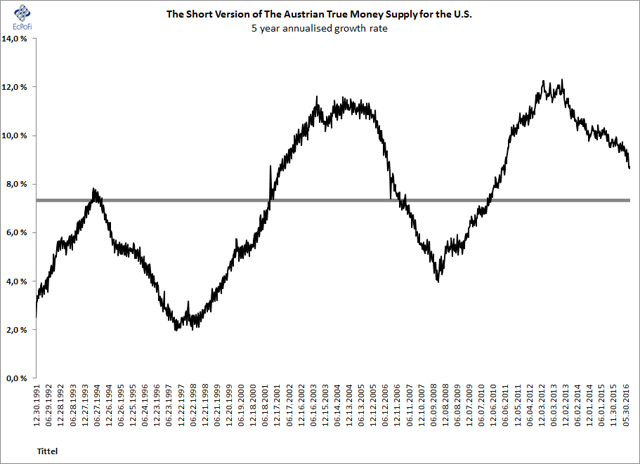 Based on the last two stock market peaks (2000 and 2007), the longer term growth rate is perhaps the more important of the two. When the money supply growth rate stagnates or contracts, corporate earnings will then typically contract as what previously drove them up now instead exerts downward pressure on earnings. This earnings decline is already well underway [as illustrated in the chart below]. 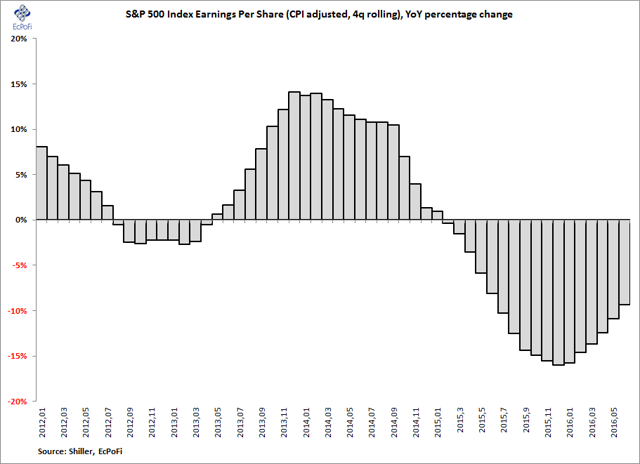 Interest rates will rise for the same reasons as money becomes “scarce” instead of “abundant”. This development remains largely absent [today], except for junk bond yields which are markedly higher today than a couple of years back. The stock market hence is “over-valued” to the extent [that] market participants don’t acknowledge that: 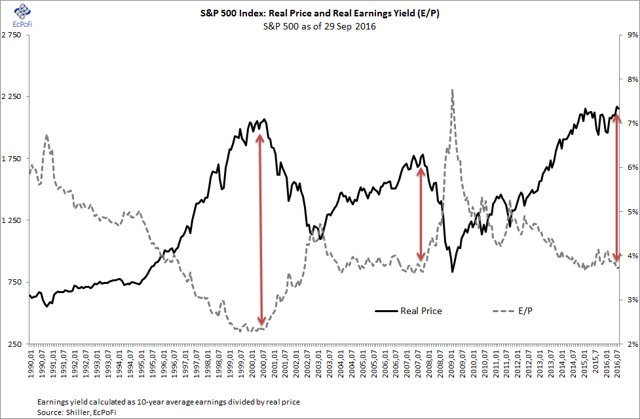 …Market participants will likely be proven wrong [soon] as a key aspect and a precursor of a stock market bust is stagnation or contraction of the money supply growth rate following a longer period of expansion. Bank stocks, where such troubles are often revealed early, have signaled for the past year or so what’s in the making: a stock market bust.