3 Reasons To Expect An Even Stronger U.S. Dollar

Where will the dollar go from here? My answer: Though currency market volatility is likely to continue, I still see a stronger dollar over the longer term. Here’s why:

The above comments, and those below, have been edited for the sake of clarity and brevity to provide a fast and easy read and have been excerpted from an article* by Russ Koesterich, CFA (blackrockblog.com) originally entitled Why the Dollar’s Strength Can Continue and which can be read in its unabridged form HERE.

The Fed will likely begin raising rates later this year, and possibly as early as September…[while] most other central banks will likely remain in easing mode.

…Over the last 10 years, the U.S. current account deficit has been cut roughly in half, and a large part of that improvement has been a function of surging U.S. domestic oil production. Looking forward, rising U.S. production should continue to support a strong dollar.

2. U.S. dollar rally may just be getting started

Since the 1970s when the Bretton Woods fixed-currency regime ended and currencies began floating, a typical dollar rally has lasted roughly six to seven years and the increase in the dollar we’ve seen so far this year is muted compared with the strong dollar episodes of the early 1980s and late 1990s.

In past dollar rallies, the dollar’s rise is usually not uniform, with lots of dispersion across different currency pairs, and it’s characterized by sharp reversals. 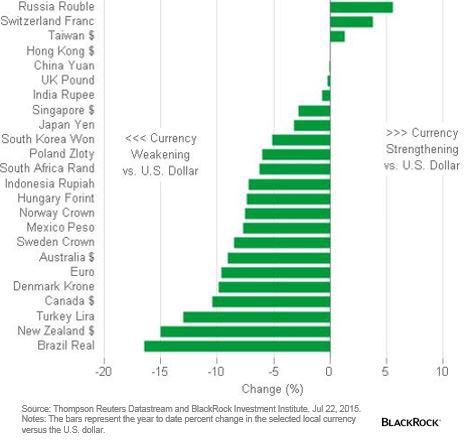 According to BlackRock Investment Institute research, history suggests the dollar usually rises moderately before the first Fed rate hike, then stumbles for a year (as fixed income markets often take a hit), before resuming its rally. The same pattern could repeat itself this time around.

Implications of a stronger dollar for investors

Assuming the dollar continues to appreciate over the longer term, there are several implications for investors. A dollar that remains strong, albeit with some reversals, would:

1. Here’s Why the U.S. Dollar Is Going Through the Roof

When markets expect that U.S. interest rates will be hiked, it typically strengthens the dollar because people rush to change other currencies into dollars where they can make more money and this higher demand for the USD drives its value up.

2. Skyrocketing U.S. Dollar Is a VERY Bad Sign For Global Economy – Here’s Why

The U.S. dollar surged in value by 11% in 2014, appreciating against all main currencies in the world in 2014 including gold. The infographic below attempts to answer the obvious question, “What is behind this surge in value for the dollar?”

4. Why the USD Is So Strong & the Implications For the Economy & Stock Market

Given the recent upside breakout in the U.S. dollar I’ve been getting a lot of questions about the reasons behind the strength as well as implications for the stock market. Here are my views on the situation.