Will Stocks & Bonds Get Killed When Interest Rates Rise?

Lorimer Wilson December 2, 2014 Comments Off on Will Stocks & Bonds Get Killed When Interest Rates Rise? 2,010 Views

once the Fed finally does decide to raise rates. The historical record, however, doesn’t clearly back up that argument. Let me explain.

The above introductory comments are edited excerpts from an article* by Ben Carlson (awealthofcommonsense.com) entitled What Happens to Stocks and Bonds When the Fed Raises Rates?.

Because interest rates play such an important role in the economy and the markets, investors are concerned with what will happen to stocks and bonds once the Fed finally makes its move to tighten monetary policy. This concern makes sense from a textbook standpoint — rising rates hurt bond performance and increase the cost of borrowing for corporations, among other things.

For context, here’s the Fed Funds Rate, the short-term interest rate set by the Federal Reserve, going back to the mid-1950s:

You can see the Fed has raised rates on many occasions in the past, which gives us plenty of opportunities to see the historical impact on the markets. I looked back at all of the biggest rate hikes included in this time frame to see what happened to both stocks and corporate bonds from the time the Fed started raising rates until rates peaked. Below are each of those Fed rate hikes along with the total returns for stocks and bonds throughout the entire period of rising rates (S&P 500 and long corporate bonds from Ibbotson data):

The track record for stocks doesn’t look too bad. Only 2 down periods out of 14 of the biggest rate increases and the worst one included one of the worst bear markets of all-time (1973-74). These are total returns, but the average annualized return for the S&P 500 was actually right at the long-term average of around 10% per year.

Bonds lost money half the time, which makes sense as bond prices and interest rates are inversely related. This is why bond investors have been preparing for a rise in rates for some time now, even though it just hasn’t happened yet…

Rates peaked just before the 1987 Black Monday crash as well as at the beginning of the 2000-2002 bear market and the 2007 rate hike ended just before things started to get interesting in the most recent crisis so it also makes sense to see how stocks and bonds performed after the Fed stopped raising rates. I looked out one, three and five years from the time the Fed finally stopped raising rates in each of the instances listed above. Below are the annualized returns for each using the end date as the starting point for performance purposes:

On average, things look pretty good but there’s a wide range in the performance numbers, even going out to the five year mark. Bond returns post-rate hike were juiced from higher yields and the fact that the Fed then reduced rates yet again. You can see from the graph of historical rates from above that there are plenty of peaks and then rates are quickly lowered again.

and a whole host of other factors have to be taken into account for today’s markets along with any of the historical data.

Also, the total returns for bonds following most of these rate increases were so huge because the bond yields were so high before they started raising rates. That’s not the case today. The experience in 1950s and 1960s makes much more sense as a historical precedent for today’s bond environment than the 1970s, 80s, 90s or 00s.

[In spite of the fact that] the markets don’t have to react a certain way just because they did so in the past, many investors are absolutely certain stocks and bonds are both going to get killed once the Fed finally does decide to raise rates. The historical record, however, doesn’t clearly back up that argument. It’s never going to be that easy.

* http://awealthofcommonsense.com/happens-stocks-bonds-fed-raises-rates/) Subscribe to receive email updates and my monthly newsletter by clicking here.)

Sooner or later, the Federal Reserve will begin normalizing monetary policy, which means higher interest rates are coming, and this has investors rightfully worried because higher rates mean higher interest costs, which should be bad for profits and ultimately stocks. New research, however, suggests that a severe S&P reaction to such hikes is to be expected. Here’s why. END_OF_DOCUMENT_TOKEN_TO_BE_REPLACED

2. Myth #1: There Is A Direct Relationship Between Interest Rates & Stock Prices

Events and conditions do not make investors behave in any particular way that can be identified as shown in this analysis of the supposed relationship between interest rates and stock prices. So much for the popular claim that “Interest rates drive stock prices”! END_OF_DOCUMENT_TOKEN_TO_BE_REPLACED

3. Interest Rates Play A MAJOR Role In the Behavior Of the Stock Market – Here’s Why

4. Don’t Worry About the Threat of Higher Interest Rates Hurting Stocks – Here’s Why

History clearly shows that stocks don’t fall during periods of rising interest rates. Sure, they might fall a little when a rate hike is announced – maybe for a week or so – but they usually bounce back quickly – and then they go higher. END_OF_DOCUMENT_TOKEN_TO_BE_REPLACED

5. What Affect Will Rising Interest Rates Have On Inflation & the Future Price of Gold?

Though the stock, bond and currency markets, at the moment, are preoccupied with the question of when the first interest-rate increase will happen, the real story lies in where interest rates are ultimately headed because that answer defines where stock, bond and currency prices are ultimately headed and the reality, dear reader, is that the Fed simply cannot — and will not — allow interest rates to crawl very high. Why is that you ask? Read on! END_OF_DOCUMENT_TOKEN_TO_BE_REPLACED

6. Don’t Fear End of QE or Beginning of Higher Interest Rates – Here’s Why

The Fed and the bond market are responding appropriately to declining risk aversion and a somewhat improved economic outlook. There is no reason to fear the end of QE or the beginning of higher short-term interest rates. Let me explain further. END_OF_DOCUMENT_TOKEN_TO_BE_REPLACED

7. Higher Interest Rates Will Come Once These 4 Economic Conditions Are Met

4 economic conditions need to be in place for interest rates to rise ahead of – and independent of – the Fed’s forward guidance. The economy met only one of those conditions to date but will likely meet all four by the end of the year…What follows is a status report on the four conditions. END_OF_DOCUMENT_TOKEN_TO_BE_REPLACED

8. Interest Rates NOT Rising Any Time Soon – Even With Fed Tapering. Here’s Why

Everyone and their mom is expecting long-term interest rates to rise now that the Fed is tapering its bond buying programs. I have a couple of problems with this line of thinking because, although it seems like reducing demand for a security (i.e. tapering QE) would result in a drop in price, when you really think about how quantitative easing works this makes no sense and, secondly, the market is telling us this makes no sense. Let me explain. END_OF_DOCUMENT_TOKEN_TO_BE_REPLACED

9. What Affect, If Any, Will Rising Interest Rates Have On the Stock Market

The belief is that rising interest rates (as is currently occurring) are a sign that the economy is improving as activity is pushing borrowing rates higher. In turn, as investors, this bodes well for corporate profitability which supports the current valuations of stocks in the market. While this seems completely logical the question is whether, or not, this is really the case? END_OF_DOCUMENT_TOKEN_TO_BE_REPLACED

Share
Previous The Great Depression: What Caused It & What Can Be Learned From It?
Next Noonan on Gold & Silver: “Odds favor retesting lower from here” 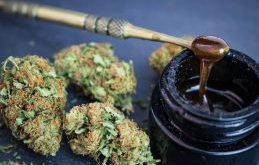 Forget the Hype! Cannabis Stocks Are DOWN -13.1% YTD