Why Does Gold Fall When Financial Crises Worsen? (+3K Views)

Why is gold  falling as the financial crisis worsens? After all, isn’t gold some sort of safe haven? [Let me explain.]

So says Plan B Economics (www.planbeconomics.com) in an article* posted on SeekingAlpha.com which Lorimer Wilson, editor of www.munKNEE.com (Your Key to Making Money!), has further edited ([ ]), abridged (…) and reformatted below for the sake of clarity and brevity to ensure a fast and easy read. The author’s views and conclusions are unaltered and no personal comments have been included to maintain the integrity of the original article. Please note that this paragraph must be included in any article re-posting to avoid copyright infringement.

Investors need to understand two things in that regards:

One only has to go back a couple years to see how gold reacts during a financial crisis. The chart below shows the price of gold during the financial crisis that arguably began with the collapse of Bear Stearns in March 2008…During this time, gold prices fell by about 25% and subsequently recovered all losses. This was a scary ride for anyone holding gold at the time, but it’s an incomplete view of gold’s performance during the crisis. 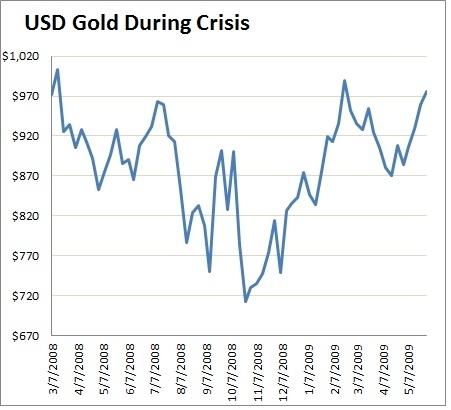 The second chart below shows gold during the same period priced in US dollars, euros and Canadian dollars (indexed to 100 for comparison purposes). During the 2008/2009 crisis…the US dollar was rising while the euro and Canadian dollar were falling and this is reflected in the different gold prices. Gold priced in Euros and Canadian dollars fell less and recovered faster than gold priced in US dollars. This is precisely because the US dollar was so strong during that period. However, as the monetary response began to unfold (QE1 announced December 2008) and trillions of US dollars were unleashed to backstop the financial system, gold in all currencies began to rally dramatically. 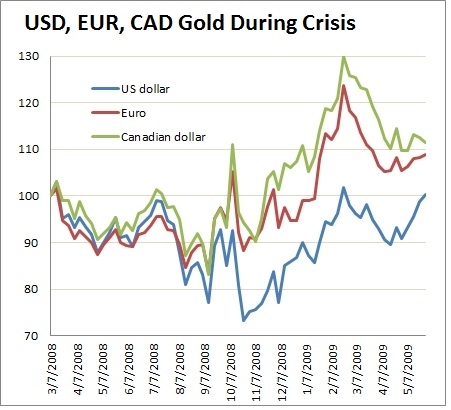 Really, the basic steps are straightforward:

For US investors, in my opinion, a crisis in which a skyrocketing dollar sends gold plummeting in US dollar terms could create a big gold buying opportunity, like it did in 2008. That said, the basic steps outlined above could take months to fully materialize. The market is disappointed (read: impatient) with the Fed’s lackluster curve-flattening program (i.e. Operation Twist) because it delays the possibility of additional quantitative easing. However, as the economy continues to deteriorate, the probability of QE3 rises [and] this process could take a long time, and the Fed won’t act until it must act. The Fed simply no longer has the credibility and political support to act boldly and pre-emptively, so it must wait until there’s blood in the streets and politicians are begging for relief.

For non-US investors that own gold, pay attention to the price of gold in your domestic currency because, unless you’ve hedged, your exposure is relative to your home currency, not US dollars.

A few weeks ago (August 31st) I wrote about how gold was starting to top and that everyone should expect a very sharp drop to the low $1600 area… [and] only three days later gold topped and it has not stopped falling since. At that time [however]…gold was still building the top pattern so I could not say how long a recovering would likely take nor did I know exactly when to re-enter a long position but now that we have seen how gold arrived at my target price I can form a new forecast. Words: 1078

The Gold (and Silver) bull continues to closely follow the giant wave formation of a tsunami.  The recent more parabolic rise in Gold up to above $1,900 is analogous to the little ridge of water we first saw way out in the distance, and now, much like when the waters recede from the shore early in the tsunami wave formation, Gold is undergoing a correction. Words: 1557

Goldrunner: a Gold & Silver Tsunami is Approaching – Fast! A tsunami doesn’t start with a bang, but with a whimper.  The first sign is a little hump in the water way out in the distance that is barely notable.  Anyone who catches a glimpse of it simply continues to expect the day to be the same as the last many days – calm and beautiful waters along the shore.  This is the point where we are, today in the Precious Metals sector. Many have seen the little roll of water out in the distance as Gold edged up in the first move of a more parabolic slope, yet most investors are mired in the same expectations of yesterday – a return for Gold to correct down into a lower base. Our analysis based on the fractal relationship to 1979  shows, however, that the mid 900s are a realistic target for the HUI by the end of the year or early in 2012; that $52 to $56 should be achievable for silver, with $58 to $62 as real possibilities; and that Gold should go the $2250 level followed by $2500 with the potential for $3,000, or a bit higher, now on the radar screen. Let me explain why that is the case. Words: 2130

A review of the gold price written by Robin Bew, chief economist at HSBC Bank, proposes that the gold price isin danger of entering bubble territory and predicts a sharp correction by year-end to $1,000 per troy ounce by 2013. [Let’s examine Bew’s views more closely.] Words: 725

When you just consider the downgrade of U.S. debt, the jobs problem, the housing situation, the European bankconcerns and their debt crisis, the negative outlook for the global economy, not to mention that the Fed will likely seek new measures to help the economy, we just don’t see gold coming down any time soon, other than having a normal downward correction [as currently is the case. Let us show you why.] Words:  1102