Who Holds the U.S. Debt – and How Much? Here's the Answer

As of the end of March, the federal government owed $14.27 trillion to a wide variety of holders of U.S. Treasury securities. The graphic below depicts who those creditors are and the amount they have bought in treasuries. All amounts are in billions of dollars. Words: 417

So says a report* from Congressional Quarterly (www.innovation.cq.com) which Lorimer Wilson, editor of www.munKNEE.com

(It’s all about Money!), has further edited ([  ]), abridged (…) and reformatted below  for the sake of clarity and brevity to ensure a fast and easy read. Please note that this paragraph must be included in any article re-posting to avoid copyright infringement. The article goes on to say: 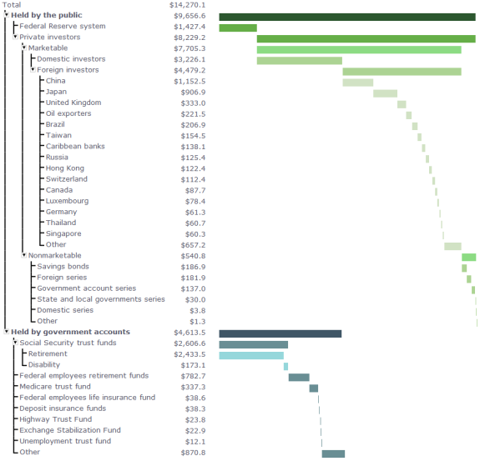 Treasury securities are the most sought-after in the world because the assumption that United States would always be able to repay its debts has generally gone unquestioned. That is why officials are negotiating to increase the government’s borrowing limit and avoid a default.

More than $9 trillion of the total debt is held by “the public” — a broad category that includes individual investors in the United States and overseas, the Federal Reserve system, and foreign governments and central banks. The remaining debt is held by government accounts, mostly trust funds established to collect dedicated revenue to pay for such programs as Social Security, Medicare and highway construction.

Countries listed under “foreign investors” indicate where Treasury securities are held. That does not mean that citizens, governments or central banks of that country own the securities. They may actually be owned by citizens or institutions from third countries that used the listed country for the purchase transaction.

Share
Previous A Look at Gold and Silver Beyond August 2nd
Next Forecast for House Prices is Horrific! Here’s Why (+2K Views)