Which Is A Better Investment Strategy For the Future – A S&P 500 Index Fund Or Individual Stocks?

Lorimer Wilson March 20, 2018 Comments Off on Which Is A Better Investment Strategy For the Future – A S&P 500 Index Fund Or Individual Stocks? 1,511 Views

companies included in the S&P 500 index, as well as discussing whether the S&P 500 should be considered as an active manager going forward, rather than a passive manager.

The Theory of Disruption in Business

The theory of disruption in business is that competition doesn’t only come from businesses who are in the same industry, but can also arise from completely different industries. One example of this is movie streaming disrupting movie renting stores and movie theaters.

The reason disruption is so heavily studied and has become a buzzword in investing is that it can come from seemingly nowhere…[to] take market share from established brands.

If you’re an investor, it might not be enough to just look at the competition. You need to look at how technology can destroy a business.

The chart below provides great clarity into the importance of disruption. 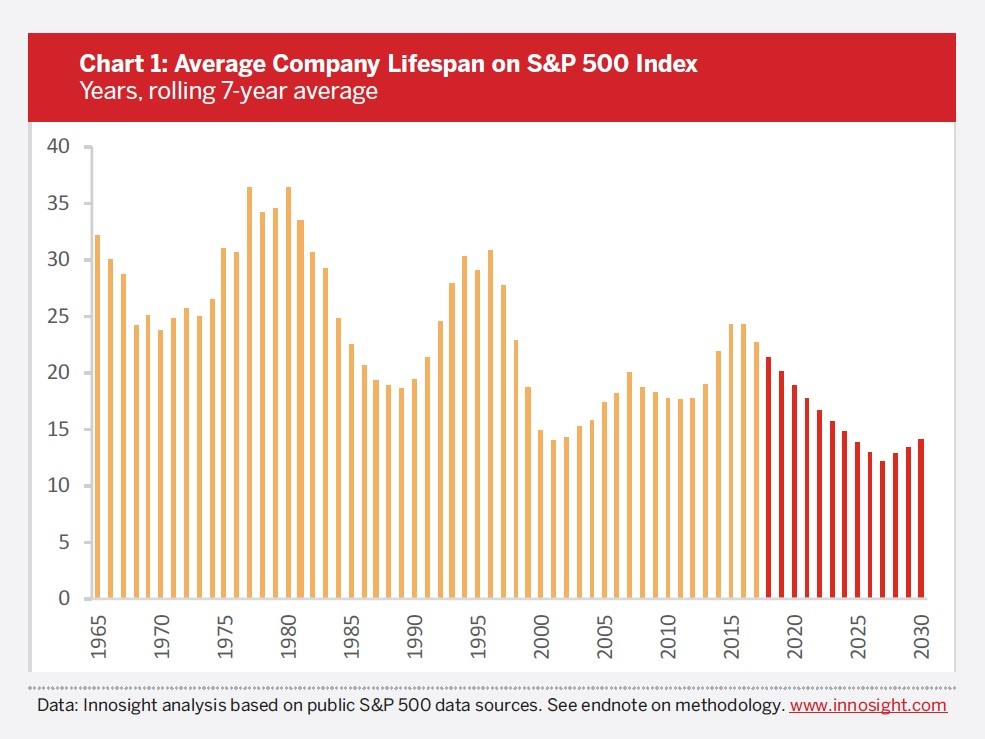 The lifespan of companies has been falling for a few decades. There are cyclical changes as more companies fail during recessions and less fail when times are good. However, let’s ignore those small changes and look at how the average company now only stays in the index for about 20 years instead of 30 years...

Who Exited, Who Entered

[The current churn rate of 5.2% does not include the announced private equity deals and mergers and acquisitions that have yet to close (Table 2).  As more companies are acquired or turn private, we are forecasting a decade of greater turnover in the S&P 500. Over the past five years alone, the companies that have been displaced from the S&P list include many iconic corporations (Table 1). 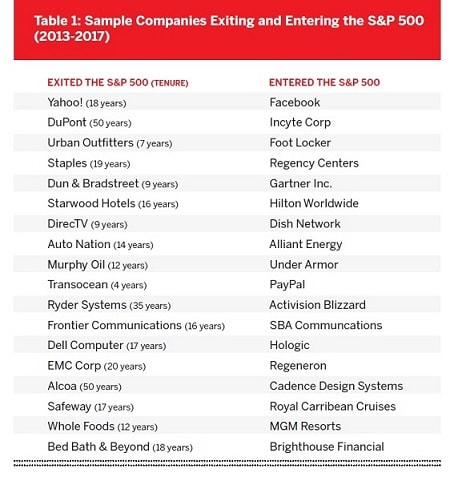 There are a variety of reasons why companies drop off the list:

At the current and forecasted turnover rate, the Innosight study shows that nearly 50% of the current S&P 500 will be replaced over the next ten years….Looking to the future, we expect turbulence to accelerate given factors such as the “unicorn” phenomenon of highly valued disruptive startups such as Uber and Airbnb, as well as intense M&A and private equity activity.] Source

Companies are gaining billion dollar market caps in less time than ever. For example, a small team consisting of only a few programmers can develop a game for mobile devices which successfully competes with mega corporations’ games which have taken millions of dollars and years to develop.

If the average S&P 500 company follows the projected path, then a company on average will only last about 10 years in the index. This makes it more difficult to invest because cash cow companies won’t be able to milk profits for as long. Either a company innovates or it’s out.

It’s important to recognize that just because the S&P 500 index has gone up over time, doesn’t mean stocks individually go up. The index has a huge survivorship bias, meaning it doesn’t include the losing companies.

Following Megatrends Could Be An Alternative To Stock Picking

Since investing in individual companies might become tougher because it’s difficult to see which firm will do the disrupting and which firm will be disrupted, investing based on long term themes could be a good idea.

The chart below provides an interesting list of mega-themes which are going to change the way firms do business. The chart plots the themes on a cycle based on which ones are mature and which ones are about to become prevalent. You can buy a group of stocks based on the incoming hype rather than the end game. For example, you could’ve bought cryptocurrencies in 2016 betting on the hype rather than trying to figure out what their value is during the later stage of the rally. 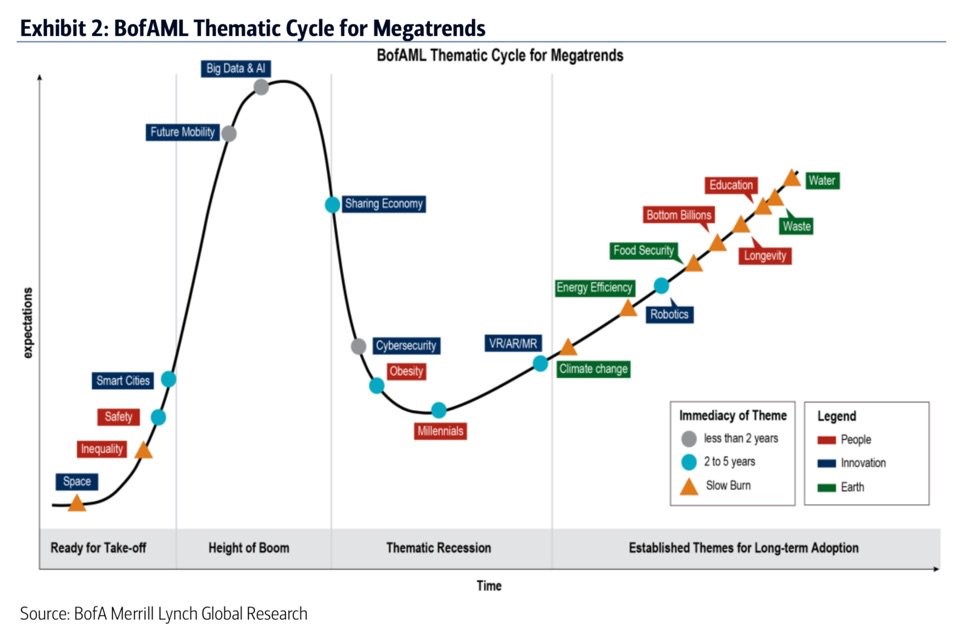 1. Comparison of Past & Present Performance of Dow Is Meaningless! Here’s Why

Every time the number of, or specific constituent, companies change in the Dow index any comparison of the new index value with the old index value is impossible to make with any validity whatsoever. It is like comparing the taste of a cocktail of fruits when the number of different fruits and their distinctive flavours – keep changing. Furthermore, because of the application of the ever changing Dow Divisor, we are always comparing a basket of today’s apples with a basket of yesterday’s pears.

Despite the quirky manner in which the DJIA is constructed, it tends to track the broader S&P 500 pretty well over time. This article lists the 30 Dow components and their individual weightings in the index and how the DJIA sector weightings compare with those of the S&P 500 index.

Do you know how to use the different stock indexes? The Dow, NASDAQ and S&P 500 indexes are 3 of the best measurements of trading activity and give investors a clear picture of the overall health of the economy. Each represents a different type of index, calculated and tracked in their own way, reporting real time movements of stock price and market capitalization. I created this infographic to demonstrate the unique features of these indexes and how they can help you along in investing.