Which Investments Are the Best Safe Havens In A Financial Crisis? (+3K Views)

Lorimer Wilson August 30, 2011 Comments Off on Which Investments Are the Best Safe Havens In A Financial Crisis? (+3K Views) 4,384 Views

As investors look for safe havens in a potential market panic, I am reminded of the adage, “In the land of the blind, the one-eyed man is king.”  Today, I see several metaphorical one-eyed men in this land of the blind that could serve as safe havens were there to be a market panic. All of them have significant flaws. In this post I would like to discuss them one by one. Words: 780

So says Cam Hui (humblestudentofthemarkets.blogspot.com) in an article* which Lorimer Wilson, editor of www.munKNEE.com (Your Key to Making Money!), has further edited ([  ]), abridged (…) and reformatted below  for the sake of clarity and brevity to ensure a fast and easy read. The author’s views and conclusions are unaltered and no personal comments have been included to maintain the integrity of the original article. Please note that this paragraph must be included in any article re-posting to avoid copyright infringement.

Hui goes on to say, in part:

1. US Treasury Bonds
US Treasuries remain my favorite safe haven play and they have significant upside potential in the event of a market meltdown.

My reservation about Treasury bonds is that the U.S. has long-term fiscal problems. In such a case, can bonds be really a safe haven?

2. Gold
The price of gold has been on a tear since the market bottomed in March 2009.

Gold stocks staged an upside breakout to all-time highs last Friday which I interpret as being bullish for bullion. Longer term, I still favor holding gold over gold stocks.

My principal reservation about gold is that it generally hasn’t held up well in a market panic. It didn’t during the Lehman Crisis of 2008. It sold off during the mini-panic earlier this year after the Japanese earthquake.

Despite what the gold-bugs say, gold and commodities have traditionally been part of the “risk-on” trade. In a “risk-off” market panic, risk managers and margin clerks control the market. They demand that traders and investors liquidate positions in order to meet their risk criteria and meet margin calls on all of their positions. That’s why correlations converge to 1 during these market selloff episodes. One sign that I would watch for as a “tell” of a “margin clerk market” might be that gold stocks will de-couple from the price of gold. While gold may go up as a safe haven during such an episode, gold stocks may sell off because the risk managers regard them as stocks first and gold the alternative currency second.

In the current environment, [however,] I am inclined to give gold the benefit of the doubt as a safe haven given its recent history of rising during this period of fear. I would not be inclined, however, to give the same benefit of doubt to other hard asset commodities. If there were to be a market selloff because of the fear of a recession or a banking crisis which would plunge the world into a global recession, don’t you think that global demand for copper, oil and other economically sensitive commodities would fall as well?

3. Swiss Franc
The “Swissie” has been rising in the current environment of fear. As the chart below shows, CHF has been in a well-defined uptrend.

My reservations about the Swiss one-eyed man is twofold: it didn’t serve well as a safe haven during the crisis in 2008 and, were Europe to blow up because of a banking crisis, does anyone really think that the Swiss banks won’t escape collateral damage? Just look at this chart of Swiss bank asset to home country GDP exposure. 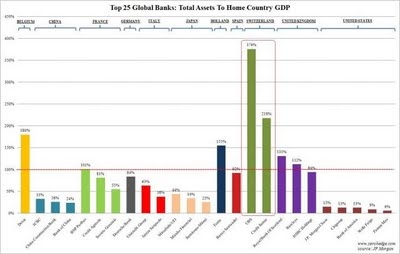 We want a vehicle that will hold up well in a market meltdown. The CHF strikes out in my book.

And the winners are…
The two vehicles [that would best serve] as safe havens in a crisis, in order of preference, are: