Lorimer Wilson December 14, 2014 Comments Off on When the Bubble Bursts It Will Cause Deflation & Drive Widespread Social Unrest – Here’s Why (+3K Views) 3,121 Views

accompanied by increasing public and private debt? Are we borrowing just to stay alive? [As I see it,] national governments will increase national debt loads in order to stay in power until one or more of them default. Then their will be financial panic which will most certainly be deflationary. Here’s why.


So writes Ronald R. Cooke (tceconomist.blogspot.ca) going on to say:

According to the OECD:

As shown in the following graph,

There is NO credible plan to pay off these debts. The bubble just keeps getting larger, and larger…. 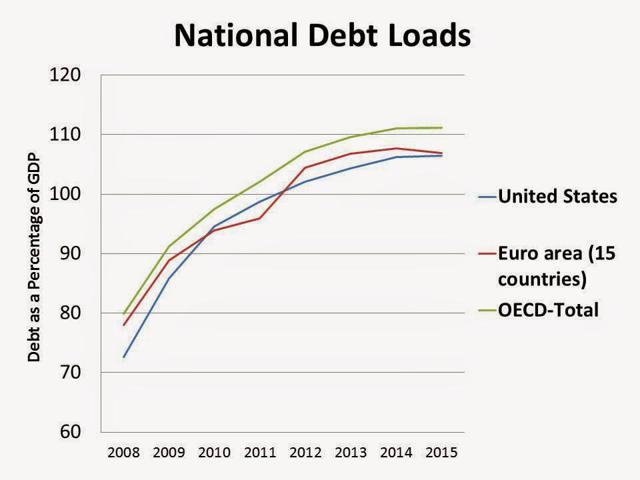 We don’t know how long it will take for this scenario to play out but if the world economy unravels, then:

The International Monetary Fund (IMF) has recently forecast World GDP to increase by 3.8% in 2015. GDP is expected to increase by:

but this scenario appears to be optimistic. In order to sustain a stable economy through 2015, we have to assume:

BUT, since liberal economic and social philosophy dominates OECD national political agendas, we can expect liberal financial solutions will be imposed to solve OECD financial problems and this ideology is:

Do your own homework and then judge for yourself.


The above post is presented compliments of www.munKNEE.com and may have been edited ([ ]), abridged (…) and/or reformatted (some sub-titles and bold/italics emphases) for the sake of clarity and brevity to ensure a fast and easy read. The author’s views and conclusions are unaltered and no personal comments have been included to maintain the integrity of the original article. Please note that this paragraph must be included in any article re-posting to avoid copyright infringement.

The central bankers of the world have painted themselves into corner. Growing mountain of debt makes it harder for economies to grow at higher interest rates, hence forcing central banks into a downward spiral of record low rates and monetary stimulus that simply encourages more borrowing and worsening the underlying problem – what the BIS calls “a debt trap” END_OF_DOCUMENT_TOKEN_TO_BE_REPLACED

We’re doomed! Even if the economy were growing at a faster pace, it wouldn’t come close to offsetting the interest payments on our ever-expanding debt. As such, any sort of credit shock – either rising rates or a decline in the rate of debt expansion – will cause the system to implode. Let me explain why that is the case. END_OF_DOCUMENT_TOKEN_TO_BE_REPLACED

The next time someone says, “The U.S. is the richest country on Earth” correct them and state that “The U.S. is the most bankrupt and indebted country in the history of the world” because that’s reality. Let me explain. END_OF_DOCUMENT_TOKEN_TO_BE_REPLACED

There is too much debt. Debt works the same way for a country as it works for an individual or a family, which is to say if you borrow too much, then your life basically craters. Everything gets harder to do, and you end up doing things in order to deal with your past mistakes that you would never do normally. You start trying absolutely crazy things, and that’s where the world’s governments are right now. We are doing all these things that are essentially con games and getting away with it so far, because a printing press is a great tool for fooling people. I don’t see how we can get away with it too much longer. END_OF_DOCUMENT_TOKEN_TO_BE_REPLACED

5. Inflation or Deflation: Are We Approaching the Tipping Point?

Might our Inflation-Deflation Watch be suggesting a breakout in asset price inflation is about to take place? Could it, in fact, be presaging the start of John William’s hyper inflationary depression in which prices rise exponentially even in light of massive unemployment and bankruptcies? This article analyzes the situation. END_OF_DOCUMENT_TOKEN_TO_BE_REPLACED

At the end of last year virtually every every single economist expected interest rates to rise this year as the Fed tapered their purchases and the economy improved but, in fact, interest rates on the 10 year U.S. Treasury have been going down year to date (from 3% to 2.5% after rising from about 1.6% to 3% last year). The masses, going along with this crowd, got fooled but we have been calling for a decline in interest rates for some time now due to world-wide deflation and it couldn’t be clearer to us that this is the most likely scenario for the United States. Let us explain. END_OF_DOCUMENT_TOKEN_TO_BE_REPLACED

7. Now Underway: A Spiral of Debt Deflation Into a Bottomless Economic Abyss!

von Mises once said, “There is no means of avoiding the final collapse of a boom brought about by credit expansion. The alternative is only whether the crisis should come sooner as the result of a voluntary abandonment of further credit expansion, or later, as a final and total catastrophe of the currency involved” and just that is happening before our very eyes. Words: 2242 END_OF_DOCUMENT_TOKEN_TO_BE_REPLACED

8. Risk for the Economy is Deflation, NOT Inflation

Presently, the federal government is increasing spending that in the end may actually retard economic activity, and is also proposing tax increases that will further restrain private sector growth. In other words, fiscal policy is executing a program that is 180 degrees opposite from what it should be to stimulate the economy. How is it possible to get an inflationary cocktail out of deflationary ingredients? Words: 1461 END_OF_DOCUMENT_TOKEN_TO_BE_REPLACED

9. Deflationary Pressures In Economy Are Primary Concern of the Fed

Despite the Fed’s recent communications that they are planning to “taper” the current monetary program by the end of this year – the index is suggesting that their interventions, in one form or another, are unlikely to end anytime soon. The threat of “deflation” remains the Fed’s primary concern. END_OF_DOCUMENT_TOKEN_TO_BE_REPLACED

10. Deflation: What You Need to Know (and Fear) & How to Prepare for Such an Eventuality

All in all, deflation should be one of the most serious words in a commodity investor’s vocabulary and is something to always keep an eye on. While its presence may seem removed from our economy, the possibility always remains and preparation will be key to survive a deflationary environment. END_OF_DOCUMENT_TOKEN_TO_BE_REPLACED

Are we headed for rampant inflation or crippling deflation? I believe that we will see both. The next major financial panic will cause a substantial deflationary wave first, and after that we will see unprecedented inflation as the central bankers and our politicians respond to the financial crisis. [Let me explain why I think that will unfold.] Words: 1025 Charts: 3 END_OF_DOCUMENT_TOKEN_TO_BE_REPLACED

Share
Previous You Should Be Terrified! U.S. Is In A Debt Trap & Oblivious to the Consequences
Next Is “Buy & Hold” the Way to Go?