Timing Is Everything When Assessing the Future Price of Gold

Lorimer Wilson April 5, 2011 Comments Off on Timing Is Everything When Assessing the Future Price of Gold 2,042 Views

So says Marco G. (http://goombarhsedge.blogspot.com/) in an article* which Lorimer Wilson, editor of www.munKNEE.com,  has further edited ([  ]), abridged (…) and reformatted below  for the sake of clarity and brevity to ensure a fast and easy read. Please note that this paragraph must be included in any article re-posting to avoid copyright infringement.

Marco goes on to say:

A review of [recent] history…. [shows that] there seems to be 6 definite phases that…gold prices move through during the year… [according to] the following chart [over the past] two years of daily closing prices: 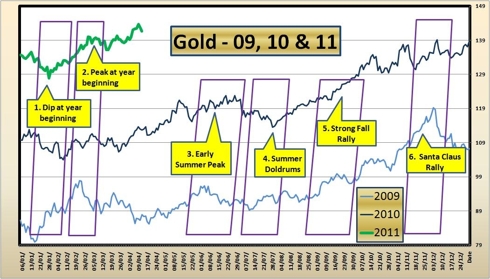 (The author did not use 2008, as the economic disruptions at that time may give unreliable data. Also the years prior to 2008 were not used as the author believes the world changes with time and the economic drivers back then may have changed too much for any relevance to 2011.)

Examining the chart [above], one can definitely pick out the phases that the gold price seems to go through during a yearly cycle. Following are the ascertained phases with a brief description for each:

Phase #1: Dip at Beginning of Year

After the gains in the usual strong fall season gold prices seem to take a dip at the beginning of the new year. Perhaps it is just to take a breather or to consolidate a while before starting to rise again, possibly in conjunction with the coming of the lunar New Year for Asian countries. Note that the phases do not have a definite start and end date but [, rather,] a loose correlation from year to year.

After the dip at the start of the new year there appears to be a gold price peak that follows relatively soon (within one month of the dip). Then there is indecision, as the gold price meanders up and down, akin to what is happening currently. Some pundits are calling for a fall and others for a further rise. There is no definitive action.

Then a bit later, toward the end of spring, the gold price seems to take a final push upward before resting for the summer. This peak is not very strong and may not be a long period of advance – it may not even be higher than the previous peak as in 2009. It is merely a last push upward before the summer’s onset.

Summer is usually when the gold price takes a rest. In 2009, the rest for gold was almost 3 months long. In 2010, Gold did not take barely a month’s rest, before in late July, it started rising in the annual fall rally.

Fall is the strong season for the gold price. The price rises are long and strong, lasting almost until the new year. In both 2009 and 2010, major gains for the gold price were made in this fall rally. Toward the end of October and early November, there may be a small dip in the Gold price. This may be attributed to the annual portfolio rebalancing that major funds perform.

Finally in late November and early December, there is usually a Santa Claus rally. This caps the year for the gold price rises making gold investors a jolly ol’ group.

My Prediction of Gold Price Gains for 2011

Using the above information on the chart and examining the historical data that gives percentage gains of about 25% in 2009 and 29% for 2010, the author calls for between a 30% to 35% gain this year for the gold price. This will equate to a range for the gold price to end 2011 at from $1847 to $1918 in USD. This forecast is nowhere near scientific and it is merely an educated guess [but, surprisingly, it is right in the ballpark according to the fractal technical analysis of Goldrunner as discussed here ($1860) and here ($1975)].

Share
Previous Relax! Defaulting on Debt Is Not an "End of the World" Scenario
Next $5,000 Gold: Who's Missing From This List of Peak Price Prognosticators?