What is the Primary Reason for Lack of Economic Growth in America? Here is the Answer

Lorimer Wilson September 21, 2011 Comments Off on What is the Primary Reason for Lack of Economic Growth in America? Here is the Answer 2,532 Views

The widespread stagnation in wages, rather than the level of unemployment, may offer a better explanation for the 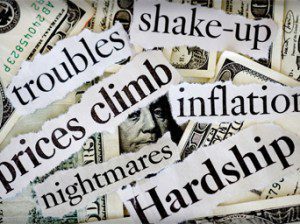 failure of economic growth to accelerate two years after the end of the recession. Workers’ ability to negotiate higher earnings won’t return until the job market strengthens, and flagging confidence has raised the risk that consumers may retrench. [Let us explain.] Words: 1018

So say Sho Chandra and Steve Matthews in an article* posted at www.bloomberg.com which Lorimer Wilson, editor of www.munKNEE.com (Your Key to Making Money!) has paraphrased, edited, abridged and reformatted to make for a fast and easy read. The author’s views and conclusions are unaltered and no personal comments have been included to maintain the integrity of the original article. Please note that this paragraph must be included in any article re-posting to avoid copyright infringement.

The article goes on to convey that:

The widespread stagnation in wages, rather than the level of unemployment, may offer a better explanation for the failure of economic growth to accelerate two years after the end of the recession. Workers’ ability to negotiate higher earnings won’t return until the job market strengthens, and flagging confidence has raised the risk that consumers may retrench.

“Those who are employed are worried about their income and are seeing real purchasing power get squeezed, therefore they’re set to retrench a bit,” said Julia Coronado, chief economist for North America at BNP Paribas in New York. “That’s the danger right now. It means the recovery remains very fragile.”

“The biggest issue is that labor income is soft at a time when we’re getting no offset” from other sources, said Michael Feroli, chief U.S. economist at JPMorgan Chase & Co. in New York going on to say that, unlike in the early part of the recovery, stock-market losses are eroding wealth and home prices continue to decline; that support from the government may shrink if Congress fails to extend payroll-tax cuts and unemployment benefits set to expire at the end of the year; that limited access to borrowing means Americans have few means to fund their purchases. “It’s hard to see where consumers are going to get a lot of wherewithal to sustain strong spending,” he said. “It’s certainly a concern that, rather than sluggish consumption growth, we see flat or declining consumption.”

“The painfully high unemployment rate is consistent with considerable slack or excess capacity in the economy, which tends to constrain wage growth,” said Federal Reserve Bank of Atlanta President Dennis Lockhart in a recent speech. “You are familiar with the term wage-price spiral. I don’t see any prospect of such a development in the foreseeable future, as long as unemployment remains high and longer-term inflation expectations remain well-anchored,” he said.

The worsening outlook for incomes will cause “continued pressure on home prices and on the stock market,” said Malcolm Polley, who oversees $1 billion as chief investment officer at Stewart Capital in Indiana, Pennsylvania. Corporate sales may be hurt as demand cools, and there may be more withdrawals from retirement plans and higher use of 401(k) loans. In addition, sales at some luxury stores may be hurt because “at the margin, the upper end of the middle class will probably feel less inclined to spend extra money,” he said. Chains catering to “the lower end of the earnings totem pole,” discounters including may fare better as shoppers trade down. “Perception is reality from the standpoint of consumers and investors,” Polley said. “We need people to start feeling good about themselves.”

“The economy isn’t growing fast enough to boost job growth to increase incomes,” said Omair Sharif, an economist at RBS Securities LLC in Stamford, Connecticut. “Most workers don’t have a lot of sway in demanding higher wages unless they have very specialized skills.” Employees cannot hope for more bargaining power anytime soon, said Harry Holzer, a professor of public policy at Georgetown University in Washington and former chief economist at the Labor Department. Through August, the U.S. had recovered only about 1.89 million of the 8.75 million jobs lost as a result of the recession. “There is so much slack, it will keep earnings from rising very much,” he said. “It will take most of this decade” to repair the damage “unless there is a big spurt in hiring.”

Chris G. Christopher, senior principal economist at IHS Global Insight in Lexington, Massachusetts sums up the concensus view that: until people see their wages or the labor market get better, they will be “spending on necessities, not desires,” and that will curtail and hamper the economic growth of the nation.