Right now, interest rates are near historic lows.  The U.S. government is able to borrow gigantic mountains of money for next to nothing.  U.S. consumers are still able to get home loans, car loans and student loans at ridiculously low interest rates.

So says Michael Snyder from TheEconomicCollapseBlog.com in edited excerpts from an article* which Lorimer Wilson, editor of munKNEE.com  (It’s all about Money!), has further edited ([  ]), abridged (…) and reformatted below  for the sake of clarity and brevity to ensure a fast and easy read. Please note that this paragraph must be included in any article re-posting to avoid copyright infringement. Snyder goes on to say:

The only reason that U.S. government finances have not fallen apart completely already is because the federal government is still able to borrow huge amounts of money very cheaply.  If interest rates on U.S. government debt even return just to “average” levels, it is going to be absolutely catastrophic…a complete and total collapse. 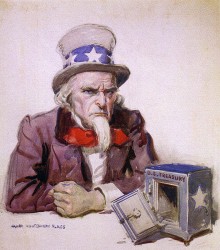 In 2010, the U.S. government paid out just $413 billion in interest at an average rate for the year of approx. 3% even though the national debt soared to 14 trillion dollars by the end of the year… Considering how rapidly the U.S. dollar has been declining and how much money printing the Federal Reserve has been doing, a rate of interest that low is absolutely ridiculous.

The Federal Reserve has been playing all kinds of games in an attempt to keep interest rates on U.S. government debt low, and so far they have been pretty successful at it but they aren’t going to be able to do it forever.

The shorter the term, the more ridiculous the rates of interest on U.S. Treasuries are – and the rate of interest on 3 month U.S. Treasuries right now is just barely above zero. [As such,] most U.S. government debt is financed in the short-term these days [because they can reduce their borrowing costs substantially by doing so]. In fact, the U.S. government issues a higher percentage of short-term debt than any other industrialized nation… [As such,] the U.S. government constantly has huge amounts of debt that are maturing and that need to be rolled over. This is great as long as interest rates stay very, very low but when interest rates rise the whole game will change.

In a recent article, Pat Buchanan explained that the Obama administration is being completely unrealistic when it assumes that interest rates on U.S. government debt will stay incredibly low over the next decade….

“The average rate of interest the Fed has had to pay to borrow for the last two decades has been 5.7 percent. However, President Obama is projecting the cost of money at only 2.5 percent. A return to the normal Fed rate would, by 2020, add $4.9 trillion to the cumulative deficit”

Most Americans really cannot grasp how incredibly low interest rates are right now. Sometimes a picture is worth a thousand words. The following chart shows how interest rates on 10 year U.S. Treasury bonds have declined over the last several decades. 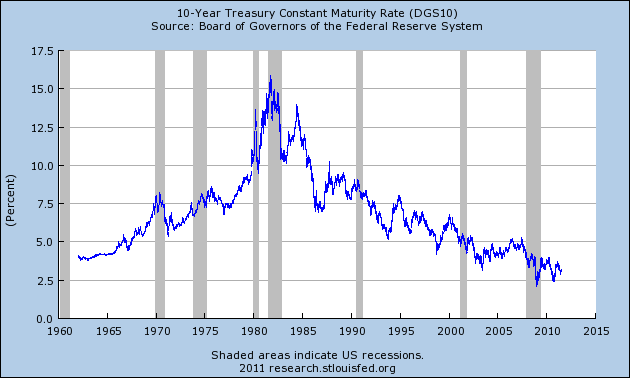 As confidence in the U.S. dollar and in U.S. government debt declines, interest rates will go up and, in fact, there are troubling signs that we are starting to see a move in that direction right now.  Last week, the yield on 5 year U.S. Treasuries experienced the biggest one week percentage jump ever recorded – and the big danger is that the political wrangling in Washington D.C. will start to cause a panic.

The managing director of Standard & Poor’s recently told Reuters that if the U.S. government starts defaulting on debt at the beginning of August, the credit rating on U.S. Treasury bonds that are supposed to mature on August 4th will go from AAA all the way down to D… When a credit rating gets slashed, interest rates on that debt can go up dramatically. Just ask the citizens of Greece. Today, the interest rate on 2 year Greek bonds is over 26 percent. [Frankly,] you are delusional if you believe that something like that can never happen here.

Right now the U.S. national debt is completely and totally out of control.  If the U.S. government had to start paying interest rates of 10, 15 or 20 percent to borrow money it would be a total nightmare. In future years the U.S. government will be spending a $1.0 – 1.5 trillion just on interest on the national debt so how in the world is it going to be possible to even run the government, much less balance the budget? 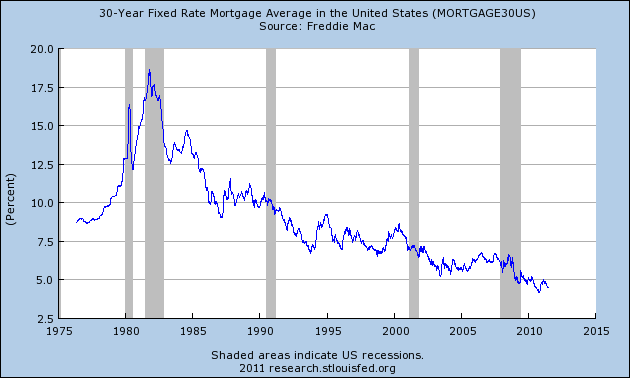 Keep in mind that even with such ridiculously low interest rates the U.S. real estate market has been deader than a doornail so what would a significant spike in interest rates do to it? [Well, it] would wipe out U.S. government finances, it would push state and local governments all over the country to the brink of bankruptcy, it would bring economic activity to a standstill and it would destroy any hopes for a housing recovery.

This country, and in particular the federal government, is enslaved to debt but right now we are not feeling the full pain of that debt because interest rates are so low. If you want to know when things are really going to start coming apart, just keep an eye on interest rates.  When they really start spiking you can start sounding the alarm.

The truth is that the state of the economy is going to continue to get worse.  Our debt is growing every single day and our country is getting poorer every single day.  When interest rates start surging it is going to start knocking over a lot of dominoes.

I hope you are getting prepared for when that happens.