Watch Out: Gold NOW Prone to a Collapse! Here's Why

Lorimer Wilson September 9, 2011 Comments Off on Watch Out: Gold NOW Prone to a Collapse! Here's Why 1,914 Views

Attention on the gold market has reached a fever pitch, with almost every commentator stating their love for the metal’s currency and sociopolitical hedging attributes. However, we believe the risk in holding gold has now reached unacceptable levels, and it is now prone to a collapse. [Let us explain.] Words: 1790

So says Ananthan Thangavel  (www.lakshmi-capital.com/) in an article* written for SeekingAlpha.com which Lorimer Wilson, editor of www.munKNEE.com (Your Key to Making Money!), has further edited ([  ]), abridged (…) and reformatted below  for the sake of clarity and brevity to ensure a fast and easy read. The author’s views and conclusions are unaltered and no personal comments have been included to maintain the integrity of the original article. Please note that this paragraph must be included in any article re-posting to avoid copyright infringement.

Thangavel goes on, in part, to say:

[As we see it] precious metal…assets are no longer hedges, but instruments of pure speculation favored by leveraged and momentum traders…When assets climb a “wall of worry” surrounding their advance, it is a very good sign that the trend will continue. By contrast, when most everyone is bullish on an asset, there is a good chance that prices are headed for a precipitous fall [and] gauging market sentiment today on gold yields [the following] alarming observations.

Turning on CNBC, the permanent ticker at the bottom-right of the screen now displays Dow, S&P 500, Nasdaq and gold quotes in repeating, alternating fashion. For gold to be getting the same degree of attention as the S&P 500 is astounding, and a very bad sign for gold bulls. Even more striking is the attention commentators are giving gold. CNBC mentions gold about 10 times every 10 minutes, and they have even started a full-day, recurring special called “Gold Rush” to draw even more attention to the market, gold miners and end users. This is the exact opposite market sentiment that we viewed last January.

With everyone in the investing public being inundated with pro-gold commentary, who is there left to buy? Bulls point to India and China, but even emerging market demand is not without bounds. For poorer, non-leveraged buyers such as emerging market consumers, price affects demand. If a Chinese consumer is putting away $1,000/month into gold and silver, the amount of the metal they buy decreases as price increases, thereby eventually causing demand for gold to fall and price correcting lower. By contrast, futures traders control 100 ounces of gold with $9,450 in initial margin regardless of the price of gold.

The stark difference between physical gold buyers and futures traders is evidenced in the recent volatility of precious metals prices. This type of volatility, even when associated with upward movements, is not a good sign for long holders, and is indicative of the risk inherent in holding precious metals at this time. 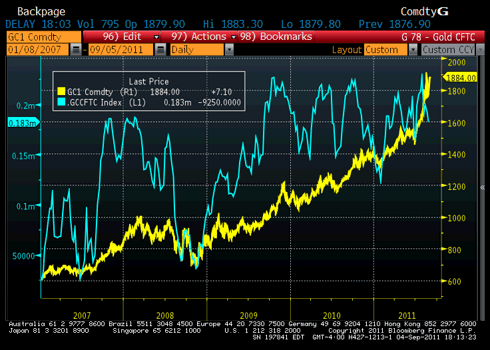 As can be seen, Managed Money net longs actually decreased in the week ending August 30th. However, as we have previously stated, this is not necessarily bullish for gold, as we saw a very similar pattern play out in silver, as silver rocketed higher in April even with Managed Money ditching their net long positions.

Retail buyers through the GLD and other ETFs seem to be doing quite a bit of buying, supporting gold prices on a week when futures volume was markedly lower than the last few weeks. This participation by retail is concerning, as retail investors are almost always the last ones to find out about a legitimate investment trend, and then push that trend to the bubble limit (think real estate in 2006 or tech stocks in 2000).

Gold’s bull market has been fueled by currency debasement. Shown below is a chart comparing the price advance of gold since 2000 to the size of the Fed’s balance sheet. The chart is normalized for percentage. 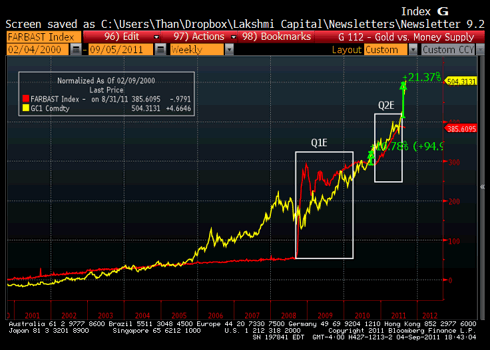 These two data points correlate remarkably well, and their interrelation is no coincidence. As the Fed has embarked on more and more aggressive monetary easing policies, pushing the size of their balance sheet to unprecedented levels, investors have increasingly turned to gold. While the government claims they support strong dollar policy, it is quite evident to even a casual observer that the Fed would prefer a weaker dollar to stimulate exports and breathe some artificial life into the US manufacturing sector. Such conditions have caused a bull market in gold, and rightfully so.

In summer 2010, gold investors correctly anticipated an increase in size in the Fed’s balance sheet, buying up the metal right before and during QE2. Between the time Bernanke hinted at QE2 in Jackson Hole in 2010 and the time QE2 actually began, gold rose 11%. This time around, the anticipatory buying of gold has been enormous, pushing up gold 13% in August, and an astounding 21% since QE2 ended, even though no announcement of QE3 has even been hinted at. If buyers are disappointed with the Fed’s eventual actions, gold prices could snap lower in a hurry.

Current developments regarding monetary policy have changed the likely outcome markedly, while precious metals investors’ sentiment has diverged wildly in the opposite direction. As we discussed above, we believe that the prospects for further quantitative easing are extremely bad, given the political challenges as well as the aversion towards excessive inflation that the Fed has recently commented on. However, precious metals investors have taken any hint of support for QE3 from the FOMC and any stock market decline as reason to bid precious metals to ever-higher heights, perceiving that an equity market decline or a simple statement that an FOMC governor would be open to QE3 means that it is a foregone conclusion. We believe the market’s belief in prospects for QE3 is now bordering on delusional.

5. Equities Not Negatively Correlated to Gold

Furthermore, the market has failed to follow this negative correlation with equities on the downside. This past week, equities saw gains over the first three days, spearheaded by gains in European shares. However, gold and silver remained flat or even higher, refusing to budge lower even in the face of good economic or equity news. While short-term traders could rightfully interpret this as a sign of voracious demand for precious metals, we believe that it is a sign of a euphoric top in gold nearing, and that long holders should be extremely cautious at these levels.

While there is no limit to how far this bubble can be pushed, we do believe the current market sentiment and price action of precious metals indicates a bubble mentality. It is with great disappointment that we say this, as we have been one of the staunchest supporters of precious metals as an investment, but we believe we may be nearing the end of the gold bull market.

The wrong people are buying gold for the wrong reasons. Everyone from mom and pop investors to professional traders are buying gold to hedge their equity portfolios, and they could be sorely disappointed if the hedge itself fails. While it is true that negative real interest rates do mark general periods of bull markets in precious metals, it is also true that precious metals are the most vulnerable assets to changes in market sentiment, and a large fall from current prices could permanently alter market perception towards precious metals as a hedge.

While assets such as tech stocks in 2000 or real estate in 2006 underwent huge drops in price, most of these assets were worth something, albeit a fraction of their previous price. The problem for the precious metals market is that with gold’s average cost of production around $500/ounce (or in many cases lower), and silver less than $10/ounce, these precious metals are only worth literally what the next guy will pay for them. If, at some point, market sentiment does turn on these metals, the fall will be quick, brutal and possibly permanent.

With market sentiment at extreme overbought levels, even a small downward turn in sentiment could cause a huge fall in price, with gold possibly correcting 15-20% lower. While no market prognosticator can come up with a reason for why this might happen, when people cannot identify any way an asset’s price can fall is exactly when a fall is ripe to occur.

The market now fears not being in precious metals, and perceives them to be the best and only hedge in the current market. As Nassim Taleb said, the market tends to hurt the largest number of hedgers, and we believe this case will prove no different.

We believe maintaining a neutral stance on gold at this time is a prudent posture. We would look to establish short exposure on a sustained crack in prices, but with current gold volatility at an all-time high, such a position is risky. Unfortunately, shorting hysteria is ten times as difficult as buying fear, and picking an entry and exit point on a short gold trade is very difficult. However, as the September Fed meeting approaches, the gold market should begin pricing in the reduced chance of quantitative easing, and prices should begin to fall, possibly using the catalyst of the Fed’s September statement.

1.  These 5 Situations Would Put An End To The Gold Bull Market

With gold’s ever increasing price and all of the bullishness out there today [I have identified] 5 different situations that would cause the gold trade to unwind. Two are more of the short-term correction variety, while three are more of the long-term new bear market type. [Let me explain.] Words: 831

A review of the gold price written by Robin Bew, chief economist at HSBC Bank, proposes that the gold price is in danger of entering bubble territory and predicts a sharp correction by year-end and reach $1,000 per troy ounce by 2013. [Let’s examine Bew’s views more closely.] Words: 725

While investors are piling into gold [a number of] independent international financial consultancies are suggesting that now is the time to be getting out of the gold market. [Here are their views.] Words: 897