Venezuela Default Looms: Will China Save It?

Lorimer Wilson July 31, 2016 Comments Off on Venezuela Default Looms: Will China Save It? 1,936 Views

IMF. General Mills, Bridgestone, Coca-Cola, Kimberly-Clark, Aeromexico, Lufthansa and LATAM Airlines have all suspended operations there in the past year.  Upcoming debt payments are significant, and the country will most likely default as early as November of this year and no later than April of next year. International reserves are simply insufficient at a time when oil production declines and the economy contracts. Two questions in the air: Will China save Venezuela? Will it demand Maduro step down?

The comments above and below are excerpts from an article by LatAmPm.com which has been edited ([ ]) and abridged (…) to provide a faster and easier read.

Food scarcity, insecurity and the people’s willingness to have a recall referendum to end Maduro’s presidency have increased street protests 24% y/y in the first six months of this year, with an average of 19 protests per day as of June. 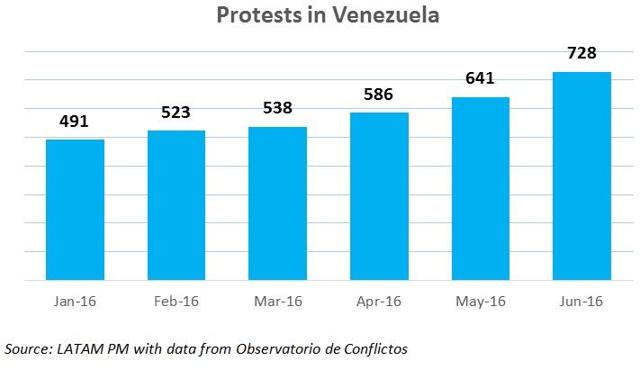 Political risk is also increasing as clashes between Maduro and the National Assembly continue. The legislative – controlled by the opposition – is moving forward to reinstate three deputies the Supreme Court removed in January, which would restore the two-thirds super-majority in Congress. It is also preparing to appoint new Supreme Court judges, after it voted to remove 13 of the 32 Court members.

Maduro’s administration is already saying that if deputies are reinstated, they would end in jail. Maduro himself has threatened to abolish Congress for overextending its powers. He must be also aware that a move to dissolve the National Assembly could trigger acute social unrest.

In the meantime, Maduro keeps giving the military more power. He gave Venezuela’s armed forces the control of food rationing, after he even created a military oil company earlier this year. Defense Minister Padrino Lopez is now second in command, which extends the military grip over the South American nation.

The problem is that in order to serve its external debt, Venezuela has to cut imports, which supply most of its food, to save the dollars that come from oil sales. The military will have problems controlling food if it is scarce, and this is why they have recently resorted to reopening the border with Colombia, originally closed to prevent smuggling of subsidized goods.

Nearly 40,000 Venezuelans cross over to its neighboring Colombia every time the military opens the border. This time was no exception. The magnitude of the potential crisis must be causing concern to other South American countries.

Even the strong willingness to pay and the effort to cut imports will not be enough for the Venezuelan government to service its debt. Venezuela is defaulting its bondholders. Upcoming debt payments are significant, and if Maduro’s administration is not defaulting in November, it will do it in April. International reserves are simply insufficient, at $11.8 billion, at a time when oil production declines and the economy contracts. 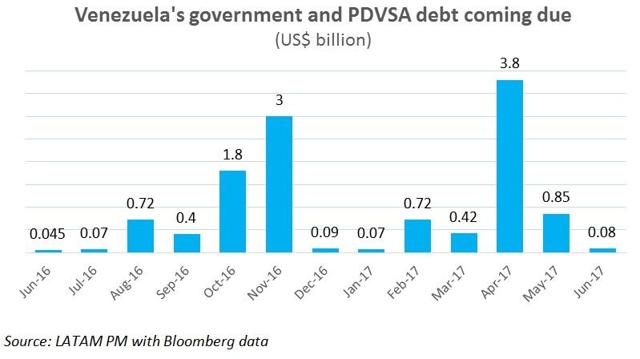 According to OPEC’s monthly monitor, oil production in the country with the largest proven reserves on Earth is falling in the order of hundreds of thousands of barrels a day month to month and reached 2.36 Mbpd in June. Moreover, the IMF just revised its forecast for Venezuela’s economic growth this week. According to the multilateral organization, economic activity will fall 10% in 2016 – not 8%, as previously stated – but even the double-digit negative growth might fall short for an economy in which price controls let it produce less than 10 cars a day.

Citibank (NYSE:C), a vital financial institution in Venezuela’s financing scheme, also announced that it is closing governmental accounts that have served as a liaison between government vault and private clients. Maduro’s government has to find a substitute quickly if it wants to import any food.

Venezuela keeps walking towards default. It is defaulting to both its bondholders and its people as the economic situation continues to deteriorate and conflict intensifies at both the institutional and street levels.

LATAM PM’s Take: Venezuela’s default is closer than ever before. It can happen in November or April, unless China actively prevents that from happening. In any case, Maduro would likely have to step down as an exchange for any favors coming from abroad and…this can have a spillover effect in a fragile South American context.

There are not figures for the loss of human capital, but it is not difficult to suspect the country’s economy will also suffer in the future because the government is also defaulting its youth. An entire generation of highly skilled human capital has already gone to Miami, Quito, Panama, Bogota, New York or somewhere in Europe.

Share
Previous An Unsettling Look At the Unprecedented Risks the World Is Facing
Next How Much Do Fees Affect Active Vs. Passive Investing (+2K Views)