Upside For Silver Is Fantastic – Here’s Why

I am increasingly bullish on the prospects for silver, for the following three primary reasons:

While much of this new money remains trapped in the banking system, a meaningful portion finds its way into the markets.

I could show dozens of graphs showing a collapse in GDP, industrial production, sentiment and economic activity. Instead, I’ll show just one: The Employment-Population Ratio.

While it has been deteriorating since its 2000 peak, the number of employed people as a percent of the total U.S. population has utterly collapsed almost overnight.

Today, each working person must cover the entitlements of one non-working person and this results in enormous long-term shortfalls.

Since it is politically unpalatable to cut entitlements, it is very likely debt expansion – and thus the monetary expansion – continues unabated. It must, or the political and social system collapses under its own weight.

2. Inflation on the Horizon

The one card holding up the house is massive government and Fed intervention. In the end, perhaps CPI numbers might not show actual deflation. Nevertheless, the pressures are immense.

The world is in the early stages of a new experiment to help support the economy: helicopter money…and, given the poor history of reversing stimulus, it can reasonably be assumed that any form of helicopter money might never end, [after all,] which elected official will be the one to tell the voting public he’s taking away their monthly allowance? That doesn’t sound like a ticket to the White House…

Free money directly into the hands of Americans might create the inflation that central banks never could, because the middle man (i.e. banking system) is removed. Helicopter money is a direct infusion of money into the economy. This has inflationary implications, which is beneficial for real assets like silver.

Previously, American companies off-shored and out-sourced production to China because it was far cheaper…[we are about to experience a long-term trend] in de-globalization…This means a return to more expensive American production and higher prices for consumer goods – in other words – inflation. 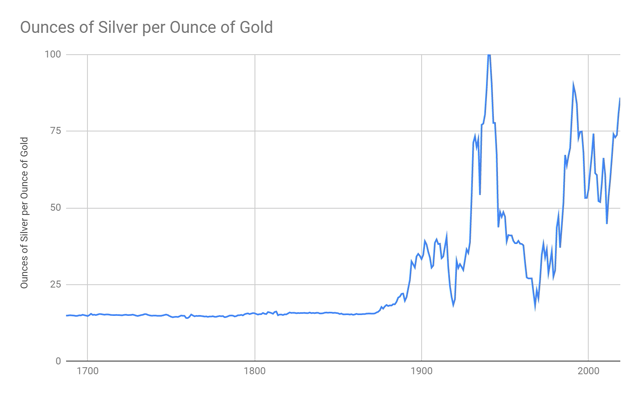 While it’s impossible to say that any ratio is ‘correct’, history does serve as a guide for what’s normal. Based on the simple historical average, the price of silver should be about $62 per ounce.

Another reference point for determining the relative value of something is how much of it exists.

…With massive monetary expansion, potential for inflation and silver’s historical relationship to gold, I believe the upside for silver could be fantastic and is worth consideration. Given its recent under-performance relative to gold, now might be silver’s time.

Editor’s Note:  The original article by Dumb Money has been edited ([ ]) and abridged (…) above for the sake of clarity and brevity to ensure a fast and easy.  The author’s views and conclusions are unaltered and no personal comments have been included to maintain the integrity of the original article.  Furthermore, the views, conclusions and any recommendations offered in this article are not to be construed as an endorsement of such by the editor. Also note that this complete paragraph must be included in any re-posting to avoid copyright infringement.