U.S. House Prices Have MUCH Further To Fall! Here’s Why (+2K Views)

data…[yet, while] I do not dispute the improvement in the data regarding home starts, permits, pending sales, etc.,… [see graph below] these data points are still mired at very depressed levels so the assumption is that if home building is stabilizing then it is only a function of time until home prices began to rise as well. Right? Not so fast.. [Let me explain.] Words: 1100

So says Lance Roberts (www.streettalklive.com) in edited excerpts from his original article*.

Roberts goes on to say, in part: 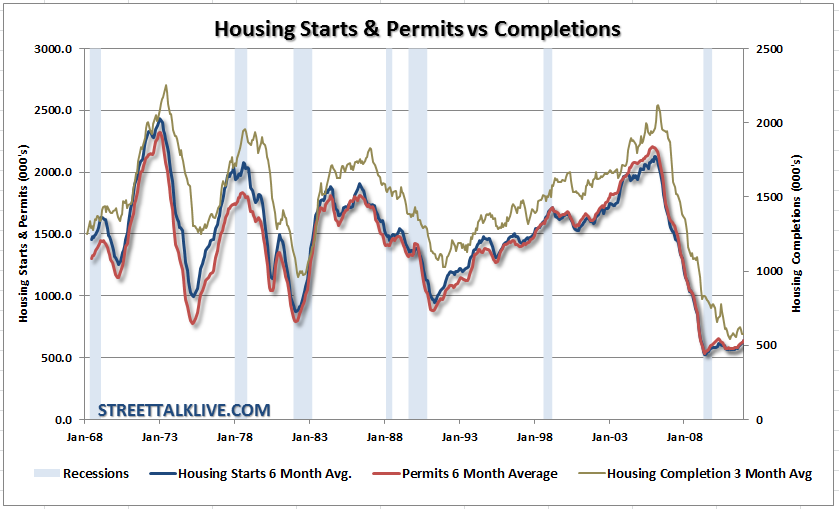 The point I want to specifically address today is home prices. After the past few bloody years of price declines, and repeated calls of a housing bottom each year, 2012 proves to be no different with yet more calls for a bottom [- and] why shouldn’t there be? Home prices have declined, according to our NAR/Core Logic Composite Index…, by a whopping 36%. Interest rates are at their lowest levels ever and you can still get low down payment mortgage if you can qualify…[but]…

When the average American family sits down to discuss buying a house they do not discuss buying a $125,000 house…[but, rather,] what type of house they need (a three bedroom house with two baths, a two car garage, a yard, etc.) [and] that is the dream part. The reality of it smacks them in the face, however, when they start reconciling their monthly budget.

Here is a statement I have not heard discussed by the media. People do not buy houses – they buy a payment. The payment is ultimately what drives how much house they buy. Why is this important? Because it is all about interest rates. 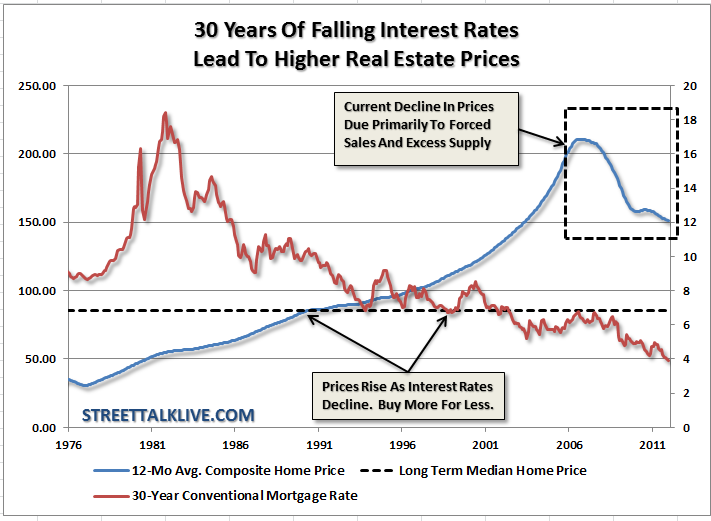 Over the last 30 years a big driver of home prices has been the unabated decline of interest rates. When declining interest rates were combined with lax lending standards – home prices soared off the chart. No money down, ultra low interest rates and easy qualification gave individuals the ability to buy much more home for their money. The demand for home ownership, promulgated by the Fed, the finance and real estate industry, drove prices far beyond rational levels. Easy credit terms combined with a plethora of pshychological encouragement from home flipping and house decorating television to direct advertisment of the “dream of homeownership” enticed families to bite off way more than they could ever hope to chew. 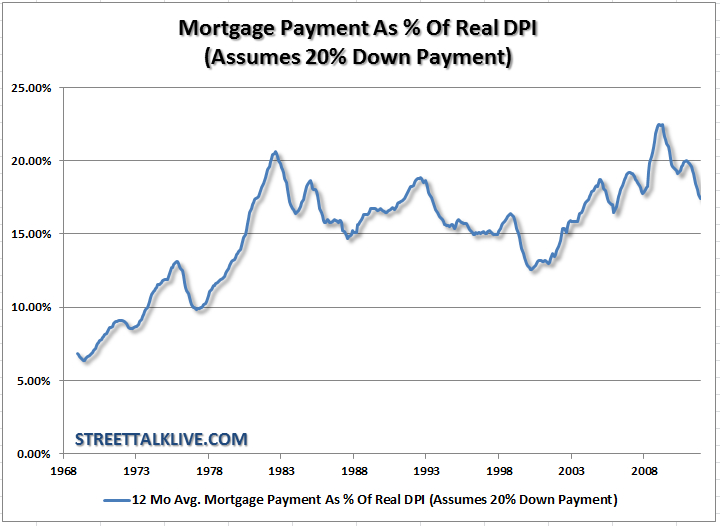 In 1968 the average American family maintained a mortgage payment, as a percent of real disposable personal income (DPI), of about 7%. Back then, in order to buy a home, you were required to have skin in the game with a 20% downpayment. Today, assuming that an individual puts down 20% for a house, their mortgage payment would consume more than 15% of real DPI. In reality, since many of the mortgages done over the last decade required little or no money down, that number is actually substantially higher. You get the point. With real disposable incomes stagnant as inflationary pressures rise that 15% of the budget is becoming much harder to sustain.

The decline in home prices so far has largely been due to the intial process of the real estate bust and the deleveraging of the American household balance sheet. According to recent data as much as 2/3rds of the sales completed so far have been distressed in some form or fashion. However, the real potential for declines in price come when interest rates began to rise. 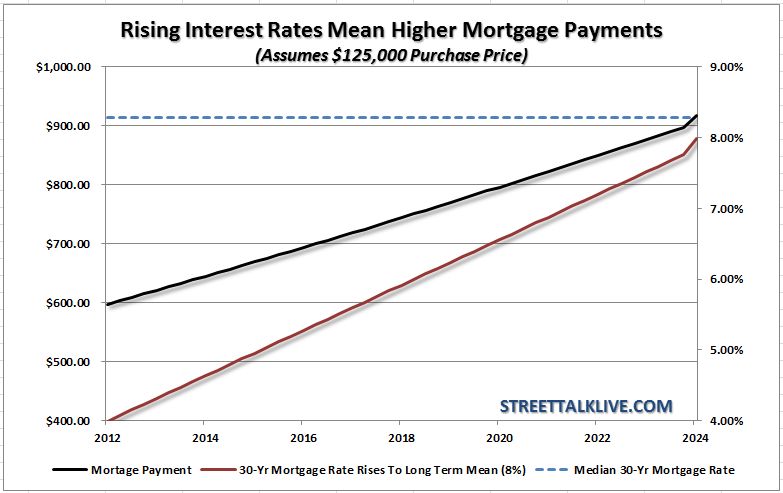 At some point in the future interest rates will begin to rise back towards the long term median of 8.9%. From the current 4% rate that is a substantial rise. However, before you guffaw the idea entirely, let me just remind you that 30-year interest rates were almost 7% in mid-2006. Therefore a rise to the long term median is not entirely out of the question – the only debate will be the timing and the trigger of the event.

With this in mind let’s review how home buyers are affected. If we assume a stagnant purchase price of $125,000, as interest rates rise from 4% to 8%…, the cost of the monthly payment for that same priced house rises from $600 a month to more than $900 a month – a 50% increase. However, this is not just a solitary effect. Since home prices on the whole are affected by those actively willing to sell – the rise of interest rates lead to declines in home prices accross the board as sellers reduce prices to find buyers. Therefore, if the average American family living on $55,000 a year sees their monthly mortgage payment rise by 50% this is a VERY big issue… 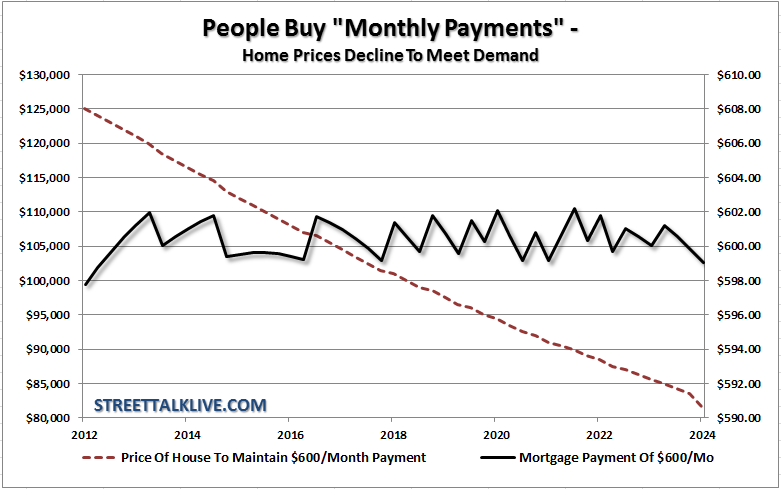 See what I mean about interest rates? Since there are only a limited number of buyers in the pool at any given time the supply/demand curve is critcally affected by the variations in interest rates. This is why the Fed has been so adamant to suppress interest rates at very low levels and have injected trillions of dollars to acheive that goal. They understand the ramifications of rising interest rates, not only on home prices, but also on the $3 Trillion in debt they are currently carrying on their balance sheet.

There are basically two possible outcomes from here:

I am really hoping for the latter. In either case there is a negative and sustained impact to housing going forward. The excesses that were created over the last 20 years will have to be absorbed into the system allowing prices to return to a more normalized and sustainable level.

[There is no doubt]…that home construction, sales, etc. can stabilize at these lower levels…[but] stabilization and a recovery, such as the media is currently hoping for, are two vastly different things. We are very early in the entire deleveraging process and until the excesses are removed from the system the real housing bottom may be more elusive than anyone expects.

2. Believe it or Not: Australia’s Housing Bubble is Worse Than That in the U.S.

The explosion of Australia’s mortgage debt is viewed by many economists and commentators as the key factor behind Australia’s unaffordable housing [and the primary] reason why Australia’s housing bubble is larger than that experienced in the United States in the mid-2000s. [Another factor is] the strangulation of fringe urban land supply via increasingly restrictive planning processes. [Let me substantiate that contention by comparing the two countries housing situation via a number of descriptive graphs. Words: 817

3. Unlike the U.S and U.K, Canada’s Home Prices Are STILL Rising!

4. Forecast for House Prices is Horrific! Here’s Why

As bad as the housing crisis has been over the past three years, it has only been a warm up to what we have headed our way… [In fact,] the forecast is horrific, to say the least!28% of US homeowners already owe more on their mortgage than their home is worth [and]… 27% of American homeowners are considering walking away from their mortgage…This is going to significantly drive home prices further down. [Let’s look at the details.] Words: 657

5. Housing Crash Continues: Why Now Is NOT The Time To Buy!

The housing crash is still in process and here are 10 reasons why it is still a terrible time to buy. Words: 1670

If you think home prices have hit bottom and are now headed back up for good, think again! Round two is about to begin. Words: 552

Anyone who sees a rising pool of millions of delinquent mortgages as the foundation of a recovery in housing valuations isn’t considering the feedback loop which is now firmly in place. The foreclosure pipeline will be full for years to come precluding any “recovery” in housing valuations as supply will swamp demand. Words: 385

Real estate has definitely not bottomed in the U.S., and probably not anywhere else either. You have to take a long-term view of this. At this point in time I am completely uninterested in speculating in U.S. real estate – and I don’t foresee being interested for at least five years. I reserve the right to change my mind, but I think it’ll be at least five years. Words: 1340

Share
Previous S&P 500 Should Continue Climbing Until October and Then Decline 15-30%! – Here's Why
Next Why Did the Baltic Dry Index Collapse? Here's Why