U.S. Financial System is a Shell Game, a Confidence Trick, a Ponzi Scheme, Which Will Eventually Collapse! (+2K Views)

Lorimer Wilson June 28, 2011 Comments Off on U.S. Financial System is a Shell Game, a Confidence Trick, a Ponzi Scheme, Which Will Eventually Collapse! (+2K Views) 2,637 Views

So says Michael T. Snyder  in edited excerpts from an article* which Lorimer Wilson, editor of www.munKNEE.com  (It’s all about Money!), has further edited ([  ]), abridged (…) and reformatted below  for the sake of clarity and brevity to ensure a fast and easy read. Please note that this paragraph must be included in any article re-posting to avoid copyright infringement.  Snyder goes on to say:

The Federal Reserve is like a con artist that is desperately trying to stay one step ahead of everyone else. The folks at the Fed know that the debt that the U.S. government has accumulated is not sustainable and will eventually collapse. They also know that the U.S. dollar is eventually going to become essentially worthless. For now, however, the Federal Reserve is putting on a grand show and is trying to keep everyone believing that the game is fair and legitimate.

The Federal Reserve’s much ballyhooed “QE2” program has come to an end, and most Americans still don’t even understand what “quantitative easing” is. Basically, what the Federal Reserve did was zap hundreds of billions of dollars into existence out of thin air and used them to buy U.S. government debt. It is kind of like if you are playing poker with someone and they reach under the table and pull out a gigantic pile of chips which they add to their own stack. In the process, the big banks made a ton of money because they are the ones that the Federal Reserve was buying U.S. Treasuries from and the U.S. government was happy because all of the new government debt being issued was getting soaked up by the system. Of course, all of this is one giant Ponzi scheme, but up to this point the Federal Reserve has gotten away with it. Meanwhile, average Americans were getting the short end of the stick because all of this new money has been causing the price of food and the price of gas to go up.

Now that QE2 has come to an end does that mean that “quantitative easing” is going to be completely over? No, not really. The shell game continues. The Federal Reserve has announced that it is going to continue to purchase U.S. government debt using the proceeds from maturing debt that it already owns. It is being projected that the Federal Reserve will purchase $300 billion in U.S. government debt over the next 12 months using this method. This isn’t being called “quantitative easing,” but that is essentially what it is. In fact, one CNN article is calling it “QE2.5”.

Loans to the Big Banks

Quantitative easing is just one example of a shell game run by the Fed. There have been lots more. For example, during the financial crisis, the Federal Reserve started loaning gigantic amounts of cash to the big banks for next to nothing. The big banks took a lot of this cash and invested it in U.S. Treasuries. U.S. Treasuries typically only pay a couple of percentage points, but when you can borrow massive amounts of nearly free money suddenly they become extremely profitable. Instead of loaning out large amounts of money to all of us to get the economy rolling again, the big banks just parked huge amounts of cash in U.S. Treasuries and watched the risk-free profits come rolling in. In this way, the Federal Reserve helped big banks make a ton of money and they supported the exploding federal government debt load at the same time.

The chart below shows that the amount of U.S. government securities owned by the banks has increased exponentially since the beginning of the financial crisis. This is not an accident. 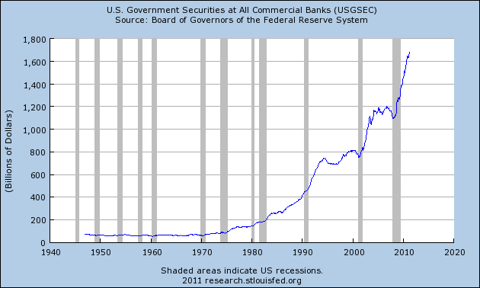 The Federal Reserve does lots of stuff like this. It knows that it will probably never get audited, and it knows that the American people don’t understand all of this financial stuff, so it gets away with it. What if something came along, however, and suddenly interrupted the shell games that the Fed is playing? Well, that is exactly what this debt ceiling debate threatens to do. If the U.S. defaults, even for a short time, all of the financial shell games and Ponzi schemes are going to be greatly jeopardized.

If Congress does not raise the debt ceiling by August 2, the U.S. government will start defaulting, and that would unleash a tremendous amount of chaos. A recent USA Today article described some of the things that might happen if the government was not able to borrow any more money later this summer:

If Social Security, Medicare, Medicaid, unemployment benefits, payments to defense contractors and interest payments on Treasury bonds were exempt, that would be all the government could afford for the month. No money for troops or veterans. No tax refunds. No food stamps or welfare. No federal salaries or benefits.

In addition, financial markets all over the world would be severely rattled. If the default only lasted a couple of days it would not be bad, but if the U.S. ended up defaulting on debts for weeks or months it really would be cataclysmic. [Indeed,] the International Monetary Fund warned this week that a failure to raise the debt ceiling by August 2 would be a “severe shock” to global financial markets. In this case, the IMF is actually right. In fact, a “severe shock” would be an understatement. [In fact,] the managing director of Standard & Poor’s has told Reuters that if the U.S. starts defaulting, the credit rating on U.S. Treasury bonds that are supposed to mature on August 4 will go all the way down from AAA to D…

A lot of Americans believe that Congress should just refuse to raise the debt ceiling and let the whole system crash but the reality is that most Americans simply have no idea how much of a financial disaster that would be for the entire globe. Yes, the U.S. national debt is completely and totally out of control. Yes, something must be done about it urgently but defaulting on our debts and wrecking global financial markets is not going to solve much of anything. Sadly, even if we do not default on our debts this year, the reality is that the U.S. government debt bubble is going to collapse one way or another eventually.

U.S. Economy is Being Dismantled

The path that we are currently on is not even close to sustainable. Even as our debt expands exponentially, the U.S. economy is being systematically dismantled and we are becoming poorer as a nation… Jobs and businesses are leaving the United States at a staggering rate because of cheap labor overseas and because of ridiculous regulations…Businesses of all sizes are trying to avoid… the highest corporate tax rate in the entire world…[and, as such,] have a great deal of incentive to avoid incorporating in the United States. The rate of new business creation in the United States has been declining steadily since the 1980s. We won’t have a chance at a real economic recovery until the creation of small businesses is encouraged once again.

What we are doing is not working so what is the answer? As I have said before, we need to entirely scrap the current tax system and come up with something that works in the 21st century – but we all know that is not going to happen. Meanwhile, our economy continues to unravel.

According to the Department of Labor, the unemployment rate rose in 210 metro areas during the month of May, and it only declined in 131 metro areas. Consumer confidence in this country has hit a seven-month low, and average Americans are becoming increasingly anxious about the state of the economy. Unfortunately, most of our politicians don’t seem to have any answers and the Federal Reserve is just trying to keep their shell games going.

Share
Previous Think You Know All About Silver? Take This Quiz and Find Out (+2K Views)
Next Will Greece Default, the Euro Unravel and the U.S. Dollar be Saved?