With both the fiscal cliff and debt ceiling looming, US stocks beginning to trail

stocks overseas and the much increased volatility of the U.S. market compared to those outside the U. S., it is getting difficult to argue that the U.S. is still the “safe port” in a storm. Given the changing dynamic, we continue to believe that this is a good time for investors to consider lowering their overweight position in US equities while raising the allocation to international stocks. [I explain my position more fully in this article.] Words: 707

So writes Russ Koesterich (http://isharesblog.com/blog/) in edited excerpts from his original article* entitled The Cost Of Viewing The U.S. As A ‘Safe’ Haven.

Koesterich goes on to say, in part:

There were reasonable arguments for keeping your money [invested] in the United States over the past five years [even as] the United States endured a brutal recession and is still suffering through an anemic recovery as, on a relative basis, the economy has been a bright spot, particularly compared to Europe and Japan. Since the end of the recession corporations have churned out record profits, the dollar has been stable, and interest rates remain near historic lows.

In the past few years, having a strong US focus has been a good trade. Since exiting the recession in mid-2009, US stocks have significantly outperformed international markets but this trend is starting to break [as can be seen in the chart below]. 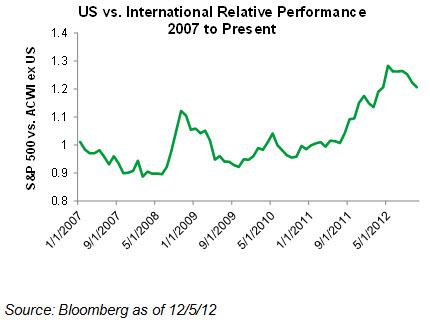 The Return Opportunity of Investing Internationally

Since the summer, US stocks have trailed stocks overseas. In the three months between the end of August and the end of November, US stocks gained less than 1% as measured by the S&P 500 versus a 5.5% advance for the MSCI ACWI-ex US Index. I believe this trend is likely to continue.

While US stocks still appear reasonably priced, and downright cheap compared to fixed-income alternatives, they are relatively expensive compared with other countries.

Some of the [above mentioned] premium is justified. As I mentioned, US companies maintain near-record profitability. Assuming the fiscal cliff is avoided, the United States is almost certain to grow significantly faster in 2013 than either Europe or Japan but with the fiscal cliff looming, the size of the premium is becoming harder to rationalize.

Should the full brunt of the fiscal cliff hit and remain in place, a prolonged period of fiscal tightening would dramatically alter the U.S. growth picture. The United States would likely go from an environment of 2% growth to a modest recession. Under this scenario, Japan and perhaps even Europe are likely to grow faster in 2013.

Even if most of the fiscal cliff can be avoided, the United States is still likely to experience some fiscal drag in 2013, probably on the order of magnitude of 1% to 2%. For an economy only growing by 2%, this will represent a significant headwind and will lower the differential between US growth and other developed countries.

Beyond the fiscal cliff, the current value differential between the United States and emerging markets appears particularly rich. We are cautiously optimistic that emerging market countries will re-accelerate in 2013. While they are unlikely to match the glory days of 2010, lower relative valuations and faster growth suggest that this is a good time to overweight this asset class.

The Risk Argument for Investing Internationally

With both the fiscal cliff and debt ceiling looming, it is getting difficult to argue that the United States is still the “safe port” in a storm. Given the changing dynamic, we continue to believe that this is a good time for investors to consider lowering their overweight position in US equities while raising the allocation to international stocks.

1. Here’s Some Quality Advice on How to Navigate the Markets & Protect Your Wealth During the Next 4 Years

The U.S. has reached a Debt to GDP ratio of over 100%. Indeed, at no point in history has the U.S. had this much debt during peacetime – and the fact that we’re overspending by this amount at the exact time that other countries are showing signs of shunning US Treasuries is a formula for disaster. With that in mind, it is highly likely that the U.S. will enter at the very minimum a debt crisis and quite possibly a currency crisis during the Obama administration’s second term. [Such being the case,] now, more than ever, investors need to get access to high quality guidance and insights [and this article does just that] to help you navigate the markets and protect your wealth. Words: 964

The last couple of weeks have offered such amazing buying opportunities that I’m now “all in” and suggest you follow suit, immediately. In 2-6 months you can thank me and send me photos of the vacation you bought with the extra money. Words: 508

Savers will not stand idly by and watch their savings get wiped out by taxes and inflation….[which] is good news for investors who buy and hold commodity assets today – and it’s also a stark reminder to not be fooled by the short-term head fakes that might make it look like the commodity bull is over. Stay the course – the biggest profits are yet to come. [Here’s why.] Words: 405

Share
Previous It's Time to Get "All In"! Here's Why
Next QE4: An Early Christmas Present For Most Investors – Here’s Why (+2K Views)