The above are edited excerpts from an article* by Dave Kranzler (investmentresearchdynamics.com) as posted on SeekingAlpha.com under the title The U.S. Economy: Deep Recession Coming.

Kranzler goes on to say in further edited excerpts:

Driven by a downturn in private inventory investment, exports and nonresidential fixed investment, the Commerce Department’s Q1 Revised GDP fell from the initial .1% estimated gain to a 1% decline.

As you can see from the graph below, retail sales and food service ex-gasoline, are showing that a definitive downtrend has started (source: Calculated Risk, edits are mine): 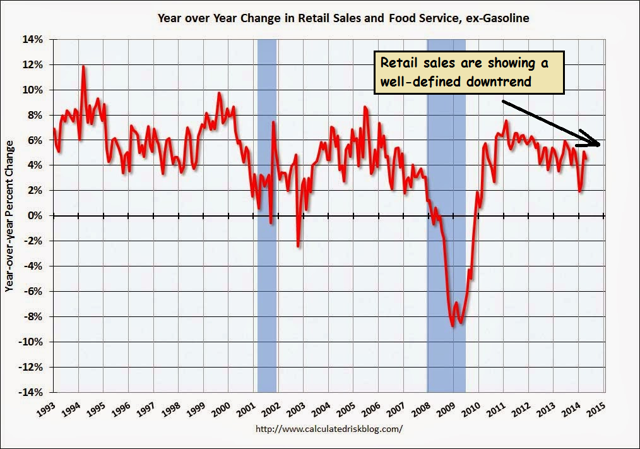 Furthermore, if you take into account the affect of inflation on the nominal retail sales which the Government estimated at 1.3% in its GDP report, real retail sales expressed in unit volume declined by well over 1%…[In addition,] the Dept of Commerce’s Personal Income and Outlays report for April… showed personal consumption expenditures declined in April by .1% and by .3% after stripping out inflation. If retail sales continued to deteriorate in May from April, it will have an adversely negative effect on the Q2 GDP.

…There has been a definitive downtrend in month-to-month sequential sales volume that began in July 2013…The big buy-to-rent institutional investment buyer, which has been the primary driver of home sales and price gains over the last 18 months, has largely withdrawn as a buyer of homes this year. To be sure, the individual “flipper” buyer is still active, although I suspect that segment of demand will begin to fade as new and existing home inventory continues to build and sales continue to decline.

While April new and existing home sales showed seasonal gains from March to April, they both registered declines year over year, with existing home sales down 6.8% and new homes sales down 4.2%. The year-over-year declines have been persistent for several months now. In addition, it is likely that the May existing home sales report released later this month will show a continuing deterioration in the housing market based on the recent Pending Home Sales report …[which] reflects both declining demand despite rising home inventory. With the recent housing market data showing a probable continued slowdown in homes sales, I believe it confirms that the housing component of GDP will likely affect the GDP calculation negatively in Q2.

…I also believe that auto sales, which have been largely fueled by subprime auto lending will soon start to track negatively month to month on a consistent basis and contribute to further contraction in the U.S. economy.

How to Take Advantage

If you have a bearish view on the economy, I recommend shorting the retail and housing sectors…

Many mainstream economists want nothing to do with economic cycle theorists, but it should be noted that economic cycle theories have enabled some analysts to correctly predict the timing of recessions, stock market peaks and stock market crashes over the past couple of decades – and there are many economists who believe that the period from 2014 to 2020 is going to turn out to be pure hell for the United States. END_OF_DOCUMENT_TOKEN_TO_BE_REPLACED

2. Is An Economic Collapse of U.S. Possible, Likely or Imminent?

Much has been written by a variety of analysts on the health of the U.S. economy, its susceptibility to a collapse, and possible/likely/imminent (depending on who the author is) of an impending stock market crash, falling U.S. dollar and future hyperinflation. Below is a cross-section of opinions on the subject to help you get a more enlightened understanding of the factors at play and what influence, if any, they may have on how things unfold. END_OF_DOCUMENT_TOKEN_TO_BE_REPLACED

The impending emergence of The Four Horsemen of the Apocalypse (Debt, Derivatives, Deficits & Dollar) may soon sound the death knell of the entire U.S. economic recovery [we have seen] since early 2009 and eventually and sadly morph into mass Unemployment, Home Foreclosures, Stagnant Wages & Shrinking Retirement. END_OF_DOCUMENT_TOKEN_TO_BE_REPLACED

These 5 red flags will give you anywhere from a few days to a few months of warning that things are about to change drastically…and well before those around you grasp the full extent of what is going on. This is hopefully a scenario that never happens as this will truly be the end of the world as you knew it. END_OF_DOCUMENT_TOKEN_TO_BE_REPLACED

Share
Previous What Coming Negative Deposit Rates In U.S. Mean For Future of Gold & Silver & PM Mining Shares
Next Think Your Mobile Banking App Is Safe? Think Again! You Could Be In Deep “Svpeng” – Here’s Why