While Washington debates raising the debt ceiling and cutting spending to achieve $1 to $2 trillion of savings over the next decade, it’s worth pointing out that these savings may never materialize because the existing official budget numbers are too optimistic across several fronts. [Let me show you some numbers that will both surprise, concern, and enlighten you.] Words: 1070

So says  Russ Koesterich (http://isharesblog.com) in an article* which Lorimer Wilson, editor of www.munKNEE.com

(It’s all about Money!), has further edited ([  ]), abridged (…) and reformatted below  for the sake of clarity and brevity to ensure a fast and easy read. Please note that this paragraph must be included in any article re-posting to avoid copyright infringement. Koesterich goes on to say:

In a recent Wall Street Journal opinion piece** by former Federal Reserve governor Lawrence B. Lindsey entitled, “The Deficit is Worse Than We Think,” Lindsey…[writes]:

Washington is struggling to make a deal that will couple an increase in the debt ceiling with a long-term reduction in spending…but we should be prepared for upward revisions in official deficit projections in the years ahead—even if a deal is struck. There are at least three major reasons for concern. 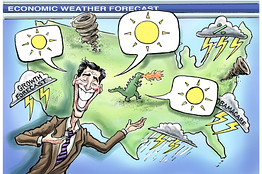 A normalization of interest rates would upend any budgetary deal, if and when one should occur. At present, the average cost of Treasury borrowing is 2.5%. The average over the last two decades was 5.7%. Should we ramp up to the higher number, annual interest expenses would be roughly $420 billion higher in 2014 and $700 billion higher in 2020.

The 10-year rise in interest expense would be $4.9 trillion higher under “normalized” rates than under the current cost of borrowing. Compare that to the $2 trillion estimate of what the current talks about long-term deficit reduction may produce, and it becomes obvious that the gains from the current deficit-reduction efforts could be wiped out by normalization in the bond market.

To some extent this is a controllable risk, however. The Federal Reserve could act aggressively by purchasing even more bonds, or targeting rates further out on the yield curve, to slow any rise in the cost of Treasury borrowing. Of course, this carries its own set of risks, not the least among them an adverse reaction by our lenders. Suffice it to say, though, that given all that is at stake, Fed interest-rate policy will increasingly have to factor in the effects of any rate hike on the fiscal position of the Treasury.

The official growth forecasts are much higher than what the academic consensus believes we should expect after a financial crisis. That consensus holds that economies tend to return to trend growth of about 2.5%, without ever recapturing what was lost in the downturn but the President’s budget of February 2011 projects economic growth of 4% in 2012, 4.5% in 2013, and 4.2% in 2014. That budget also estimates that the 10-year budget cost of missing the growth estimate by just one point for one year is $750 billion. So, if we just grow at trend those three years, we will miss the president’s forecast by a cumulative 5.2 percentage points and—using the numbers provided in his budget—incur additional debt of $4 trillion. That is the equivalent of all of the 10-year savings in Congressman Paul Ryan’s budget, passed by the House in April, or in the Bowles-Simpson budget plan.

It is increasingly clear that the long-run cost estimates of ObamaCare were well short of the mark because of the incentive that employers will have under that plan to end private coverage and put employees on the public system. Health and Human Services Secretary Kathleen Sebelius has already issued 1,400 waivers from the act’s regulations for employers as large as McDonald’s to stop them from dumping their employees’ coverage.

Nevertheless, a recent McKinsey survey found that 30% of employers with plans will likely take advantage of the system, with half of the more knowledgeable ones planning to do so. If this survey proves correct, the extra ObamaCare bill for taxpayers would be roughly [$450 billion] ($74 billion in 2014 rising to $85 billion in 2019) thanks to the subsidies provided to individuals and families purchasing coverage in the government’s insurance exchanges.

Underestimating the long-term budget situation is an old game in Washington – but never have the numbers been this large. [The above additional debt adds up to $9.35 Trillion!!]

There is no way to raise taxes enough to cover the [abovementioned] problems. The tax-the-rich proposals of the Obama administration raise about $700 billion, less than a fifth of the budgetary consequences of the excess economic growth projected in their forecast. The whole $700 billion collected over 10 years would not even cover the difference in interest costs in any one year at the end of the decade between current rates and the average cost of Treasury borrowing over the last 20 years.

Only serious long-term spending reduction in the entitlement area can begin to address the nation’s deficit and debt problems. It should no longer be credible for our elected officials to hide the need for entitlement reforms behind rosy economic and budgetary assumptions.

While we should all hope for a deal that cuts spending and raises the debt ceiling to avoid a possible default, bondholders should be under no illusions. Under current government policies and economic projections, they should be far more concerned about a return of their principal in 10 years than about any short-term delay in a coupon payment in August.

While I agree with Lindsey’s analysis, I don’t agree with his conclusion that bondholders should be concerned about a return of their principal in 10 years as I don’t think the U.S. is in danger of defaulting. I believe, in contrast, that investors should be most concerned about the implications of the deficit — higher interest rates and potentially higher inflation.

Investors can prepare for an expanding deficit by making sure their equity portfolios are adequately diversified and, should they expect inflation to become more of a threat over the next couple of years, consider having more commodities exposure in their portfolios as commodities are often used as a hedge when inflation first starts to rise.

Share
Previous The CPI, TIPS and Protecting Yourself From Inflation: What You Need to Know
Next Get Ready: Economic Hell is Coming!