This Video – Already Viewed by 876,000 – Clearly Explains Why Economic Collapse of U.S. Is Inevitable (+3K Views)

This short video – on the unsustainability of government spending – should be 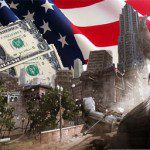 watched by everyone, including those not yet old enough to vote. It should be shown in every high school and college classroom. Anyone that cannot understand this presentation should not be allowed out without a guardian.

So says Monty Pelerin (www.economicnoise.com) in edited excerpts from his original post*.

The reasons for this ending and its inevitability are explained in this short (5 minute) presentation by Hal Mason in an email that has been circulating [and has already been viewed by 876,000 people worldwide]. The simplicity of his presentation allows understanding for even the economically illiterate. Simple arithmetic is sufficient to understand the impossibility of our current path and our inevitable ending.

It’s the numbers, Stupid and the people who elect the corrupt, self-serving politicians in Washington who continue down this road to destruction.

I think the U.S. government and our central bank has a tremendously transparent view of what is coming down the road in terms of financial distress….I believe the evidence [I present below] shows that they are preparing for this eventual crisis in a command and control fashion, without alerting the public to the coming implosion. The most immediate trigger event is the looming peril of a collapsing economy followed by inevitable civil unrest. I believe they will use the despair that flows forth from the fiscal wreckage as an excuse to institute martial law. Call it “crazy”. Call it “conspiracy theory”. Call it “coincidence”. Call it “fear mongering”. Call it whatever you like but I find it far more insane to shrug off the strange behavior of our power structure, and simply hope that it’s all irrelevant to the future. [Once I have put forth my evidence and explained its implications in this article I think you will agree.]

The Federal government is gearing up for unprecedented social unrest (worse than Greece or Spain) when Washington is forced to impose “austerity” plans next year… [which will be deemed absolutely necessary to avoid] runaway inflation [that would otherwise occur] to pay for the country’s costly welfare programs like Social Security, Medicare, Medicaid, Food Stamps and massive unfunded liabilities. [Below are the preparations presently underway.] Words: 500

Get ready…Save some cash, load up with gold and silver, and be patient…Start by buying top-grade dividend-paying stocks and gold on dips or corrections, and hold your gold. This era will see the catastrophic collapse of all fiat money. Gold should skyrocket. Get ready for crime and violence…

6. Jim Rogers: Situation to Worsen in U.S. and Lead to Social Unrest

9. This Will NOT End Well – Enjoy It While It Lasts – Here’s Why

10. Events Accelerating Towards an Ultimate Dollar Catastrophe! Here’s Why

11.  Major Inflation is Inescapable and the Forerunner of an Unavoidable Depression – Here’s Why

12. An Inflation Inferno is Expected – but When?

13. Major Price Inflation Is Coming – It’s Just a Matter of Time! Here’s Why

15. Current Distortion of Interest Rates is Unsustainable & Will Have Dire Consequences

Interest rates have been manipulated to keep them extremely low in an attempt to stimulate the economy but…unless deficits are dramatically reduced…. interest rates will eventually rise and government interest expense will double or triple from the amounts being paid today. That potentially triggers a debt death spiral, where government has to borrow more than otherwise expected. It also raises the credit risk and could ratchet interest rates up again. It has happened to Greece, Portugal, Spain and other European countries already this year and could well happen in the U.S. too. Words: 595

16. Eventual Rise in Interest Rates Will Be Downfall of U.S. – Here’s Why

Everyone who purchases a Treasury bond is purchasing a depreciating asset. Moreover, the capital risk of investing in Treasuries is very high. The low interest rate means that the price paid for the bond is very high. A rise in interest rates, which must come sooner or later, will collapse the price of the bonds and inflict capital losses on bond holders, both domestic and foreign. The question is: when is sooner or later? The purpose of this article is to examine that question. Words: 2600

17.  Oh My GAWD! This Infographic on US Debt Is Frightening

LOOK! Everyone needs to see this. United States owes a lot of money. As of 2012, US debt is larger than the size of the economy. The debt ceiling is currently set at $16.394 Trillion, estimated to be hit around Sep 14, 2012. In the infographic below that enormous amount is illustrated in $100 bills. It’s frightening! Words: 605

19. Government Can’t Prevent the Next Financial Diaster – Here’s Why

Even as I write these words, the world’s largest economy — the E.U. — is coming unglued at the seams, the world’s second largest — the U.S. — is careening headlong toward a fiscal cliff that promises to gut its GDP, nearly all of Asia — including Japan, China and India — is slowing…and yet most investors still don’t get the message. [Let me go on to explain just what that message is.] Words: 1357

20. Martin Weiss: You Are Being Forewarned – Again – About an Imminent Financial Megashock!

[You are being forwarned – again – that Europe and the U.S. are now on a collision course with a second Lehman-type megashock….A snowball of events – bank runs spreading across Europe – are bringing us a few steps closer. What [can we expect] next? Let me explain. Words: 1795
Share
Previous These Hidden GEMs are Worth Your Time to Read
Next Fact #1: Revenue Does Not Cover Core US Programs