So writes Monty Pelerin (www.economicnoise.com) in edited excerpts from his original article* entitled Did 5% of The Population Win The Lottery?.

The following chart is a Federal Reserve chart of employment as a percentage of working age adults. Sometimes a picture is worth a thousand words. Sometimes much more. 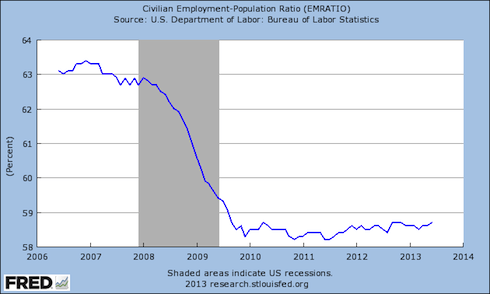 We all know the economy is recovering because the Administration, their media minions and the sell-side analysts on Wall Street tell us this routinely. Most of us also know the propensity for government manipulation of data and/or definitions in a manner that will overstate reality in a favorable fashion. Nevertheless, let’s accept the data and the chart from above.

There is something wrong with the above chart!

This simple chart shows one of two things:

Regardless of what the cause for the above graph is, it ensures that the country will be poorer than it need be.

Share
Previous Market Madness: Stay Tuned, This Story Has Hardly Begun
Next Nothing Has Changed So Gold May Yet Reach $3000/ozt. (2K Views)

The 5 Stages of Collapse: Financial, Commercial, Political, Social & Cultural – Where is the U.S. Now? (+23K Views)