markets, avoiding fresh exposure to equities at these levels and selling some of one’s equity holdings. Long-term investors can still ignore the volatility and buy quality stocks, however, it would make more sense to buy the same stocks after the markets decline 10%-15% than buying it at current levels. [Let me explain more fully.] Words: 665

So says the Economic Fanatic (www.economicfanatic.com) in edited excerpts from an article posted on Seeking Alpha.

The first factor pointing to a possible reversal in the S&P 500 index is the fact that the VIX has touched a five-year low of 13.45 at the end of last Friday’s trade. 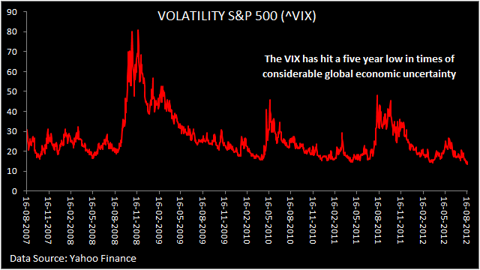 VIX, also known as the fear index, is a measure of the market participant’s expectation of volatility over the next 30 days. A low VIX would, therefore, mean low volatility expectation and should not really concern investors.

My caution, however, comes from the observation and behavior of the VIX in relation with the S&P 500 index in the last 10 years [see below]. 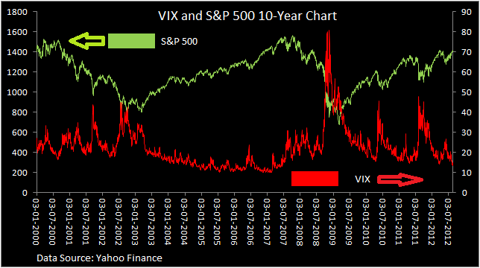 As the chart shows, there has always been a reversal in the VIX index from lower levels and it has been associated with decline in equity markets. The period of 2003-07 was an exception as a globally synchronized boom was underway and equity markets trended higher.

Of course, just the past trend does not make me believe that the VIX will increase leading to a decline in stocks. Apart from encouraging statements, there has been a lack of action by central bankers. The global economy is also on a downturn and the next 3-6 months will witness policy action to support the economy and markets. These events do lead to increased volatility and markets can correct from near-term overbought levels.

There are several reasons to believe that markets are overbought. Before I discuss that, I would like to mention that markets are not terribly overvalued when it comes to P/E valuation. The markets are currently trading at 14 times TTM earnings. 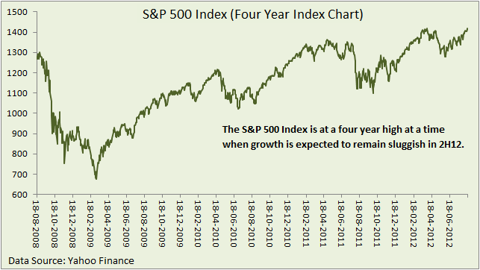 However, markets can correct after an 11% rally in the last two months in the absence of any significant positive cue. Markets are also trading at a four-year high, and it is concerning to see markets at these levels amidst a global slowdown.

Adding to concerns is the fact that the rally has been associated with declining volumes. I am not an expert technical analyst. However, I do understand that a market rally on low volumes is not a great sign. 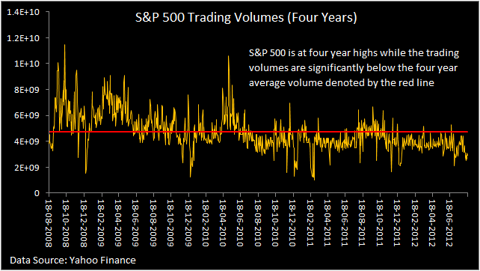 Underscoring my point of near-term overbought markets are the next two charts. 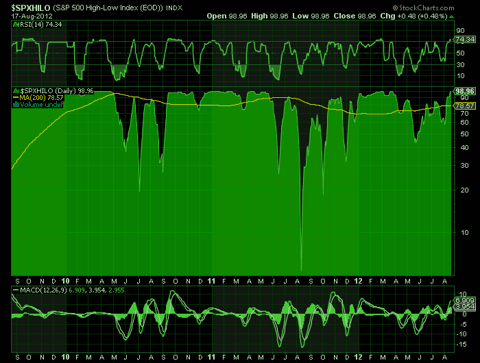 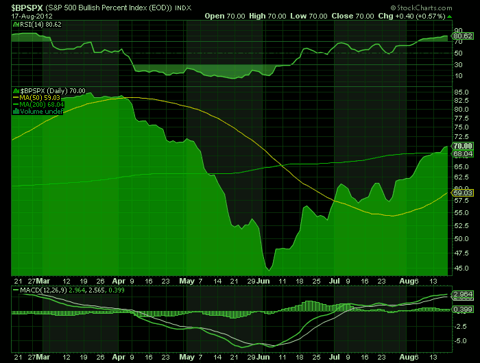 While I believe the S&P 500 index will do reasonably well over the next 3-5 years the above 6 factors combined make a strong case for avoiding the equity markets in the foreseeable future. Long-term investors can still ignore the volatility and buy quality stocks, however, it would make more sense to buy the same stocks after the markets decline 10%-15% than buying it at current levels.

*http://seekingalpha.com/article/815251-exit-equities-as-vix-hits-a-5-year-low-and-s-p-500-index-a-4-year-high (To access the above article please copy the URL and paste it into your browser.)

1. I’m Worried About the Likelihood of a Sharp Market Decline This Fall – For These Reasons

Can experts, whether self-proclaimed or endorsed by others (publications), provide reliable stock market timing guidance? Do some experts clearly show better intuition about overall market direction than others? [NO is the answer to the first question and YES to the second. Let us explain how we came to those conclusions.] Words: 360

Looking at the charts we…[see] a very strong double-top formation – very similar to what we saw back in 1980….[which suggests] that we are headed all the way back down again, possibly even to the lows that we saw in 2011….This is likely to weigh on equities. Words: 291

10. The Bulls vs. the Bears: Which Direction are Stock Prices Going?

We are continuing to see ongoing pessimism among individual investors about the short-term direction of stock prices [but if you are a contrarian you should bet on a continued rise in stocks despite the continued sense of unease. Let’s take a look at a few charts that tell the story.] Words: 510

Share
Previous And You Wonder Where Your Money Goes! Here’re the Costs of Living in the USA (+2K Views)
Next I'm Worried About the Likelihood of a Sharp Market Decline This Fall – For These Reasons