Lorimer Wilson August 22, 2011 Comments Off on These 5 Situations Would Put An End To The Gold Bull Market 2,092 Views

With gold’s ever increasing price and all of the bullishness out there today [I have identified] 5 different situations that would cause the gold trade to unwind. Two are more of the short-term correction variety, while three are more of the long-term new bear market type. [Let me explain.] Words: 831

So says Eric Parnell (www.gerringwm.com/) in an article* which Lorimer Wilson, editor of www.munKNEE.com (It’s all about Money!), has further edited ([  ]), abridged (…) and reformatted below  for the sake of clarity and brevity to ensure a fast and easy read. Please note that this paragraph must be included in any article re-posting to avoid copyright infringement. Parnell goes on to say:

I will begin with the short-term effects.

1. Increase in Margin Requirements From the Exchanges

An increase in the trading collateral requirements, or margin hikes, on gold futures from the likes of the Chicago Mercantile Exchange or Interactive Brokers makes it more costly to buy futures contracts. Such moves have led to sudden sharp corrections in the gold price. Typically, these have essentially opened up attractive pullback entry points for new GLD longs, however.

The financial crisis in late 2008 was a major liquidity event that caused a sharp sell-off in gold, as institutions sold the assets that were most easily sold first in an effort to raise capital. Just as we saw with the TIPS (Treasury Inflation Protected Securities) market around the same time period, once institutions have finished dumping these safe haven assets into the market, investors eagerly stepped in to capitalize. 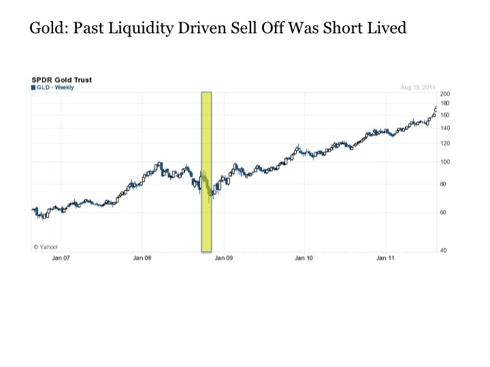 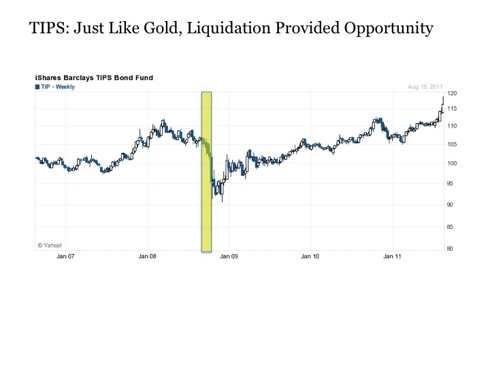 So in regards to the short-term risks, they tend to create just as much opportunity as they do near-term stress.

The three more critical long-term threats that could bring an end to the gold bull market are the following.

1. A Shift to Strong Dollar Policy in the U.S.

The gold rally began back in January 2002 which was simultaneous with U.S. policy makers adopting a weak dollar policy. The rapid acceleration in the gold price since the financial crisis has been supported by the further depreciation of the dollar coupled with competitive currency devaluations worldwide. It was not that long ago that gold was mired in a two decade long bear market, which coincided with a period of U.S. dollar strength. Thus, if U.S. policy makers decided to truly shift their stance toward promoting a stronger dollar at some point in the future, this would be bearish for gold and could mark the end of the current bull market. 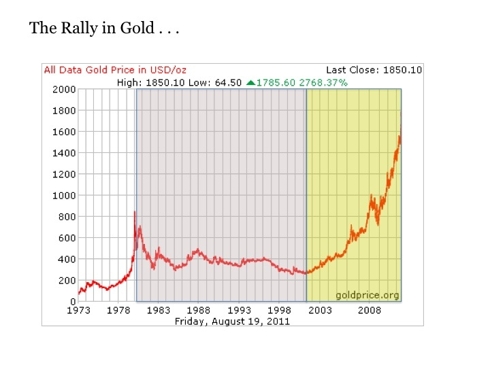 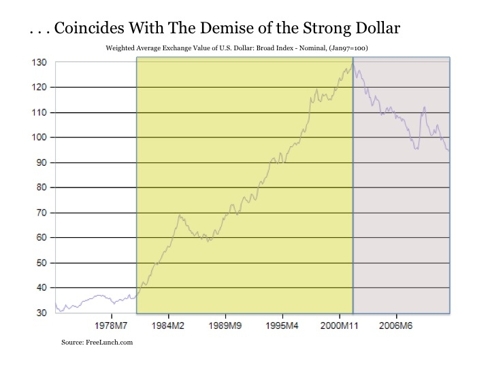 Another factor that has been supportive of gold in recent years has been the increasingly deteriorating fiscal situation in the United States along with aggressively easy monetary policy from the Fed. If investors began to get the sense that the U.S. was finally working seriously to get the fiscal house in order and that monetary policy makers were turning more hawkish, this would undermine the gold thesis.

A key factor that had gold buried in the investment scrap heap once former Fed Chairman Paul Volcker broke the back of inflation in the early 1980s until the early 2000s was the fact that we had steadily strong economic growth and pricing stability (inflation under control, no threat of deflation) both in the U.S. and abroad across most developed economies. With faith in continued prosperity and the fiat currency system, investors felt less inclined to seek the store of value that gold now provides for investors. Once the global economy can finally return to these types of stable conditions, the gold bull market would likely come to an end.

In regards to the long-term circumstances that could result in the end of the gold bull market, none of these fundamental changes appear to be coming on the horizon anytime soon. Until then, while short-term pullbacks should be expected that might sometimes be unsettling, we should continue to see positive long-term support for gold prices in the coming years. For these reasons, I remain long gold.

Share
Previous S&P 500 "Death Cross" Now in Place! What are the Implications?
Next The REAL Reason Gold is Escalating in Price (+2K Views)