While I remain cautious on stocks and the risk trade, the technical

picture shows that the uptrend to be intact and the bulls should still be given the benefit of the doubt for now. At this point, any call for a correction is at best conjecture [as evidenced by the following 4 indicators]. Words: 399; Charts: 4

Regular readers know that I have been cautious on stocks lately. The market action last week is best characterized as volatile and sloppy. The new high achieved on SPY on Friday was accomplished on low volume and a non-confirmation on On Balance Volume (OBV) [as seen in the chart below so,] at this point, any call for a correction is at best conjecture. 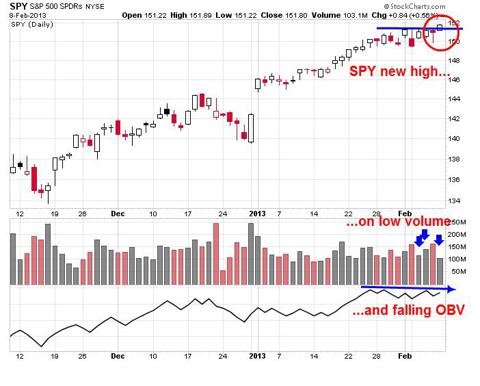 I am watching the relative action of the cyclical stocks to see if a correction has truly begun. The chart below of the relative return of the Morgan Stanley Cyclical Index (CYC) against the market illustrates my point. CYC remains in a relative uptrend and it has pulled back to test the relative uptrend line – but I cannot call it a technical breakdown.

Globally, the South Korean economy is known to be highly cyclical and the KOSPI is used as a measure of cyclicality. Currently, KOSPI is showing a pattern similar to the relative return of CYC to SPX – a pullback to test the uptrend line – [as can be seen in the chart below]. It could be said, however, that since South Korea is a competitor to Japan in exporting capital goods to China, the recent JPY devaluation is creating headwinds for Korean stocks and the pullback may be reflective of those circumstances.

In conclusion, while I remain cautious on stocks and the risk trade, the technical picture shows that the uptrend to be intact and the bulls should still be given the benefit of the doubt for now. Nevertheless, my inner trader is closely watching these cyclical indicators and staying long with very tight stops.

*http://humblestudentofthemarkets.blogspot.ca/2013/02/correction-watch-cyclicals.html (Subscribe to Humble Student of the Markets by Email)

1. Don’t Buy This Stock Market. It Isn’t Worth the Risk. Here’s Why

Don’t buy this stock market. It isn’t worth the risk. Relative to earnings, most stocks aren’t expensively priced—but there’s a reason for that. [Let me explain.] Words: 318

2. Bull Market in Stocks Isn’t About to End Anytime Soon! Here’s Why

3. Insider Trading Suggests That a Market Crash Is Coming

5. 5 Reasons To Be Positive On Equities

It seems clear that there are a number of investors who have gained confidence in the global economy and are seeking to capture the growth opportunities taking place around the world. With the European crisis comfortably in the rear view mirror and global central banks taking the position that they will continue their easing policies, investors have taken their foot off the brake and have begun to accelerate….We see more sunshine and less stormy weather ahead [and explain why that is the case in this article]. Words: 695; Charts: 3

7. Start Investing In Equities – Your Future Self May Thank You. Here’s Why

8. What Recovery? Contradictions Between Reality & Political Claims Are Everywhere!

10. Will We See Real Economic Growth or a Real Decline in World Stock Markets? That is the Trillion Dollar Question

Without economic growth, and real economic growth at that, there can be no meaningful long-term economic recovery in the developed countries.  Growth or lack thereof will have to be reflected in the financial markets over time.  Currently, I continue to see a disconnect between where the financial markets are pricing things, and where I think they ought to be pricing things. Words: 784

11. This False Stock Market Bubble Will Burst, Major Banks Will Fail & the Financial System Will Implode! Here’s Why

12. 5 Sound Reasons Investors Would Be Better Off On the Sidelines Than In the Market

13. The S&P 500 Continues to Rapidly Build Its “Domed House” As Projected

The broad stock market is on its way to building a “Domed House” and to challenge multi-year highs, or even all-time highs, in the process. Based on the forecast of my proprietary Long Wave Index, the broad market should be in a short-term bullish time-window until 1/17/2013. Words: 634; Charts: 2

15. 3 Reasons the Stock Market Could Rally & 3 Reasons to Be Cautious Near Term

The U.S. stock market rally that kicked off the New Year continued last week, and after only two weeks, US stocks are up around 3% for the year. European stocks have posted similar gains and equities in Japan have advanced even further. What’s behind this rally – and more importantly, can it continue? In my view, the rally can be attributed to three factors.  Words: 615

Mark Spitznagel…warned the other day that the S&P 500 could lose 40% of its value in the next couple of years. So what black swan event could cause the S&P 500 to drop down to 760? [Let’s take a closer look.]

Share
Previous Stocks Should Have a Record-Breaking Year According to These 7 Bullish Fundamentals
Next Commodities: How Big a Player Is Russia & How Best Can Its Strengths Be Played?