The U.S. is Headed Towards Self-inflicted Disaster: Here’s Why (+2K Views)

Iceberg Ahead: Fate of US Dollar “Titanic” Sealed by Last Week’s Budget Deal

In spite of the spending cuts secured in last week’s last-minute budget deal… we are headed for a 50-square-mile iceberg and have just turned the wheel an inch – probably less… [After all,] the $38 billion in cuts represent less than the $54 billion in new debt the U.S. racked up in just the previous week, less than 3% of this year’s projected deficit and less than 1% of what the government has projected to spend in 2011… [In fact, such inadequate action has done nothing more than]  reinforce expectations that the U.S. is headed for self-inflicted disaster. [Let me explain.] Words: 1066

So says Perry D. (http://tracktheturnaround.serenity21.com/) in an article* which Lorimer Wilson, editor of www.munKNEE.com,  has further edited ([  ]), abridged (…) and reformatted below  for the sake of clarity and brevity to ensure a fast and easy read. Please note that this paragraph must be included in any article re-posting to avoid copyright infringement. Perry  goes on to say:

The hollow drama in DC capped a week in which markets continued to abandon the dollar, with the Aussie and Canadian dollars and the Swiss Franc hitting new 52-week highs, gold hitting record highs, the CRB commodity index hitting 2 1/2 year highs, and crude hitting 30-month highs. 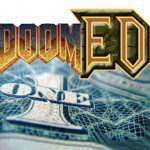 During the past 12 months:

1) The dollar has virtually lost safe-haven status. Multiple crises (from Japan’s tsunami to Middle East turmoil) have been accompanied by ominous dollar dumping rather than the kind of crisis-driven dollar-buying we used to see in the past;

3) The Federal Reserve has become the marginal buyer of most Treasuries offered in auctions over the past year in the growing absence of private-sector or foreign government buyers;

4) Skepticism of the Fed’s inflation-fighting credibility is mounting. A new Rasmussen Reports national telephone survey found 56% of adults were very concerned about the threat of inflation, up from 52% a month ago and 48% at the start [of the year]. Just 14% are not very or not at all concerned. Only 30% were at least somewhat confident in the Federal Reserve Board’s ability to keep inflation under control.

Back in January I wrote regarding the growing risk to the inflation outlook and the dollar’s purchasing power. I observed that the Federal Reserve was, and would be, under the gun in a way it hadn’t been since Paul Volcker headed the Fed through the energy crisis of the late 70’s and early 80’s going on to say that:

Today, the risk is actually greater. Back then:

In the meantime, amid growing market skepticism over America’s economic management, the federal government’s plan remains: Spend and print as much money as possible until we can’t. “The reality is…,” says economist Peter Schiff said in a recent video , “that there is no will to do anything. Nobody is willing to make any of the cuts necessary to rein in the excesses in Washington.” [Arnold Bock has written an excellent article entitled America’s Political Process Guarantees Another Financial Crisis! which you can read here.]

Keep an eye on [the following] events which are likely to be inflection points that further reinforce expectations that the U.S. is headed for self-inflicted disaster: