Welcome to the New Retirement Model – NO Retirement! Here’s Why (+4K Views)

Welcome to the new model of retirement. No retirement. In 1983 62% of American workers had some kind of defined-benefit plan. Today less than 20% have access to such a plan. Instead, the majority of retired Americans largely rely on Social Security and the 35 and younger cohort are not able to save, or save enough, to eventually retire. True retirement is now a thing of the past except for a privileged few. I support this claim in this article. Words: 1091

So says an article* posted on www.mybudget360.com.

Lorimer Wilson, editor of www.munKNEE.com (Your Key to Making Money!), has edited the article below for length and clarity – see Editor’s Note at the bottom of the page. (This paragraph must be included in any article re-posting to avoid copyright infringement.)

Defined-benefit Pension Plans Becoming Relic of the Past 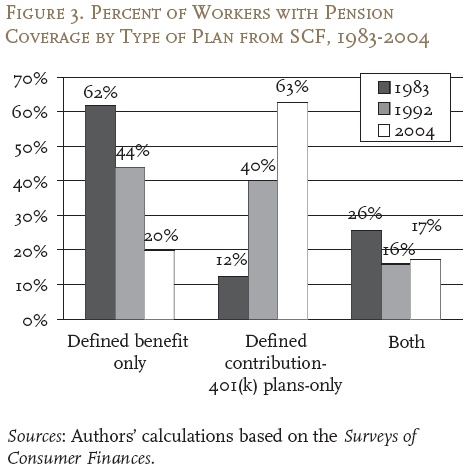 Over the last few decades Americans were promised the idea of a comfortable retirement yet none of this has materialized because of financial swindling and a real estate bubble that will go down in the record books. On the flip side, many Americans went into massive debt and consumed their future nest egg today with big purchases outside of their budgets.

So what are we left with today? We are left with over 75,000,000 baby boomers entering into retirement with very little saved. One out of three Americans has absolutely no money saved to their name. With the average worker making $25,000 a year the media designed idea of retirement is largely just another fantasy.

Many large pension funds had models built on absurdly optimistic stock and bond market returns. These accounts did well in an era where the stock market roared ferociously because of the prime position the U.S. had after World War II. [These days, however,] Americans have been forced to play the stock market game through their 401ks. This has actually turned out worse for average Americans as they try to compete with high frequency swindlers and investment banking crooks. Clearly someone is making profits as investment bankers pull down million dollar bonuses all the while the stock market has gone into reverse over a decade.

Americans Being Forced to Use Savings to Consume

Since the end of World War II many Americans were given access to debt on an unparalleled level. This ability to borrow served as a supplement to a stagnant paycheck. As time has gone on, and with the debt bubble bursting, Americans have now seen their access to borrow severely curtailed: 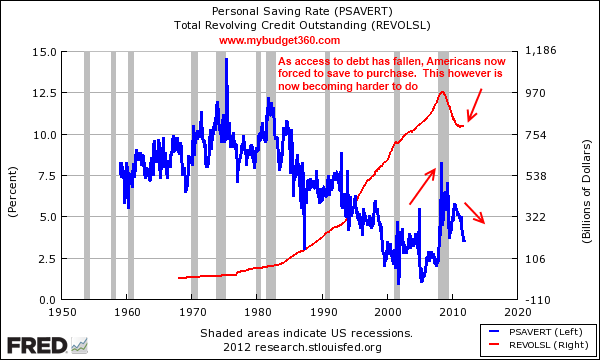 It is no coincidence that as borrowing increased the savings rate went so low as to go into negative territory for a year. However, it has recently gone up not because of choice, but because the debt bubble has popped and now many need to actually save to purchase items. This has made the recovery extremely sluggish because saving to spend on a $25,000 income is hard to do. The typical household pulling in $50,000 will have a giant portion of their funds going to housing, food, energy, and healthcare before any discretionary spending is done.

What Does the Future Hold for Retirement?

Current/Approaching Retirees: Many Americans rely completely on Social Security for their retirement. The idea of sipping unlimited Margaritas on some Caribbean island is largely a myth. Over 58,000,000 Americans receive some benefit from Social Security and most rely on this payment as their primary source of income in retirement. Remember that only one out of three Americans have even a penny to their name?

35 and Younger Crowd: Do you think the young with a tougher market are saving enough?

Stagnant/Declining Stock Market Returns: The problem is only going to be exacerbated with this upcoming generation as they try to invest in their 401ks (if they can) into a stagnant and declining stock market. It is looking more and more that those assured 7 to 8 percent historical returns were largely a mathematical aberration thanks to a strong position after World War II. The big gains now are largely allocated to the well connected financial sector and our wealthier politicians that simply represent the interests of special lobbyists and groups.

1. How Much Do Americans Earn?

Americans spend more time planning their vacations than their retirement and this is the reason why 1 out 7 baby boomers are going bankrupt. With people living longer and spending as much as 30 years in retirement, if you want to maintain a moderate standard of living, it is essential to plan your retirement well in advance to secure your golden years.This article outlines 6 ways to do just that. Words: 665