Lorimer Wilson June 4, 2012 Comments Off on The Lessons Learned from 2008 Will Maximize Returns and Protect Your Assets This Time Round (+2K Views) 2,412 Views

So says Richard R in edited excerpts from his article* as posted in its entirety on Seeking Alpha.

Lorimer Wilson, editor of www.munKNEE.com (Your Key to Making Money!), has edited the article below for length and clarity – see Editor’s Note at the bottom of the page. This, and the preceding paragraph, must be included in any article re-posting to avoid copyright infringement.

Richard goes on to say, in part:

[When doing such a review] it is very important to take notice of:

Who got hit first?

It´s a common myth that gold is a “safe-haven” because of its limited quantity and other qualities that gold bugs would love to tell you all about [Read: If You Don’t Think Gold IS a ‘Safe Haven’ Then You Don’t Know the Meaning of the Term!] but GLD has proven quite the contrary, being the first market to be hit by the 2008 financial crisis [Read: Why Does Gold Fall When Financial Crises Worsen?]. When the perceived risks are high, commodities get sold first.

The sell-off…started in late July 2008, and was the first sign that something was not right. As seen on the chart [below], GLD bottomed on November 2008 (4 months before equities did), and started a multi-year bull market that [looks] to more than double its 2008 low. 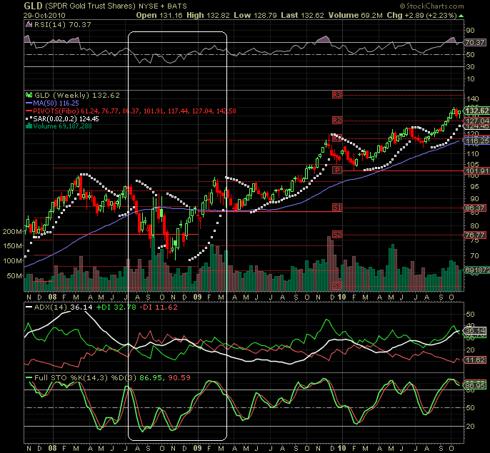 SPY was the next market to react

[As can be seen in the chart below] SPY´s first big weekly decline happened during the first weeks of September 2008, 2 months after GLD started its decline. 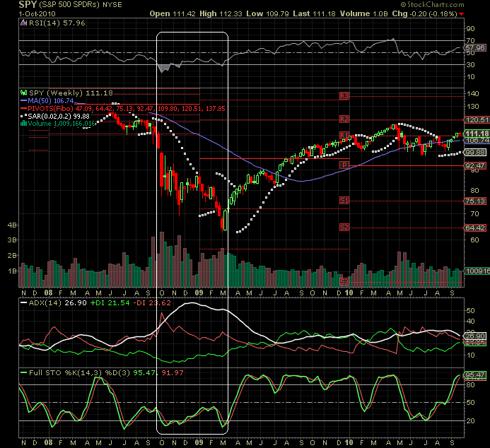 If you had exited long SPY positions in late July 2008 when GLD was being sold-off, you would have spared yourself a -47% impact to your portfolio.

How did bonds react?

The bond market was the last of these markets to react. Participants were scared of falling prices in risky assets such as Gold and U.S. equities , so they sold these risky assets and then rushed to buy bonds….[Infact,] TLT made a 30% move to the upside from mid-November to mid-December. A month is all it takes for panic to get prices to ridiculous and unsustainable levels.

After reaching record-highs, bond prices kept falling from mid-December 2008 to March 2009; returning to levels seen before the flight-to-safety sent bond prices soaring. The timing was perfect. This decline in TLT prices by itself gave a big buy-signal, money was moving from bonds back to risky assets such as SPY and GLD, which started a multi-year rally for these 2 ETF´s. The risk trade was on. 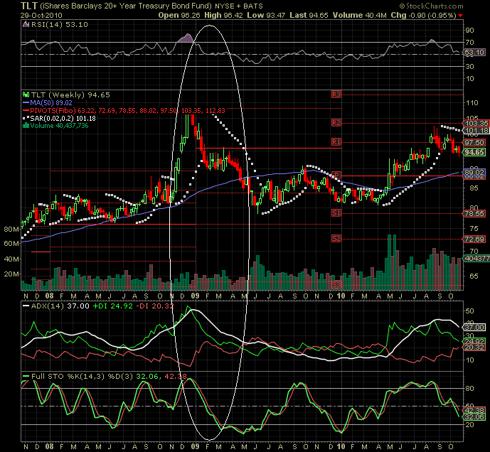 What are these 3 markets saying now?

A 15% decline in GLD that started in mid-February [see chart below] is the first warning sign that a sell-off in bonds and equities is starting again; especially now that GLD broke its 50 week moving average (WMA) (blue line). This had not happened since (care to guess?): August 2008. 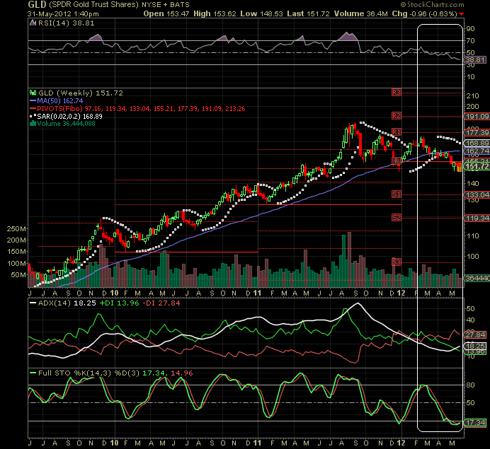 Is it SPY´s turn to fall?

As you can see in the graph below, 2 months after GLD started declining, it was SPY´s turn to start declining [Read: We’re In For a “Bummer of a Summer” – Here’s Why]. Also note that piercing below the 50WMA is a bad sign, just like what happened in 2008. [Read: These 48 Stocks Performed Best in Previous 4 Market Corrections/Crashes – Should Any Be In Your Portfolio?] 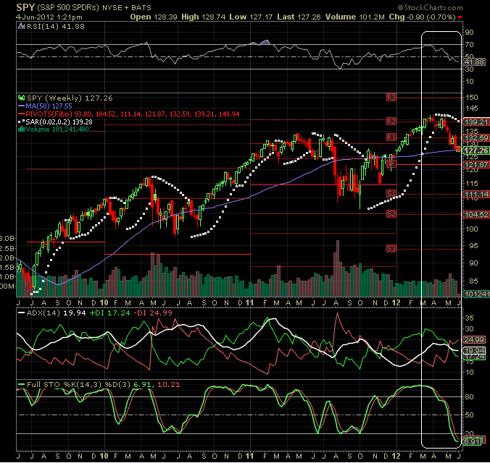 The big decline I am expecting…has not come yet, but is so close you can smell the fear about Europe´s final resolution regarding the “Grexit” and Spain’s…need to be bailed out by the ECB [Read: 4 Reasons Europe is a Major Risk for U.S. Stocks] which are, …among many other economical, political and war-related problems, [things that] Mr. Market does not like.

The bonds: Waking up and smelling the coffee

As happened [back in 2008], it is now time for the U.S. bond market to react to the fear, as investors take money out of risky assets such as commodities and equities and go to the “safest” investment: bonds. [Read: Dr. Nu Yu: MAJOR Treasury Bond Breakout Could Have Significant Influence on Equity, Commodity and Currency Markets] 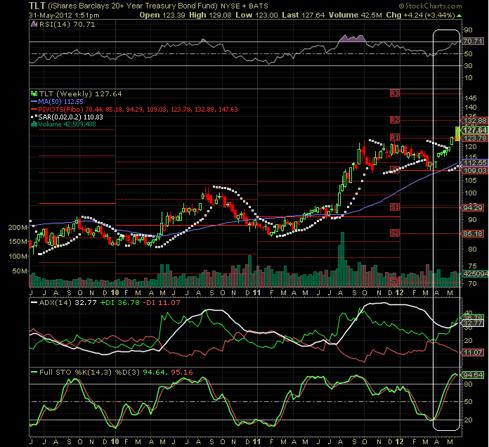 [That being said,] I do think we still have at least a month of flight-to-safety from investors, providing more room to rally for TLT. [Read: Bonds Are NOT a Safe Place to Be – Here’s Why]

How to trade this market

My take on this summer’s sell-off is simple enough: history will repeat itself, although with a smaller percent movement. [Read: This New ‘Peak Fear’ Indicator Gives You an Investment Edge]

GLD once again signaled the start of the decline in risky assets, and it will be followed by SPY. After risky assets fall, TLT will be making a quick and huge move up to all-time highs. [Read: Tom Fitzpatrick: Stocks to Go Down 27%, Bonds to Go Up to Extreme Levels, Gold to Remain Firm]

The most obvious trade right now would be: shorting SPY, going long GLD and shorting TLT. The timing is trickier though, as this sell-off is young and will need another 2-6 months to play out completely.

The safest bet right now is to:

I do expect this sell-off to be of less magnitude than the one in 2008 (that is why my targets are not lower than 100), as many of Europe´s woes are already known and various scenarios appear to be somewhat baked-in….

[Now] is the time to watch these 3 markets closely [and act appropriately when the markets so dictate].

*http://seekingalpha.com/article/638221-what-treasuries-gold-and-the-s-p-500-are-saying-houston-we-have-a-problem?source=email_macro_view&ifp=0  (To access the above article please copy the URL and paste it into your browser.)

1. If You Don’t Think Gold IS a ‘Safe Haven’ Then You Don’t Know the Meaning of the Term!

It would seem that there is a considerable lack of understanding about what the term “safe haven” actually means when it comes to gold. Let me explain just what it means – and does not mean. Words: 740

The past few years have seen the development of the notion that GLD and SLV represent uncorrelated plays on the market, making them safe haven bets for your portfolio. Looking at historical trends (aside from 2011), [however,] one would have to go back to 2007 to find a year where these two metals weren’t highly correlated to the S&P 500. For all of 2011, both ETFs have featured low correlation, but as recent trading weeks have shown, old habits die hard, as the two ETFs have fallen back into a highly correlated trend. Let’s take a look at the particulars.] Words: 672

3. Why Does Gold Fall When Financial Crises Worsen?

Why is gold falling as the financial crisis worsens? After all, isn’t gold some sort of safe haven? [Let me explain.] Words: 1287

4. Gold as a Safe Haven is Worthless!

If there is one thing we’ve learned about gold in recent years – and recent days – it is this: gold is not a haven investment… There are many theories about gold’s correction. [Let’s take a look.] Words: 781

5. 4 Reasons Europe is a Major Risk for U.S. Stocks

[While] it is true that the US economy is doing much better than Europe’s, and especially southern Europe’s, from my perspective, the trajectory of the U.S. economy and the U.S. stock market are very much tied to eurozone events. Here are four reasons why U.S. investors should not underestimate the potential impact of events in Europe. Words: 450

The recent breakout of the 30-year U.S. Treasury Bond suggests that the treasury bond price may behave differently than the way it has done so for 20 years. The trend of fast rising prices of the treasury bond could have a significant influence on equity, commodity, and currency markets with a new puzzle of intermarket relationships. [Let’s take a look at where each sector currently is and, upon analysis, where each is trending.] Words: 1476

7. These 48 Stocks Performed Best in Previous 4 Market Corrections/Crashes – Should Any Be In Your Portfolio?

As investors become more and more worried about the world economy…it makes sense to us to look into stocks that held up best in periods of market decline. Managing risk is as important as reaching for return. One aspect of managing for risk is the past behavior of particular stocks in negative market periods. Toward that end, we identified four key, recent down periods for the S&P 500, and identified those liquid stocks that were in the top quartile for price return in each of those four periods, and did at least as well as the S&P 500 index in the 2008 crash period. [Take a look!] Words: 620

For those who think bonds are a safe place to be, you might want to reconsider. In addition to rising sovereign risk (yes, for the U.S. as well as other countries), there is interest rate risk….[should you not] hold it to maturity. If interest rates rise, then the value of your bond falls (Bonds can produce capital gains/losses, just like stocks.) and the possibility of interest rates rising is pretty good. Words: 530

9. This New ‘Peak Fear’ Indicator Gives You an Investment Edge

We are in for another bummer of a summer, with the Dow tumbling over the next several months to the 12,000-12,200 range…. [Let me explain why and how best to protect your portfolio and profit from what is unfolding.] Words: 580

11. Tom Fitzpatrick: Stocks to Go Down 27%, Bonds to Go Up to Extreme Levels, Gold to Remain Firm

A top analyst at Citibank has told King World News that global stock markets are set to plunge 27%…the panic will move global bond markets to extreme levels, but gold will remain firm.

Share
Previous Major USD Downside Correction Coming Soon? "Crowded Trade" Suggests So
Next European Union Will Collapse Before the End of 2012: This is NOT Doom & Gloom – This IS Reality!