The "Great Crisis" Is Well On Its Way and Will Make 2008 Look Like a Joke!

For over two years now, I’ve been warning that the 2008 Crash was just a warm

up and that the REAL Crisis would occur when the stock market realized that the Central Banks, lead by the US Federal  Reserve, could NOT actually hold the financial system together. Well, the Crisis I’ve been warning about is here. [Let me explain.] Words: 306

So says Graham Summers (www.gainspainscapital.com) in edited excerpts from his most recent newsletter mailing (subscription is free) entitled Has the Next Round of the Great Crisis Begun?

Below is the chart of the S&P 500 since the day QE 3 was announced. As you can see, stocks are DOWN. 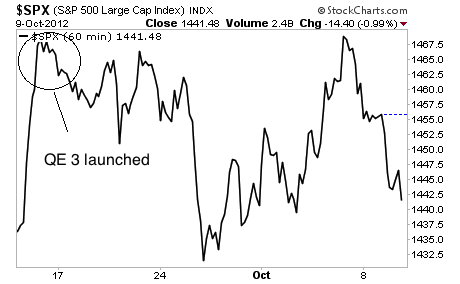 Let that sink in for a moment… the US Federal Reserve has announced an unlimited program and stocks have FALLEN.

The same is true in Europe where the ECB announced an unlimited bond buying and Europe’s most troubled market, the Spanish Ibex, has FALLEN. 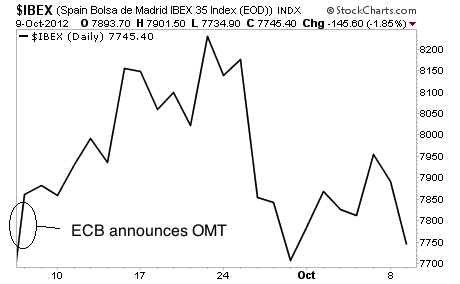 …[There you have it!] Both the Fed and the ECB, the two most important Central Banks in the world, have announced unlimited money printing programs and the markets are DOWN.

Now this doesn’t mean that the markets will implode tomorrow or next week… but this is a MAJOR change of events that indicates the next round of the Great Crisis (the worse round) is well on its way.

When it hits in full force, we’re going to see:

Yes, I believe that before this mess ends, the financial system as a whole will have collapsed. [Indeed,] what’s coming is going to make 2008 look like a joke.

Many people will lose everything in this mess. Yes, everything. The U.S. is going to be defaulting on its debt and paper currencies around the world will fail. It’s going to be a dark dark time.

Editor’s Note: The above posts may have been edited ([ ]), abridged (…), and reformatted (including the title, some sub-titles and bold/italics emphases) for the sake of clarity and brevity to ensure a fast and easy read. The articles’ views and conclusions are unaltered and no personal comments have been included to maintain the integrity of the original article.

All articles are posted in edited form for the sake of clarity and brevity to ensure a fast and easy read.

Get newly posted articles delivered automatically to your inbox.

1. What Follows Will Not be Pretty for U.S. Stock Market & Financial System – Here’s Why

The US Federal Reserve, which has been the life-support for the U.S. economy (for better or for worse), is finally discovering that its policies and theories don’t actually apply [in] the real world….This means that the primary prop underneath the U.S. stock market and financial system (namely Fed intervention) is slowly being removed. What follows will not be pretty and smart investors should be taking steps now to prepare in advance. Words: 350

2. Take Note: What’s Happening in Europe Could Cause MAJOR Crisis in U.S.!

Many people have been writing in to ask me, “why are you focusing on Europe so much? Who cares about Spain?” The short answer is that everyone should care about Spain. Spain could potentially take down the banking system in Europe, which would mean the US facing a Financial Crisis at least on par with 2008. That is why Europe is a HUGE deal for everyone….We’re talking about systemic risk on a scale that would make 2008 look tiny in comparison. [Let me explain further.] Words: 674

By threatening to drop money out of helicopters to fight deflation – to leave a paperweight on the “print” button if you will – Bernanke convinced the market and all of Wall Street that the Fed would always be there to step in and save the day. [In fact, however,] the whole thing was a bluff meant to prop up the markets – the famed Bernanke Put – and it was a lie. The markets will be realizing this in the coming months, if not sooner, and when they do, we’ll see the REAL Collapse: the one to which 2008 was just a warm-up. [Let me explain.] Words: 444

The level of debt has surpassed the possibilities of being serviced. Mathematically, the debt problem cannot be solved, regardless of economic policies. That, unfortunately, is written. For it to be serviceable would be to violate the laws of mathematics and that cannot happen. [As such, America is quickly approaching a catastrophic economic collapse. As repelling as that sounds, it’s in your own best interest to learn just how bad the situation is. This article is an attempt to do just that.] Words: 310

8. This Will NOT End Well – Enjoy It While It Lasts – Here’s Why

9. Events Accelerating Towards an Ultimate Dollar Catastrophe! Here’s Why

10. Regardless of Who Wins in November the U.S. Is Going Over the Financial Cliff! It’s Just a Matter of Time – Here’s Why