Gold miners have been [and still are] an embarrassment. A dollar put in gold five years ago would

be worth about a $1.70 today; that same dollar in Market Vectors Gold Miners ETF (GDX) would be worth only $0.80. What explains this sorry performance?

So writes Samuel Lee (www.morningstar.com) in edited excerpts from his original article* posted on seekingalpha.com entitled A Golden Cross To Bear.

This post is presented compliments of Lorimer Wilson, editor of www.FinancialArticleSummariesToday.com (A site for sore eyes and inquisitive minds), www.munKNEE.com (Your Key to Making Money!) and the Intelligence Report newsletter (It’s free – sign up here). You can also “Follow the munKNEE” daily posts on Twitter or Facebook.

The article may have been edited ([ ]), abridged (…) and/or reformatted (some sub-titles and bold/italics emphases) for the sake of clarity and brevity to ensure a fast and easy read.

Please note that this paragraph must be included in any article re-posting to avoid copyright infringement.

Lee goes on to say in further edited excerpts:

The popular story is that physically backed exchange-traded funds like SPDR Gold Shares (GLD) came along and soaked up investing dollars that otherwise would have gone to miners, depressing their valuations. While there’s some merit to the story, it doesn’t explain gold miners’:

In Exhibit 1, below, I’ve charted the cumulative total returns of the HSBC Global Gold Index and gold prices. Gold miners have for the most part tracked gold’s price but with a lot more volatility. Even counting reinvested dividends, they historically have failed to offer a reasonable long-term spread over gold’s returns. 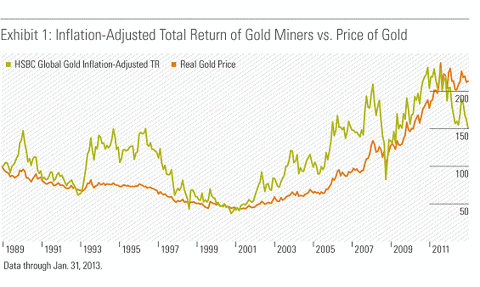 The truth is gold miners historically have been miserable capital allocators in a capital-intensive industry. If the miners had just focused on returning cash to shareholders and keeping costs down, their total return would have been much, much higher.

Exhibit 2 below shows gold miners’ real per-share dividend growth. For much of the 1990s, dividends persistently declined along with gold prices, but they only slowly grew as gold’s price marched ever upward. 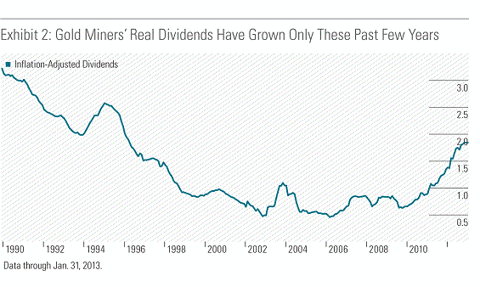 [In addition,] they issued shares to fund their spending sprees. From the beginning of 2005 to the end of 2012, gold miners’ aggregate market cap grew by more than 16.0% annualized, while their aggregate price grew only about 7.7% annualized. The 8.0% annualized gap between market cap and price performance represents share dilution. Share issuances often signal future underperformance, in part because managers time the market to sell at peaks and, in part, because firms often fail to realize the expected benefits of major capital expenditures. 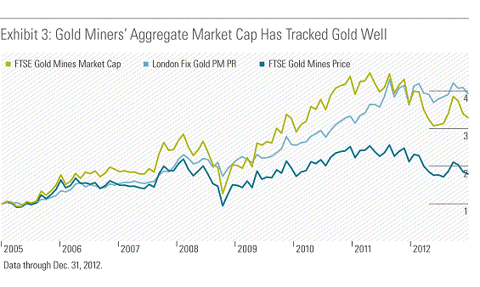 [The above chart] should be a splash of cold water for those who believe the gold/miner price ratio tends to converge on its long-run average. In all fairness, over short periods, the ratio does seem range bound, such as from mid-2006 to mid-2008, when the GLD/GDX ratio hovered between 1.5 and 2.0, and it exhibited strong mean reversion after it spiked during the financial crisis. However, the ratio is misleading when compared with its average over longer periods; the gold price/aggregate market-cap ratio does a better job explaining gold miners’ movements. Incidentally, this ratio is signaling that gold miners are oversold right now.

Send the article URL to editor{at}munKNEE{dot}com

Receive a “Hat Tip” should it get posted

Your own articles are welcome too!

Despite seemingly attractive fundamentals and technicals, the gold-mining sector has terrible structural features that should give the long-term investor pause:

It’s generally not a good idea to own firms that require large capital expenditures under conditions of high uncertainty, especially when their managers have such a storied history of incompetence, because:

These aren’t insoluble problems, of course….[but] few gold miners have shown an obsessive focus on prudent capital allocation and sustainable growth over as long a period. Of those firms that Morningstar equity analysts cover, only Randgold Resources (GOLD) and Eldorado Gold Corp (ELD) earn the highest stewardship rating of exemplary and Morningstar’s research states that only Eldorado Gold has an economic moat, “which is largely attributable to [the] management team amassing a portfolio of low-cost, long-life mining assets without paying an arm and a leg in terms of capital spending.” However, both firms were founded in the 1990s, whereas gold-mining has been a business for centuries. Where did all the wide-moat firms of yesteryear go? Maybe they never existed.

Though many gold miners are cleaning house, and new managers are solemnly swearing to forgo the vices of the past, you can be sure that the CEOs preaching virtue will be sorely tempted to acquire even more mines should the good times come back. They are only human. For now, though, miner yields are the highest they’ve been in years, and dividends are growing at a nice clip.

In the short and medium terms, gold miners look like a decent buy for what you’re getting: A source of returns relatively uncorrelated to the stock and bond markets. In the long run, however, it’s not clear whether the miners’ ample cash flows will be returned to shareholders or sacrificed to the institutional imperative.

I’m not a fan of betting against human nature.

*http://seekingalpha.com/article/1309011-a-golden-cross-to-bear; © 2013 Seeking Alpha (A version of this article ran in the February 2013 issue of Morningstar ETFInvestor)

Did you enjoy this article?

If so then stop surfing the net looking for more informative articles.

Only the best-of-the-best are posted on munKNEE.com!

Sign up here to receive them all via our Intelligence Report newsletter.

The mailing is free and restricted to active subscribers.

3 critical drivers for gold, silver and their relative securities [are once again enticing] investors to…take stakes here. These catalysts…affect both the short-term and long-term, and so, at the very least, a floor may be developing.

Looking at the recent Gold Miners price action and crash-like conditions, I cannot hide my excitement. As we judge the recent cyclical bear market within the longer term secular uptrend, we can see that Gold Miners are becoming very attractive. Whether it is the technically oversold levels that only occur a handful of times over a generation, the rock bottom valuations on nominal or relative basis, or the extreme sentiment that the overall sector is going through, all of these indicators point to one conclusion: we are fast approaching a major buying opportunity. [I support that contention below with the use of 8 charts and a full explanation of each.] Words: 1133; Charts: 8

4. Gold Stocks Go Up Dramatically In Inauguration Years – Will Another +20% Increase Occur This Year?