So asks Suzy Khimm (www.washingtonpost.com/blogs/) in excerpts from one article* with charts from another article** by Dave Jones (http://motherjones.com).

Lorimer Wilson, editor of www.munKNEE.com (Your Key to Making Money!), has further edited ([ ]), abridged (…) and reformatted both articles below for the sake of clarity and brevity to ensure a fast and easy read. The author’s views and conclusions are unaltered and no personal comments have been included to maintain the integrity of the original article. Please note that this paragraph must be included in any article re-posting to avoid copyright infringement.


The article goes on to say, in part:

The first chart takes a look at the occupations of the top 1 percent of incomes in 2005, as calculated in a paper by Jon Bakija, Adam Cole and Bradley T. Heim. What’s notable is that there are more non-financial-sector business xecutives and medical professionals in the top 1 percent of households than people who actually work in finance — the sector that’s been the most explicit target of the Occupy Wall Street protests. In other words, it’s a more complex and heterogeneous group than the image of the 1 percent that’s been popularized by the 99 percenters. [Take a look.] 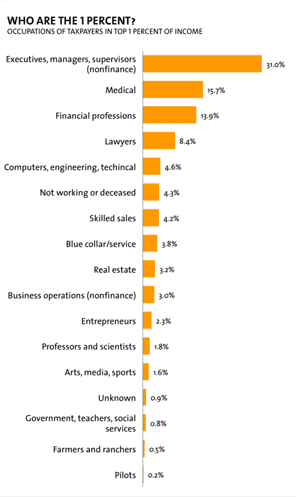 When you look at the very richest Americans — the top 0.1 percent of households by income — then business executives and financial professions do take the lion’s share, and they’ve been pulling away from the rest much faster. The paper’s authors write:

[Jones adds in his article that] you can’t beat this chart for the most dramatic measure of just how wide the gap between the tippy-top and the 99 percent has become. While incomes for the superrich have skyrocketed [$1,530,733 in 2010 vs. $1,137,684 in 2008] in the past three decades, most Americans’ have flatlined.

1. New Report Confirms that “Occupy Wall Street”  Has a Point Regarding Income Inequality in America

Of all the many banners being waved around the world by disgruntled protesters from Chile to Australia the one that reads, “We Are the 99%” is the catchiest. It is purposefully vague, but it is also underpinned by some solid economics. A report from the Congressional Budget Office (CBO)… confirms the contentions of the 99% that a system that works well for the very richest has delivered returns on labour that are disappointing for everyone else and that the people at the top have made out like bandits over the past few decades, and that now everyone else must pick up the bill. [Take a look at the graph which shows just how unequal income distribution is in the USA.] Words: 776

2. How the Wealth of Canadians, Americans, Brits and Aussies Compare

Countries differ greatly in the levels and pattern of wealth holdings…In this article…we highlight those of Canada, the United States, the United Kingdom and Australia. [Take a look at the results of our extensive research.] Words: 1314

3. Americans! Where’s the Outrage Regarding Your Financial Situation?

Most Americans don’t understand what is happening because neither the mainstream media nor our politicians are telling them the truth. We are being told that we just need to accept our lower standard of living and most Americans seem willing to accept that reality because they keep sending most of the exact same bozos back to Washington D.C….Why are the majority of Americans not screaming to their political “representatives” that they are as mad as hell and not willing to take it any more? Words: 1270

4. America: The 42nd Most Unequal Country in the World!

[Remember the song by The Barenaked Ladies called “If I Had a Million Dollars“? Well, if you were one of the many ultra-wealthy around the world who were worth billions (see list) and earns billions of dollars each year, year after year, where could you possibly spend such riches? Well, frankly, even being very extravagant, it actually is surprisingly difficult to spend that much money – and there’s the rub. While this article, on one hand, outlines where  and how a billionaire could make a small dent in his fortune (the uplifting part) it outlines, on the other hand, just how concentrated wealth is in the U.S. these days and the adverse effect such a concentration is having on our society.] Words: 2156

The Rich are NOT Paying Their Fair Share of Income Tax

Over the last half century, the richest Americans have shifted the burden of the federal individual income tax off themselves and onto everybody else – dramatically!  At a time of national economic crisis, especially, they can and should contribute far more in taxes. [Let me show you the extent of this massive redistribution of wealth so you decide for yourself if this is, indeed, the case.] Words: 1140

6. Never Have SO Few Owned SO Much – Where Do You Place in the Wealth Hierarchy?

[The fact that] the top 1% has prospered incredibly while the bottom 99% have been screwed royally is supported by countless data.  New data show this is a global phenomenon and that even in the worst of economic times the wealthiest make out like the bandits they are, and there are a lot more of them than 1%. [Let’s take a look at what the data actually says.] Words: 781
Share
Previous It’s Silver’s Time: Sales of Silver Coins Soaring; Price of Silver About to Soar! (+2K Views)
Next Move Over Visa, Mastercard and PayPal! Here Comes a Better Alternative – Dwolla (+2K Views)