The Great Stagnation of 2011

[The economic news is not very encouraging these days. Everywhere I’ve looked, and I’ve looked at 10 different indicators (surveys, polls and indexes), things appear to be either down or stagnant. Let me be more explicit.] Words: 1058

So says Econophile, Jeff Harding, (www.dailycapitalist.com)  in excerpts from an article* which Lorimer Wilson, editor of www.munKNEE.com

(It’s all about Money!), has further edited ([  ]), abridged (…) and reformatted below  for the sake of clarity and brevity to ensure a fast and easy read. Please note that this paragraph must be included in any article re-posting to avoid copyright infringement.  Harding goes on to say: 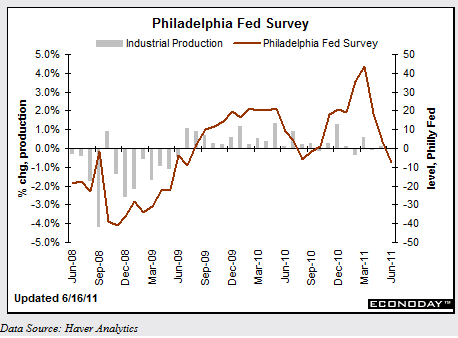 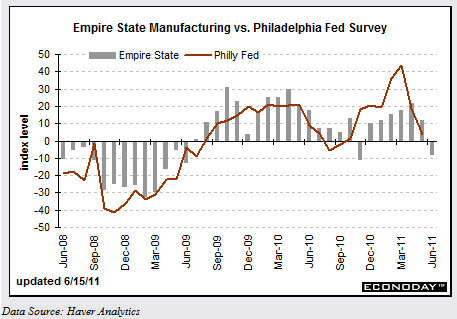 The index of industrial production as announced by the Fed was flat in May, up 0.1%, but the year-over-year trend was still declining: 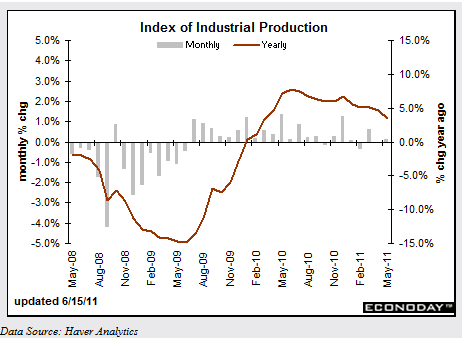 [While] all production is aimed at consumer consumption, looking at consumption alone is not as good an indicator of real organic economic growth as is the production side of the economy…[because] production usually leads consumption out of an economic slump, not the other way around. The Fed’s and the Administration’s attempts at monetary and fiscal stimulus haven’t worked because of their misplaced emphasis on consumption. They don’t examine the issue of why people aren’t consuming…The keys to new economic growth are savings, debt reduction, and the liquidation of malinvested projects. People aren’t going to spend until they feel they are economically secure and there aren’t a lot of reasons right now for them to feel secure – and the data shows it.

Retail sales for May came out slightly negative (-0.2%), but that is a bit misleading. Here is the chart: 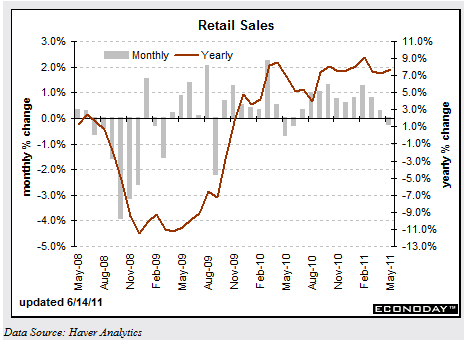 The trend has been flat-to-negative since January, 2011. For several reasons economists like to strip out auto sales, a big ticket item that may skew the data. Doing that, excluding autos, retail sales were up 0.3%. Again the data is confusing because the excluding auto data still includes gasoline sales which were up 22.3% YoY. Gains were seen in health care, building materials, miscellaneous retailers, and non-store (Internet) retailers.

The PPI and CPI reports also came in last week. Starting at the producer level, the PPI increase moderated to a 0.2% gain (core, excluding energy and food, up 0.2%) but the year-over-year trend was still up 7.0% in May (excluding  energy and food, up 2.1%). The PPI has been declining since January, 2011, but the rate of increase is still high: 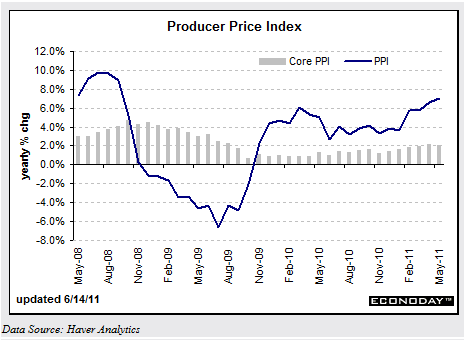 The May CPI also was up 0.2%, slightly less than in April, but still a strong upward trend as shown in this YoY chart (up 3.2% YoY): 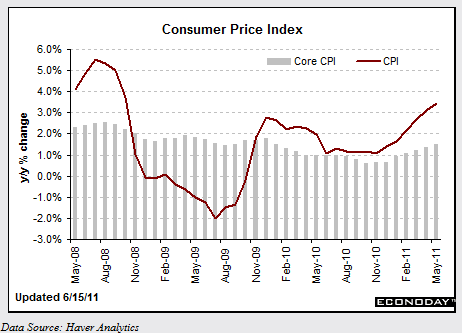 Excluding energy and food, it was up 0.3% for the month, and 1.5% YoY. Apparel, shelter, new vehicles, and recreation were all up, but energy and gasoline were down along with airline fares, tobacco, and personal care. This price inflation may seem mild to the casual observer, but it is the trendline that is important.

The Misery Index was created back in the 1970s and is described thusly:

It is simply the unemployment rate added to the inflation rate. It is assumed that both a higher rate of unemployment and a worsening of inflation both create economic and social costs for a country. A combination of rising inflation and more people out of work implies a deterioration in economic performance and a rise in the misery index.

The Index is now at 12.16. To put this in perspective, it was at its highest, 20.76 during the Carter Administration, and hasn’t been this high since 1983 (it declined after Reagan was elected). Its lowest points were 3.53 during the Eisenhower Administration (1953) and again during the Clinton years, 6.05 in 1998. This has resulted in a decline in consumer confidence.

“Corporate profits may be at a record high, but businesses on Main Street are still scraping by,” said NFIB chief economist Bill Dunkelberg [going on to say] “For the third month running, several key economic indicators continued their downward tumble.

Driving the economic uncertainty [is the fact that] one in four owners still report weak sales as their top business problem (followed by taxes and regulations and red tape [while] only 3 percent cite financing).

The most important thing among these data was the lack of capital spending: Capital spending remains historically low in spite of very low interest rates and all sorts of expensing incentives. Fifty percent of firms reported making capital expenditures over the past six months, and the percent of owners planning capital outlays in the next 3 to 6 months fell 1 point to 20 percent, a recession level reading.”

What does all this mean? It means that the foundry of job creation for one-half of the new jobs created in America, small businesses, are stalling out again because of all the factors discussed above. Also, I wouldn’t expect a lot of job growth from the multinationals as not even a declining dollar can offset the cooling-off of demand from money-stimulated countries like China, India, and Brazil.

Consumers aren’t going to save our economy from stagnation [which] will continue along with inflation…[and their is still] a likelihood of QE3.